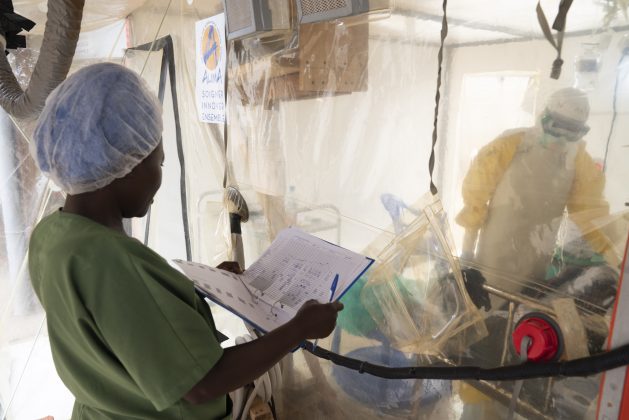 Health workers inside a "CUBE" talk to an Ebola patient, while a nurse consults a chart outside. ALIMA Ebola Treatment Centre, Beni, Democratic Republic of the Congo. Two drugs have been found to successfully treat the Ebola virus. Aid agencies have welcomed the news saying it allows communities to access early treatment. Courtesy: World Health Organisation (WHO)

COTONOU, Benin, Aug 20 2019 (IPS) - While people in the Democratic Republic of Congo (DRC) are slowly being made aware that scientists have discovered two drugs that are effective in treating Ebola, letting go of the fear and anxiety that has prevailed across the country this year will require more work.

After several months of intense research, mAb114 and REGN-EB3, two out of four drugs tested, where found to have been effective in a clinical trial, according to a joint statement on Aug. 12 by the World Health Organisation (WHO), DRC’s National Institute for Biomedical Research (INRB) and Ministry of Health, National Institute of Allergy and Infectious Diseases (NIAID).

It is the first ever multi-drug trial for the deadly virus.

The deadly hemorrhagic fever has claimed the lives of 1,800 people since last August.

“This is very good news for patients,” Dr Esther Sterk, Médecins Sans Frontières (MSF) Adviser for Tropical Diseases, told IPS. “It is good that these two drugs are recommended because not only do we expect them to improve their chances of survival, but they are also easier for medical staff to administer.”

The complexities of receiving treatment

But the latest outbreak of the deadly virus has resulted in fear among local communities. With the epicentres of the outbreak largely centred in conflict-ridden areas, communities there have been fearful and mistrustful of the virus and medical workers. Many also found the process of screening for the disease reportedly intimidating.

And on Aug. 13, residents in Goma, the capital of North Kivu province and a city of two million people overlooking Gisenyi in neighbouring Rwanda, was overrun by protestors after the news spread that two Ebola patients were been healed and discharged from the treatment centres.

“People misunderstood it, and thought the government and white people were plotting to infect us all with Ebola by letting these patients go home. It is only later in the day that we were told that these people were free to go because they were treated with a new cure that has just been found,” Christian Kasereka, an informal trader, told IPS.

In July, Marixie Mercado, United Nations Children’s Agency (UNICEF) spokesperson told IPS that, “the Ebola outbreak is taking place in an extremely complex operational environment and the response must of course factor in political, security, and socio-cultural challenges”.

She said that UNICEF was leading the work on community engagement. “We work with a broad swathe of influential community and religious leaders, mass media, schools, and Ebola survivors, to bring crucial knowledge on symptoms, prevention and treatment, to the households and communities most at-risk.

“We are learning from intensive, ongoing research and analysis of community feedback to better understand local needs, fears and concerns, and to adapt the response in ways that are socially and culturally acceptable. There is growing community ownership over the response, but far more is needed,” Mercado said at the time.

Greater community ownership and understanding needed to stop the outbreak

The Goma protests offered truth to her words that more still needs to be done.

Other international health agencies have the same view.

Sterk did caution that while the drugs improved the chances of survival of patients, teams working on the ground could not relax as ways to reduce transmission needed to be found.

“While this is welcome news, it alone, won’t end the Ebola outbreak. We still urgently need to find a way to cut transmission, which requires placing affected communities at the centre of the response by prioritising their healthcare needs and rethinking the current failing response strategies,” Sterk told IPS.

“We expect that using the two most successful treatments will improve the outcome for patients, but the challenges remain there: to break the chain of transmission, to improve the follow-up of contacts, to encourage people to report to a health facility as early as possible when the symptoms appear, to support the healthcare infrastructure in the region so that access to general healthcare is preserved during this difficult time.”

The WHO had echoed these concerns in its statement last week stating that not enough people were being treated. Currently people take 5 to 6 days before seeking treatment.

Euloge Ishimwe, International Federation of Red Cross and Red Crescent Societies (IFRC) head of communications for Africa region, told IPS that people with symptoms often delay or avoid going to a health facility or an Ebola treatment centre, placing their families and communities at risk.

“This also has critical impacts on our work with communities. If communities are engaged and understand the treatment as well as see more people surviving from the disease, they are more likely to seek health care early,” Ishimwe said, adding that the findings were a pinnacle moment in the Ebola response, as it allowed communities to access early treatment.

MSF has worked alongside several partners under the supervision of the WHO and took part in the implementation of the trials while supporting the Ebola treatment centres in Katwa and Butembo between January and February this year.

The study has since stopped and the successful drugs are being administered to all those affected.

“We must move forward to implement the outcomes of this research. We will continue to conduct rigorous research with our partners. We’ll incorporate those findings into the outbreak response through a variety of prevention and control strategies,” Dr Mike Ryan, WHO Executive Director for Emergencies Programme, had said in a statement.

Highlights of the latest outbreak:

Professor Jean-Jacques Muyembe, director general of DRC’s National Institute for Biomedical Research (INRB), and a co-discoverer of Ebola in 1976, said that the city of Goma was now out of danger since about 200 contacts and suspected cases have been identified. “We are waiting for the latest results and monitoring as the points of entry to the city are being reinforced.”

IFRC Africa’s Ishimwe said the Ebola outbreak was far from over. “This news doesn’t mean it’s over – there is still a lot of work to do. We must stay the course until the last case is treated and the region is declared Ebola-free.”

But Anita Masudi, a resident from Butembo, North Kivu, one of the epicentres of the Ebola outbreak, is relieved.

She told IPS: “Oh yes, we are very happy about what’s happening out there though I’m not sure if  everyone can now relax hoping that it’s the end of Ebola in the North Kivu. Nevertheless, I’m not afraid any more.”