UNITED NATIONS, Nov 22 2019 (IPS) - When a coalition of international donors pledged more than $650 million to provide assistance to over 300 million smallholder farmers in developing countries, the primary aim was to help increase agricultural and livestock production besieged by droughts, floods and other natural disasters triggered by climate change– mostly in sub-Saharan Africa and South Asia.

Asked if the ultimate aim is to help eradicate extreme hunger by 2030, as spelled out in the UN’s Sustainable Development Goals (SDGs), Sonja Vermeulen, Director of Programs, CGIAR System Organization, told IPS that hunger is very highly concentrated – with higher per capita in Africa and South Asia, and in rural areas.

She said hungry people are largely dependent on rural economies, especially agriculture, to improve their welfare and nutrition.

That’s why investments in targeted agricultural research to benefit these exact people can go much further than alternatives, she noted.

She said CGIAR, described as the world’s largest global agricultural innovation network, is actively working towards all of these targets: bringing people over the minimum calorie line, improving micronutrient nutrition, getting agriculture back within environmental limits, doubling smallholders’ productivity and incomes, and maintaining ex-situ genetic diversity of crops, livestock, fish and their wild relatives.

“Given the complexity of the problem, it’s a massive challenge to get there by 2030. But, with partners, it’s a challenge we want to rise to.”

CGIAR, which is the recipient of the $650 million funding, and formerly known as the Consultative Group for International Agricultural Research, has an annual research portfolio of just over $900 million with 11,000 staff working in more than 70 countries around the world.

“The global Sustainable Development Goals made a solemn promise to eradicate hunger and extreme poverty by 2030, and that simply cannot be achieved unless the world’s smallholder farmers can adapt to climate change,” said Elwyn Grainger-Jones, Executive Director of the CGIAR System Organization.

The new investments, he said, “are a recognition that we have just 11 growing seasons between now and 2030 and farmers need a host of new innovations to overcome a growing array of climate threats. This new funding is an important start towards a global effort to substantially increase support for CGIAR activities.” 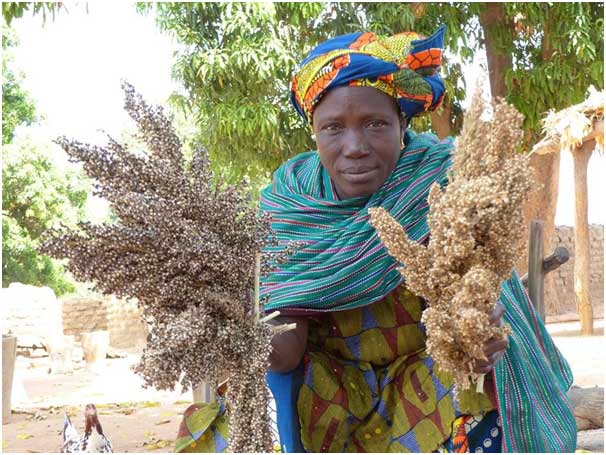 A beneficiary of a groundnut upscaling project in Mali. Credit: CGIAR

According to CGIAR, it’s climate-focused innovations include:

• Dozens of new varieties of drought-tolerant maize for farmers in sub-Saharan Africa that are increasing farmers’ yields by 20-30 percent. In Zimbabwe, maize farmers already are harvesting an additional 600 kilos or more than 1,300 pounds per hectare. Further adoption across the region will benefit 30-40 million people in 13 countries and provide added grain worth US $160-200 million per year in drought-affected areas, generating up to $1.5 billion in benefits for producers and consumers.

• Climate change-ready rice, including new “scuba rice” varieties that survive underwater for up to 17 days could benefit 18 million farming households and save millions more from hunger. In Bangladesh and India alone, rice lost to flooding each year could feed 30 million people.

• In Nigeria, improved varieties of cassava developed by CGIAR scientists already have helped 1.8 million farmers escape poverty. CGIAR breeders are now developing even better varieties of this naturally hardy crop that offer disease-resistance and higher levels of Vitamin A, a nutrient especially critical to childhood development.

• New varieties of orange-fleshed sweet potatoes developed to match a host of different farming conditions are rapidly gaining popularity in sub-Saharan Africa. They also offer high levels of Vitamin A and can survive climate stress that kills other crops. CGIAR is delivering a host of other climate-smart crop varieties, including heat- and drought-tolerant beans and improved varieties of neglected grains like pearl millet and sorghum.

• CGIAR experts are developing solar-powered irrigation pumps for large-scale distribution in sub-Saharan Africa and South Asia. The pumps are to be deployed alongside advanced information systems to ensure they can help farmers sustainably adapt to increasingly unreliable rains, but without stressing available water resources.

Asked how devastating are climate-related threats to agriculture and food security, CGIAR’s Vermeulen told IPS: “Climate threats are already massive – and with current increases in emissions, only going to get worse”.

Also problematic, she said is that “we are not very good yet at forecasting what will happen – tipping points etc. What we do know is that uncertainty will increase (e.g. year-on-year variability in rainfall) making farming a much tougher business.”

She pointed out that CGIAR’s critical work in this area includes a step change in the availability of diverse, climate-resilient crop, livestock and fish varieties for farmers (with public sector research and distribution working hand-in-hand with private sector).

It also includes harnessing inexpensive information technologies to get real-time data and advice into the hands of farmers, and improved institutional solutions for climate-affected farmers – such as cooperative-run solar irrigation systems, community-based underground water storage, affordable index-based crop insurance schemes, and management systems for human health threats like Aflatoxin, which infection level increases with climate change in staple crops like maize and groundnuts.

“These threats are global – but hurt low-income rural farming communities the most – because they don’t have the capital to invest in adaptation, and are most dependent on rainfed farming at the mercy of the climate. These are CGIAR’s clients.”

IPS: The UN says hunger– far from declining– is on the rise, primarily due to two factors: military conflicts and natural disasters triggered by climate change. Is this a fair assessment of the current state of affairs?

Vermeulen: Yes, global numbers of hungry people have been on the rise again since 2016. The UN Office for Disaster Risk Reduction reports that low income countries face losses equivalent to 20-60% of their annual social expenditure through natural disasters annually.

For food and agriculture, droughts are the most important disaster – and are on the increase. Fire, storms, floods too are devastating. They can send poor farmers into downward spirals of under-investment and failure to recover.

IPS: With a predicted rise in population, from the current 7.5 billion to 10 billion in 2050, will the world be able to meet the demand for food as we move forward? What would be CGIAR’s contribution in this field?

Vermeulen: We know now, from reports like EAT-Lancet and others, that it is possible to feed 10 billion people healthily in 2050. CGIAR’s research covers the whole package of how to get there – from the perspective of poorer people, communities and countries.

This means three big areas: improving the diets of the poorest people (including more animal products, of which they consume tiny amounts, as well as a diversity of plant foods including (non-GMO) biofortified crops to help with specific micro-nutrient deficiencies), improving food production efficiency on farms – more crop / more milk / more fish per unit of water / fertilizer / energy / land, and managing post-harvest losses and waste (for human health as well as environmental benefits).