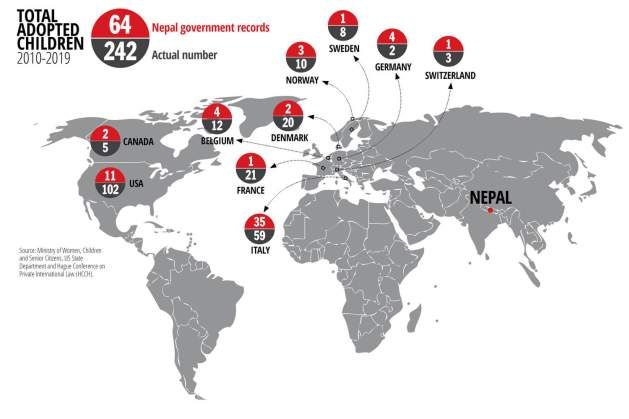 KATHMANDU, Feb 21 2020 (IPS) - A major discrepancy between Nepal government and foreign records of the number of Nepali children adopted in North America and Europe has exposed a trafficking ring that involves various child welfare agencies in Kathmandu.

The Ministry of Women, Children and Senior Citizens has records of only 64 children from Nepal sent for adoption to ten western countries from 2010 to 2019. However, a list submitted to the Hague Conference on Private International Law (HCCH) by the US Department of State and the nine other countries reveals that 242 Nepali children were taken for adoption in those nine years.

The ten countries are the United States, Denmark, France, Norway, Switzerland, Canada, Germany, Belgium, Italy and Sweden. There are 178 more Nepali children adopted internationally than the government has records for. Why the discrepancy?

“The data we have is authentic,” maintains Ministry spokesperson Gyanendra Paudel. “We have no idea how the details in other countries showed more numbers.”

But for Manju Khatiwada at the National Human Rights Commission (NHRC), this is a clear case of child trafficking. She says: “The traffickers produce fake documents and influence both the government officials and parents to smuggle the children abroad.”

Official adoptions by foreign nationals have virtually stopped after reports of corruption and payoffs were publicised in the media ten years ago. But there is a high demand for adoption, especially in western countries, and a plentiful supply of poor Nepali parents who cannot support their children, and this differential drives trafficking. Some parents are also tricked by traffickers into giving up their children.

Manju and Bhimsen Khadka from Sindhupalchok used to sell roasted corn by the roadside in Kathmandu. One day ten years ago, a neighbour named Sarita Shrestha and her husband took pity on their three boys, and offered to place two of them, Rajkumar and Balkrishna, aged 8 and 6, at a children’s shelter.

The parents agreed because it would relieve the burden of feeding and educating them. But once the children were taken from them, the shelter’s management repeatedly refused to allow Manju and Bhimsen to visit them, and even started issuing threats.

“I begged them to at least let me see my sons just once, but they said they would finish me off,” Manju Khadka recalls tearfully. The parents lodged a complaint at the NHRC, which started an investigation, and found that Rajkumar and Balkrishna had already been adopted in Italy.

Says NHRC’s Khatiwada: “It is clear that the parents were tricked into thinking their sons would be educated, but they were instead stolen and sold by the shelter, which prepared original-looking fake documents at the Nepal Children’s Organisation in Naxal.”

The NHRC notified the government, saying Bal Mandir had sent the children to Italy for adoption, and recommending that Nepal’s adoption laws and policies be amended to plug the loopholes. It also said a public awareness campaign was necessary to warn parents about child trafficking.

After malpractices were uncovered in the 2000s, the Nepal government tightened laws on adoption. According to the ‘Terms and Conditions and Process Required for Approving Adoption of a Nepali Child by an Alien – 2008,’ prospective foreign parents cannot choose the child they want to adopt.

Foreign couples wishing to adopt a Nepali child must apply through a registered international agency or their embassies in Nepal, filling out forms offering details about the age, gender and other particulars that they seek in a child. A joint secretary-led ‘Family Matching Committee’ is then assigned to find the child from shelters. Clause 14 of the Terms and Conditions stipulates that these adoptions will take place on a first-come-first-serve basis.

However, the Hague Conference on Private International Law (HCCH) documents make clear that many adoptions have skipped the whole process. The documents show that Denmark received 20 Nepali children through adoption from Nepal in the last nine years.

Numerically, the United States shows the biggest discrepancy. The State Department report reveals that 102 children were adopted from Nepal in the last nine years, but the government’s records here show only 11.

According to the Bureau of Consular Affairs of the US Department of State, an American citizen wishing to adopt a child should be at least 25 years old, and in the case of couples both husband and wife should agree to adopt the child.

Prospective parents should not have any criminal background and should meet the criteria of the country from which they seek to adopt. The fact that 91 Nepali children adopted by Americans have no records in Nepal prove that they were transported outside of legal channels. HCCH records show that Norway, Canada, Switzerland, Belgium, Sweden and Italy had similar inconsistency with Nepal government records.

Chapter 8 and Chapter 9 of the Civil Code 2017 have the provisions in accordance with the UN Convention on the Rights of the Child. And there are a slew of policies and strict regulations governing inter-country adoption.

For example, the Standards for Operation and Management of Residential Child Care Homes 2013 says it is the state’s responsibility to look after children who have lost both parents, or the children of invalid parents, provided their kin cannot take care of them. The priority is for in-country adoption, and international adoption is only a last resort.

All these legal provisions make inter-country child adoption so strict that it is inconceivable that such adoptions take place without the knowledge of several government agencies. The discrepancy of HCCH and Nepali records thus reveals that children are being trafficked abroad in the guise of adoption.

An NHRC report on Trafficking in Persons 2019 points to a nexus between orphanages, child-care centres and foreigners wishing to adopt children. The report says there are 14,864 children in 533 children’s homes all over the country. Nearly 80% of children in such centres are not orphans, and have either one or both parents.

The only government shelter for orphans is Bal Mandir and it is run by the Nepal Children’s Organisation (NCO), which provides care, nutrition and education to orphans all over the country. The NCO has been implicated in facilitating documents for illegal inter-country adoption.

In August 2019, British national Dona Smith was arrested at Kathmandu airport with a newborn baby she claimed was her daughter. Smith was carrying a birth certificate from Lalitpur Metropolitan City and the baby’s passport, issued by the British Embassy, carried her name as Anna Bella Laxmi Shrestha Smith. Smith told suspicious immigration officials that the baby’s father was Nepali.

An investigation later found out that the baby’s real mother was a rape victim who gave birth to her at Paropakar Maternity Hospital. Smith admitted to paying Bal Krishna Dangol, director of the NCO, Rs450,000 for the baby and another Rs2 million to procure the necessary documents to take her out of the country. Deputy Superintendent of Police Hobindra Bogati says Dangol was found to be involved in a larger child-trafficking network. Both Dangol and Smith are now in jail.

Police figures show more than 1,000 children were trafficked in the past five years. DSP Silwal says the children are usually bought from willing poor parents but that some parents are tricked into sending them to shelters. The traffickers then sell them to adoption brokers who make contact with foreigners eager to adopt children.

“The children who are trafficked are often from the poor and underprivileged families or are street children,” Silwal says, “Traffickers prefer them because it is easier to tempt their parents.”

NHRC Commisioner Mohna Ansari says it difficult to curb such crimes unless there is public awareness. “In our poverty-ridden society with rampant illiteracy and scarcity, parents think sending children to shelters will at least give them a good education. They are easily tempted by strangers who promise to take care of them.”

“I want to see my sons again” 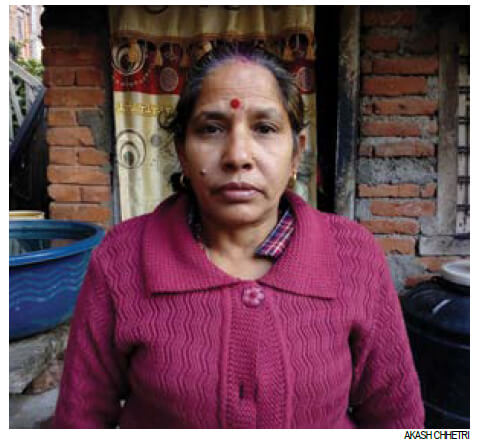 Ten years ago, two of Manju Khadka’s three sons, Ram Kumar, 8, and Bal Krishna, 6 (pictured, right) were taken to a children’s shelter by a neighbour who promised they would be educated and fed there. For three years, Khadka was repeatedly prevented from seeing them. Finally, she found out they had been adopted by a couple in Italy.

“I gave birth to them. I did not send them as babies, they were grown up and going to school,” says a tearful Khadka (pictured, above). “They threatened to finish me off.”

When she went to the police, they were rude and accused her of selling her children to the shelter. So Manju and her husband went to the National Human Rights Commission, but were unable to receive the help they needed to get their boys back. Ram Kumar and Bal Krishna are now 19 and 17 and living in Italy.

Naresh Gharti, the youngest of his family, was born in east Rukum and was growing up in Pokhara. In 2018, South Korean tourist Nara Kim got to know the Gharti family and they agreed to let her adopt Naresh.

Faced with strict rules about inter-country adoption, Nara Kim decided to take a short cut. According to the Central Investigation Bureau (CIB), Kim produced a document, certified by Pokhara Metropolitan City, showing that Naresh was her son. She got a fake birth certificate for Naresh from a hospital in Pokhara.

The South Korean Embassy in Kathmandu provided Naresh with a Korean passport  (M 72504568) based on those documents. The passport changed Naresh’s name to Chanorang Kim. The last stop was to get a visa for Naresh at the Department of Immigration where officials got suspicious. Both Kim and Naresh were arrested at Kathmandu airport while trying to fly out in May 2019. Kim is in jail awaiting trial.