COVID-19 Deaths Before A Vaccine? 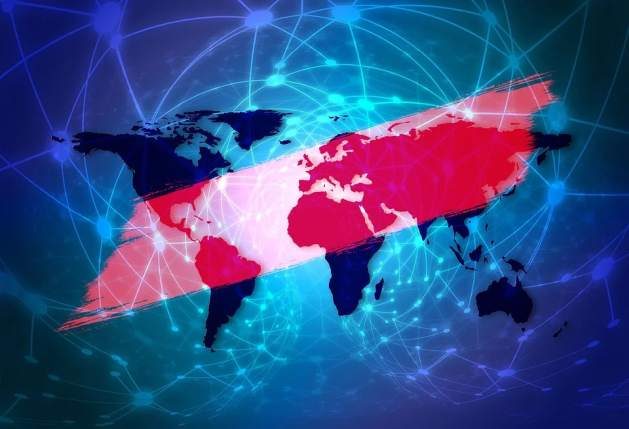 NEW YORK, May 4 2020 (IPS) - How many COVID-19 deaths will occur before a vaccine becomes available worldwide? As with many seemingly simple questions about an uncertain future, the proper answer to that important query is: “it depends”.

The total worldwide number of deaths from COVID-19 before a vaccine, reported to be nearly a quarter-million at the end of April and amounting to a five-fold increase since the start of April, is hard to predict. It depends on a host of critical factors, many of which are not well understood and are changing rapidly.

In the absence of a vaccine and limited success in limiting the spread of COVID-19, the percent of the world’s population becoming infected could reach 70 percent, the level roughly estimated to reach herd immunity. With an infection level of 70 percent and a 1 percent fatality rate, the resulting number of deaths from COVID-19 is 55 million, or about 0.7 percent of the world’s population

Among those factors are the pandemic’s duration, the dissemination of the disease, the contagiousness and fatality of the virus, the virus’ basic reproductive rate (R0), human bodily responses, access to and quality of health care, available treatments for the illness, immunity after the illness, population susceptibility and the effectiveness of mitigation policies to reduce the virus’ spread.

The true number of deaths due to Covid-19 deaths will likely never be known precisely for several reasons. Many COVID-19 deaths will go undercounted and underreported, some deliberately by government authorities and others missed due to weak vital statistics reporting systems. Also, specifying the cause of death is not always straightforward and clear as multiple causes may be involved in a person’s death.

Clearly, the worldwide availability of an effective vaccine against COVID-19 remains the utmost priority in defeating the pandemic. Scientists around the world are actively working on vaccines for COVID-19 as well as potential treatments for the illness.

To date, there is no vaccine for COVID-19 and no specific antiviral medicines against the disease. Although hopeful signs are emerging, most experts expect that a vaccine that would be administered widely on a global scale is unlikely to occur before 2021. In addition, even if a vaccine were discovered and made available, it is not clear how long the immunity to the disease might last.

Up until the time when an effective vaccine becomes accessible and affordable worldwide, the number of COVID-19 deaths will be determined largely by two critical factors. The first is the percent of the world’s population who will become infected, both those who become ill and those who are asymptomatic. And the second critical factor determining the number of COVID-19 deaths is the percent of those infected who will die from the illness.

At this early point in the pandemic’s spread, government officials, public health experts and statistical modelers face the serious risks of both underestimating and overestimating the expected numbers of infections and deaths from COVID-19.

Some for political, economic, public order and related reasons tend to gravitate towards lower estimated numbers of COVID-19 infections and fatalities. Others who are concerned about being unprepared, undersupplied and overwhelmed by the disease, as well as the serious underreporting of coronavirus deaths, tend to lean towards higher estimates of COVID-19 deaths and infections. 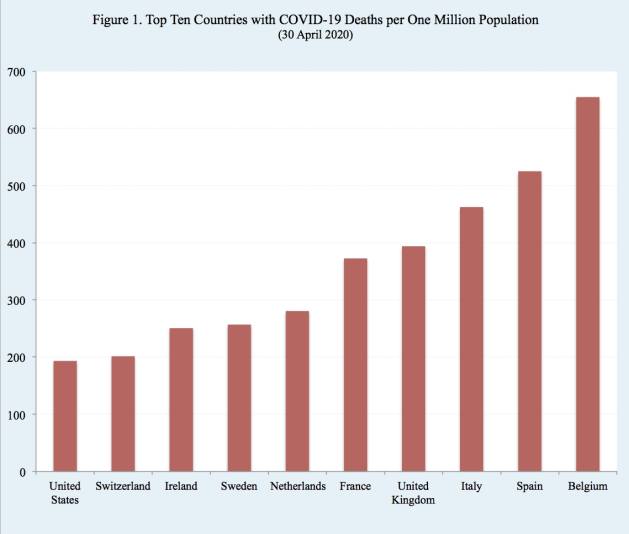 COVID-19 death rates for dense urban centers are substantially higher than national rates. New York City, one of the epicenters of the coronavirus, reported that 25 percent of its residents may have been infected by COVID-19 by the end of April – similar to the proportion in Stockholm – and the COVID-19 death rate for the New York City metro area had surpassed more than 1,000 deaths per one million population. The death toll in Wuhan has recently been raised, with the COVID-19 mortality rate now at about 350 deaths per one million population.

Some models of the pandemic’s spread assume that the disease could infect from 40 to 70 percent of the world’s population. If the COVID-19 operates similar to other viruses, some report that a high infection rate of around 60 to 70 percent would in theory lead to “herd immunity”, which happens when a sufficiently high proportion of a population become immune to an infection disease that it stops the disease from spreading. However, some have dismissed that high level of infection because it is not prevention and implies that most people would become sick with many requiring hospitalization and large numbers dying.

The majority of people who become infected with COVID-19 are expected to be asymptomatic or recover without needing special treatment. However, when elderly people, and younger adults with serious medical conditions, such as heart disease, diabetes, lung disease, asthma and obesity, get infected with the coronavirus, the available data finds them having markedly higher risks of becoming severely ill, requiring hospitalization and possibly dying from the disease.

The overall death rate from COVID-19 is estimated by some to be somewhere around 1 percent. Other estimates place the fatality rate at around 0.5 to 1 percent. In comparison, the death rate from seasonal flu is substantially smaller, typically around 0.1 percent in the United States.

Applying both more and less likely values for the infection rate and death rate of COVID-19 to the world’s population of 7.8 billion yields a broad range for the expected total number of COVID-19 deaths worldwide (Figure 2). As the world is at the early stages of this new pandemic, the selected values for this exercise are tentative and will require updating as more statistical data on the rates of infection and fatality become available. 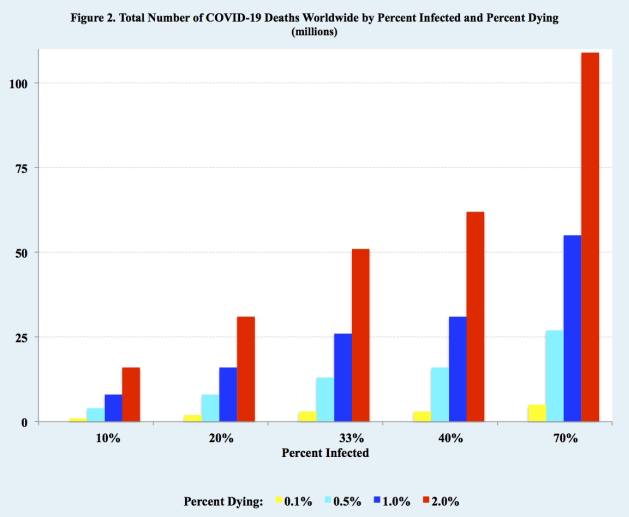 As noted earlier, some experts believe that the fatality rate from COVID-19 is likely to be ten times that of seasonal influenza, or around 1 percent. If one-third of the world’s population were to become infected with the virus, which is the infection level reported in the 1918 influenza pandemic, the resulting number of deaths from COVID-19 would be about 26 million, or 100 times as great as the official number of COVID-19 deaths at the end of April and 0.33 percent of today’s world population.

As a point of comparison, the 1918 influenza pandemic, considered the deadliest pandemic in human history, killed no less than 50 million and perhaps as many as 100 million people. Those numbers of death represent a staggering 3 and 5 percent, respectively, of the world’s population at that time.

In the absence of a vaccine and limited success in limiting the spread of COVID-19, the percent of the world’s population becoming infected could reach 70 percent, the level roughly estimated to reach herd immunity. With an infection level of 70 percent and a 1 percent fatality rate, the resulting number of deaths from COVID-19 is 55 million, or about 0.7 percent of the world’s population.

Some believe that the large reported numbers of people who died from COVID-19 may be inflated because many people would have died soon anyway as well as exaggerated for political reasons. Recently reported mortality data for 11 countries during the last month undermine that notion by finding that far more people died in those countries than in previous years. For example, the number of daily deaths is more than twice the usual number in Paris and six times the normal amount in New York City.

An analysis in Italy over the period 23 February to 21 March found that for every officially recorded COVID-19 death, there may have been another death that went unrecorded. In addition, some government agencies report that the coronavirus death toll is an underestimation as it only counts those who died after testing positive.

Given the paucity of good data and the relatively high levels of morbidity and mortality from COVID-19, unprecedented efforts are needed to slow the spread of the infection or “flatten the curve”. Without a widely available COVID-19 vaccine, populations will need to consider a variety of appropriate measures, including shelter-in-place, social-distancing, contact tracing, widespread rapid testing, self-isolation, hand washing and face mask wearing. However, as many have repeatedly cautioned, if efforts to suppress the spread of the disease are greatly relaxed or stopped too early, COVID-19 will come back and kill many more people, especially among high-risk populations, in a short amount of time.

However, some have expressed the strong concern that “the cure is worse than the disease”. In their view, the enormous economic, social and human rights consequences of closing down normal life, including businesses, schools, public places and services, travel, functions, gatherings, etc., are calamitous, long lasting and worse than the toll of the novel coronavirus.

They fear that the unemployment, hunger, impoverishment, financial indebtedness, bankruptcies, investment failings, reduced revenue, agriculture setbacks, food supply disruptions, crippled economies, widespread despair and depression brought about by the mandatory lockdown and related draconian restrictions will to lead to higher morbidity and mortality rates and more human misery than those resulting from the COVID-19 pandemic. Consequently, many are increasingly deciding to end the lockdown and to gradually return to normal daily life with limited restrictions based on area-specific risk profiles and trends in COVID-19 infection and fatality rates.

To support their decisions to end the lockdown, some have pointed to Sweden’s experience with the coronavirus. That country did not impose a rigid lockdown, but kept public life as unrestricted as possible with recommended public health guidelines, closing colleges and high schools but not lower level schools, banning gatherings of 50 or more persons, keeping restaurants and bars open and trusted the public to adopt voluntary measures to slow down the contagion’s spread.

As a result of Sweden’s coronavirus strategy, the country’s capital, Stockholm, is expected to reach herd immunity in May. Attempting to achieve herd immunity through exposure, however, has proven controversial. Sweden’s number of coronavirus deaths per million population, 256 at the end of April, is far greater than the numbers in neighboring Denmark (78), Finland (38) and Norway (39). Also, Sweden’s strategy has placed its elderly and people with existing health conditions at substantially greater risk of becoming seriously ill and, potentially, dying from the coronavirus.

By the end of April people over the age of 70 in Sweden accounted for 86 percent of that nation’s fatalities, which is roughly similar to level observed in the United States where 80 percent of the COVID-19 deaths were to those aged 65 years and over. Many of the elderly deaths occurred in nursing homes and long-term care facilities, where the disease typically spreads easily.

To effectively confront the current and future pandemics, government officials and agencies need to

In addition, responsible authorities should heed early warnings, be prepared to act quickly, aggressively and consistently, promote appropriate interventions to stem the virus’ spread and coordinate the efforts of local, state and national authorities.

Most medical and health experts have concluded that it is now almost inevitable that the COVID-19 will be transmitted globally and take a big toll on the world’s population. To effectively confront the COVID-19 pandemic, international cooperation and global efforts need to be supported, strengthened and properly funded, especially as the worst of the coronavirus still lies ahead for the world.