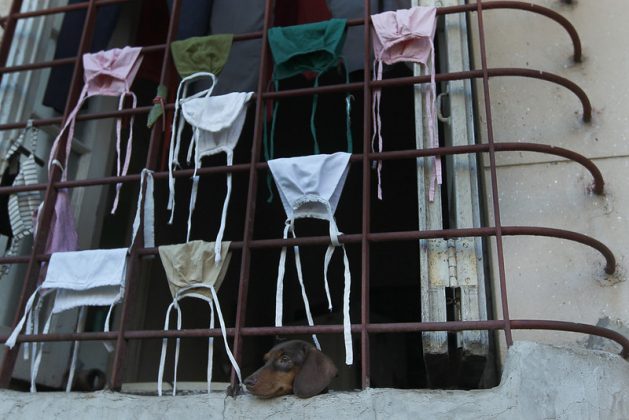 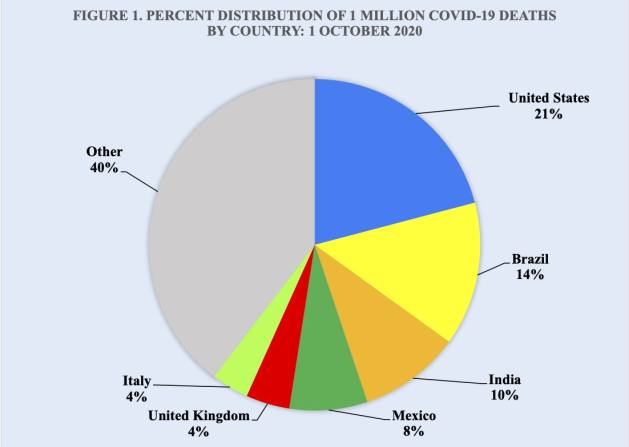 The country in second place is Brazil, which with less than 3 percent of the world’s population accounts for 14 percent of all Covid-19 deaths. Brazil is followed by India at 10 percent, Mexico at 8 percent, and the United Kingdom and Italy both at 4 percent. 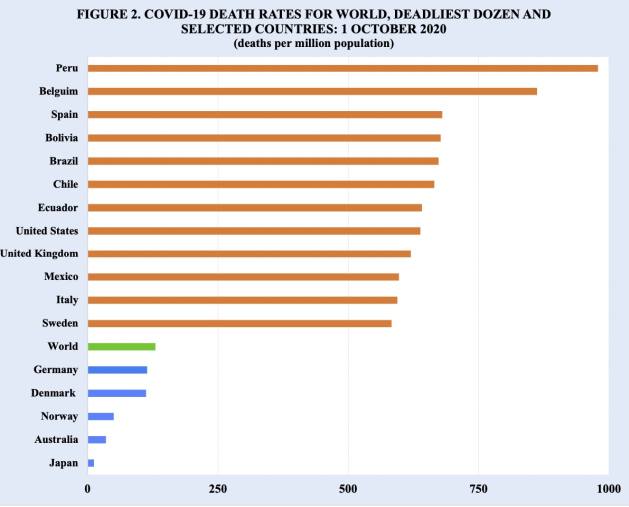 The high Covid-19 death rate of Peru is believed due in part to the country’s poor health system, which failed to conduct effective testing and contact tracing, and the fact that 70 percent of Peruvian workers are in the informal sector with most not able to afford to isolate as they are dependent on daily earnings.

In the case of Belgium, government officials say their high Covid-19 death rate is likely due to a number of factors including their exceptional way of counting unconfirmed Covid-19 deaths, the high level of elderly placed in care homes and poor initial preparations at home care centers permitting the virus to spread rapidly and have devastating effects.

Unfortunately, in many countries a combination of denial, deception and defiance stands in stark contrast to the overwhelming public health evidence concerning the dissemination of the coronavirus and lethality of Covid-19.

The interaction of the pandemic’s fallout with the growth of populism and extremism around the world hindered effective responses. In too many instances, the recommended mitigation measures became politized and openly ignored, denigrated and resisted by some groups.

Some contend that the various public health measures to limit the spread of the coronavirus, including masking wearing, social distancing and sheltering-in-place, are infringements on their liberties and freedoms and constituted unconstitutional violations of their basic rights.

However, it is widely recognized that measures and regulations intended to promote the health and safety of the general public are well within a state’s authority.

Many of the deaths in the high Covid-19 mortality countries likely would have been prevented by the early intervention and widespread use of face masks, social distancing, hand hygiene, sheltering-in-place, testing, contact tracing and related other measures.

Downplaying the threat of the pandemic, making misleading pronouncements, sending confused messages, offering unfounded reassurances, maligning health officials, delaying/resisting public health measures and deflecting blame to others contributed to the disastrous spread of the disease and subsequent rapid rise of Covid-19 deaths in many countries.

For example, if the United States response to the pandemic had been more successful and had been able to achieve the relatively low Covid-19 death rate of Germany (114 versus 638 per million population), the U.S. Covid-19 death toll would have been approximately 38,000 rather than 210,000.

Even the relatively higher Covid-19 death rate of neighboring Canada (246 deaths per million population) would have more than halved the US death toll, avoiding approximately 130,000 U.S. Covid-19 deaths (Figure 3). 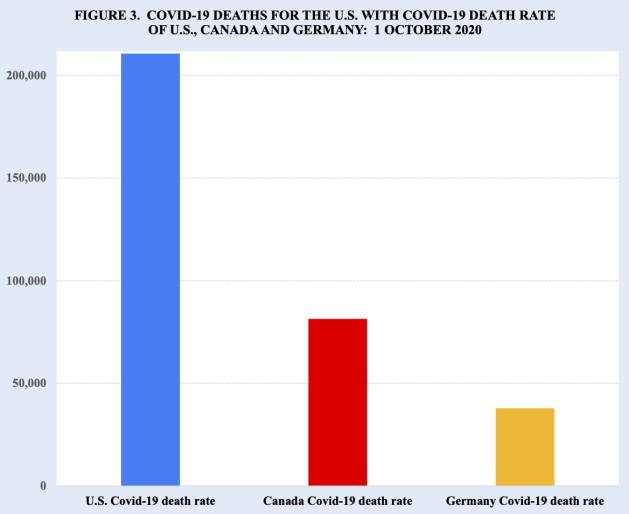 Source: Author’s estimates based on data from Worldometer.

If Sweden had been able to achieve the Covid-19 death rate of nearby Denmark, the Swedish death toll from Covid-19 would have been substantially less, about 1,100 rather than 5,900.

While in mid-April the world’s daily Covid-19 deaths peaked at around 8,500, the average daily number of deaths near the end of September was approximately 5,300. In recent weeks, however, growing numbers of countries in various regions are reporting surges in daily coronavirus cases.

In the third week of September, nearly 2 million new Covid-19 cases were reported worldwide, the highest number of reported cases in a week since the start of the pandemic.

In Europe weekly cases are now exceeding those reported when the pandemic first peaked in March. Those growing numbers of coronavirus cases point to the beginning of a second surge of Covid-19 deaths, especially for many of the countries in the northern hemisphere where approaching cold weather will drive more people indoors.

A vaccine for the coronavirus, which now has approximately three dozen candidates in human trials, is unlikely to be widely available before the expected second wave of the pandemic. If the second wave follows the path that some now fear, the current number of one million Covid-19 deaths could triple in a matter of months.

Moreover, if the world’s Covid-19 death rate were to begin to approach the current level of the United States or the United Kingdom, the million Covid-19 deaths could more than triple in the coming year.

It is widely recognized that a vaccine for the coronavirus will not be 100 percent effective. Some of the world’s largest pharmaceutical companies place the effectiveness of a hoped for vaccine at around 60 percent.  In the United States the Food and Drug Administration has indicated that any coronavirus vaccine must be at least 50 percent effective to secure approval from regulators.

Some scenarios envision the coronavirus pandemic continuing for the long haul, perhaps for at least several more years. Some fear that an approved vaccine may offer only limited seasonal protection, similar to other coronaviruses in circulation.

Also, significant numbers may decide to avoid getting inoculated while many others may simply delay their decisions fearing vaccine safety may have been seriously compromised due to political influence. In addition, the global distribution of an approved vaccine may remain limited for some time due to insufficient supplies, relatively high costs for those in low income countries and international political disputes.

Consequently, in order to check the spread of the second and subsequent waves of coronavirus infections and limit the numbers of Covid-19 deaths, public health mitigation measures, including mask wearing, social distancing, hand hygiene, sanitizing, sheltering-in-place, quarantining, testing, contact tracing and staying at home when sick, will remain the primary tools in the medical arsenal to confront the pandemic for the foreseeable future.