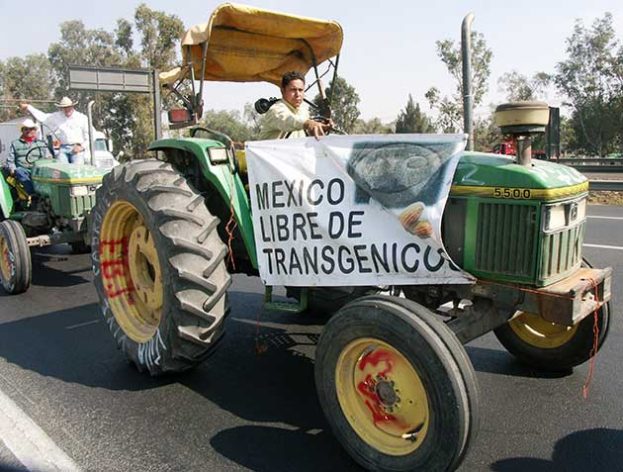 CAMBRIDGE MA, Feb 24 2021 (IPS) - Mexican president Andrés Manuel López Obrador quietly rocked the agribusiness world with his New Year’s Eve decree to phase out use of the herbicide glyphosate and the cultivation of genetically modified corn. His administration sent an even stronger aftershock two weeks later, clarifying that the government would also phase out GM corn imports in three years and the ban would include not just corn for human consumption but yellow corn destined primarily for livestock. Under NAFTA, the United States has seen a 400% increase in corn exports to Mexico, the vast majority genetically modified yellow dent corn.

In banning glyphosate, the decree cites the precautionary principle and the growing body of scientific research showing the dangers of the chemical, the active ingredient in Bayer/Monsanto’s Roundup herbicide. The government had stopped imports of glyphosate since late 2019, citing the World Health Organization’s warning that the chemical is a “probable carcinogen.”

The prohibitions on genetically modified corn, which appear toward the end of the decree, have more profound implications. The immediate ban on permits for cultivation of GM corn formalizes current restrictions, ordered by Mexican courts in 2013 when a citizen lawsuit challenged government permitting of experimental GM corn planting by Monsanto and other multinational seed companies on the grounds of the contamination threat they posed to Mexico’s rich store of native corn varieties. The import ban cites the same environmental threats but goes further, advancing the López Obrador administration’s goals of promoting greater food self-sufficiency in key crops. As the decree states:

“[W]ith the objective of achieving self-sufficiency and food sovereignty, our country must be oriented towards establishing sustainable and culturally adequate agricultural production, through the use of agroecological practices and inputs that are safe for human health, the country’s biocultural diversity and the environment, as well as congruent with the agricultural traditions of Mexico.”

Chronicle of a decree foretold

Such policies should come as no surprise. In his campaign, López Obrador committed to such measures. Unprecedented support from rural voters were critical to his landslide 2018 electoral victory, with his new Movement for National Renewal (Morena) claiming majorities in both houses of Congress.

Still, industry and U.S. government officials seemed shocked that their lobbying had failed to stop López Obrador from acting. The pressure campaign was intense, as Carey Gillam explained in a February 16 Guardian expose on efforts by Bayer/Monsanto, industry lobbyist CropLife, and U.S. government officials to deter the glyphosate ban. According to email correspondence obtained by the Center for Biological Diversity through Freedom of Information Act requests, officials in the Trump Administration’s Environmental Protection Agency, U.S. Department of Agriculture and office of the U.S. Trade Representative were in touch with Bayer representatives and warned Mexican officials that restrictions could be in violation of the revised North American Free Trade Agreement, now rebranded by the Trump Administration as the U.S. Mexico Canada Agreement (USMCA).

According to the emails, CropLife president Chris Novak last March sent a letter to Robert Lighthizer, USTR’s ambassador, arguing that Mexico’s actions would be “incompatible with Mexico’s obligations under USMCA.” In May, Lighthizer followed through, writing to Graciela Márquez Colín, Mexico’s minister of economy, warning that GMO crop and glyphosate matters threatened to undermine “the strength of our bilateral relationship.” An earlier communication argued that Mexico’s actions on glyphosate, which Mexico had ceased importing, were “without a clear scientific justification.”

Nothing could be further from the truth, according to Victor Suárez, Mexico’s Undersecretary of Agriculture for Food and Competitiveness. “There is rigorous scientific evidence of the toxicity of this herbicide,” he told me, citing the WHO findings and an extensive literature review carried out by Mexico’s biosafety commission Cibiogem.

And even though most imported U.S. corn is used for animal feed, not direct human consumption, a study carried out by María Elena Álvarez-Buylla, now head of CONACYT, the government’s leading scientific body, documented the presence of GM corn sequences in many of Mexico’s most common foods. Some 90% of tortillas and 82% of other common corn-based foods contained GM corn. Mexico needs to be especially cautious, according to Suárez, because corn is so widely consumed, with Mexicans on average eating one pound of corn a day, one of the highest consumption levels in the world.

While the glyphosate restrictions are based on concerns about human health and the environment, the phaseout of GM corn is justified additionally on the basis of the threat of contamination of Mexico’s native corn varieties and the traditional intercropped milpa. The final article in the decree states the purpose is to contribute “to food security and sovereignty” and to offer “a special measure of protection to native corn.”

The ban on GM corn cultivation has been a longstanding demand ever since the previous administration of Enrique Peña Nieto granted permission to Monsanto, DuPont, Syngenta and a host of other multinational seed companies to begin experimental planting in northern Mexico. Such permits were halted in 2013 by a Mexico court injunction based on a claim from 53 farmer, consumer and environmental organizations – the self-denominated Demanda Colectiva – that GM corn cultivation threatened to contaminate native varieties of corn through inadvertent cross-pollination.

“It is difficult to imagine a worse place to grow GM corn than Mexico,” said Adelita San Vicente, the lead spokesperson for the plaintiffs who is now working in López Obrador’s environment ministry, when I interviewed her in 2014 for my book, Eating Tomorrow (which includes a chapter on the GM corn issue). Such contamination was well-documented and the courts issued the injunction citing the potential for permanent damage to the environment.

As Judge Walter Arrellano Hobelsberger wrote in a 2014 decision, “The use and enjoyment of biodiversity is the right of present and future generations.”

Mexico’s farmer and environmental organizations were quick to praise the decree, though many warned that it is only a first step and implementation will be key. “These are important steps in moving toward ecological production that preserves biodiversity and agrobiodiversity forged by small-scale farmers over millennia,” wrote Greenpeace Mexico and the coalition “Without Corn There is No Country.”

Malin Jonsson of Semillas de Vida (Seeds of Life), one of the plaintiffs in the court case, told me, “This is a first step toward eliminating glyphosate, withdrawing permits for GM maize cultivation and eliminating the consumption of GM maize. To end consumption we have to stop importing GM maize from the United States by increasing Mexico’s maize production.”

Mexico imports about 30% of its corn each year, overwhelmingly from the United States. Almost all of that is yellow corn for animal feed and industrial uses. López Obrador’s commitment to reducing and, by 2024, eliminating such imports reflects his administration’s plan to ramp up Mexican production as part of the campaign to increase self-sufficiency in corn and other key food crops – wheat, rice, beans, and dairy. Mexican farmers have long complained that since NAFTA was enacted in 1994 ultra-cheap U.S. corn has driven down prices for Mexican farmers. The proposed import restrictions would help López Obrador’s “Mexico First” agricultural policies while bringing needed development to rural areas.

Industry organizations on both sides of the border have complained bitterly about the proposed bans. “The import of genetically modified grain from the U.S. is essential for many products in the agrifood chain,” said Laura Tamayo, spokeswoman for Mexico’s National Farm Council (CNA), who is also a regional corporate director for Bayer. Bayer’s agrochemical unit Monsanto makes weedkiller Roundup and the GMO corn designed to be used with the pesticide.

Juan Cortina, president of CNA, said his members might sue the government over the bans. “I think there will need to be legal challenges brought by all the people who use glyphosate and genetically-modified corn,” he told Reuters, adding that he also expects U.S. exporters to appeal to provisions of the USMCA trade pact to have the measures declared illegal.

Industry sources also warned that Mexico would never be able to meet its corn needs without U.S. exports and that U.S. farmers would be harmed by the presumed loss of the Mexican export market. Others quickly pointed out that Mexico was not banning U.S. exports, just GM corn exports. U.S. farmers are perfectly capable of producing non-GM corn at comparable prices, according to seed industry sources, so the ruling could encourage the development of a premium market in the United States for non-GMO corn, something U.S. consumers have been demanding for years.

Such pressures may present an early test for President Joe Biden and his nominee for U.S. Trade Representative, Katherine Tai, whose confirmation hearing is scheduled for February 25. Tai won high marks for helping get stricter labor and environmental provisions into the agreement that replaced NAFTA. Will she and the Biden administration respect Mexico’s sovereign right to enact policies designed to protect the Mexican public and the environment while promoting Mexican rural development?

Victor Suárez certainly hopes so. “Our rationale is based on the precautionary principle in the face of environmental risks as well as the right of the Mexican government to take action in favor of the public good, in important areas such as public health and the environment,” he told me.

“We are a sovereign nation with a democratic government,” he continued, “which came to power with the support of the majority of citizens, one that places compliance with our constitution and respect for human rights above all private interests.”

Timothy A. Wise is a senior advisor with the Institute for Agriculture and Trade Policy and the author of Eating Tomorrow: Agribusiness, Family Farmers, and the Battle for the Future of Food.