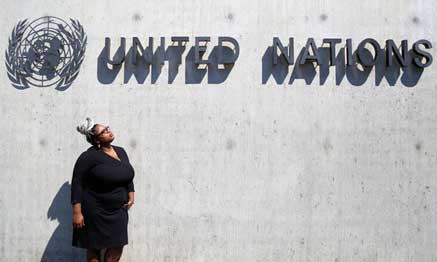 NEW YORK, Mar 2 2021 (IPS) - When the United Nations was founded in 1945, the principle of equality for all – regardless of sex, race, language, or religion – was enshrined in the organization’s Charter.

More than seventy-five years have passed, and during the intervening decades, the UN has played a leading role in advancing gender equality around the world. But there is one significant way in which the UN, through the General Assembly of member states and the Security Council, has failed to live up to its stated ambition, and that is in the selection of its own leader.

To date, there have been nine UN Secretary-Generals. Not one of them has been a woman.

I work at Equality Now, a global women’s rights organization that has been at the forefront of campaigning for a woman Secretary-General since 1996. Twenty-five years ago, there were numerous suitably qualified women who could have fulfilled the role commendably, but none were selected.

And up until the most recent election, hardly any women were even nominated.

In recent years, sentiment that the appointment of a female leader is overdue has swelled and become mainstream. In the 2016 campaign to choose the current head, seven of the final thirteen candidates were women – unprecedented in the UN’s history.

Thanks to successful advocacy by the civil society coalition 1 for 7 Billion and others, a new, more transparent selection process was introduced, including live televised conversations with the candidates.

Alongside this was the “Campaign to Elect a Woman Secretary-General” (WomanSG campaign) as well as a Group of Friends initiative led by Colombia, which also championed the appointment of a woman.

Although it was abundantly clear how eminently qualified the women contenders were, and despite their impressive resumes and breadth of appeal and experience, once again it was a man who was chosen for the top job.

When António Guterres was selected as the incoming Secretary-General, feminists within and outside the UN developed a series of action points for him to advance gender equality within the organization.

This included the need to increase gender parity across UN institutions; provide adequate financing to achieve gender equality within the UN; and strengthen UN Women. The importance of working with women’s rights organizations and holding member states accountable to commitments to achieve gender equality was also highlighted. Encompassing all this was the call to lead by example.

Advances and shortcomings under Guterres’ leadership

During Guterres’ time in office, the International Center for Research on Women (ICRW) has been grading his performance in feminist leadership. Their fourth and latest report gives him a “B” and applauds the great strides made in reaching gender parity within the UN’s senior management under his tenure.

However, a neglected concern highlighted in the ICRW report as requiring urgent addressing is sexual harassment and abuse within the UN work environment.

The issues of lack of independence and the accountability gap – acknowledged by even the UN internal justice system itself – cannot remain side-lined if the Secretary-General’s “zero-tolerance policy” on sexual harassment is to be achieved. Member states should support this work as part of their commitment to ending violence against women.

Such commitments must extend to cyberspace. Online sexual abuse, exploitation and harassment have grown exponentially since the onset of the pandemic and there is no reason to think the UN virtual workplace is immune.

Rule of law must be applied in the digital sphere, with protective and preventive measures enacted and enforced to eliminate all forms of violence against women and girls, including online sexual exploitation and abuse.

UN agencies, governments, big tech, and civil society should work together to develop and adopt international standards that will provide a guiding framework for international cooperation. Incorporated within this is the enactment of laws at a national level that address the gendered and multi-jurisdictional nature of gender-based cybercrime.

Positive law reform at the national level must be encouraged and invested in by and through the UN. Member States that fail to live up to their obligations should be held to account.

Governments must protect women’s and girls’ rights in all spaces and relationships, public or private, to tackle their unequal status. This includes amending or repealing gender discriminatory family laws that underpin economic disadvantage, exploitation and violence, preventing women and girls from participating wholly in society and reaching their full potential.

The Global Campaign for Equality in Family Law, launched by Equality Now and partners in March 2020, aims specifically at the reform of sex discriminatory family laws, one of the biggest obstacles to achieving gender equality.

The UN must actively encourage Member States to repeal or amend all discriminatory laws, implement progressive legal and policy frameworks, and adopt and enforce constitutional provisions that guarantee equality without exception.

A positive demonstration of this can be found in Sweden’s feminist foreign policy action plan for 2021.

Over the past decade, impressive gains have been achieved in progressing women’s leadership. A growing number of women are being elected to political office, with various women heads of state receiving praise for their effective handling of the pandemic.

Recently, high profile glass ceilings were shattered with the election of Vice-President Kamala Harris in the USA, and the appointment of Ngozi Okonjo-Iweala as Director General of the World Trade Organisation.

It is time for the UN to follow suit by appointing a woman to its highest position. Focusing now on the selection of the next UN Secretary-General is timely considering the priority theme of the 2021 UN Commission on the Status of Women (CSW65) is: “Women’s full and effective participation and decision-making in public life, as well as the elimination of violence, for achieving gender equality and the empowerment of all women and girls.”

In addition, the Generation Equality Forum will be launching an Action Coalition on Feminist Movements and Leadership.

Member states should do all they can to live up to commitments made over a quarter of a century ago in the Beijing Platform for Action – to nominate women for senior leadership posts who will promote gender equality, including within the UN itself.

Representation matters at the global level too. Now more than ever, the world would benefit from having a feminist woman as UN Secretary-General, governing at the helm of the most important international body we have.

In numerous countries, COVID-19 has weakened social protection systems and pushed many women and girls into extreme poverty, further widening the pre-existing gender poverty gap. Concerning reports of increases in child marriage, girls dropping out of school, and domestic violence are just a few examples of how women and girls are being adversely impacted by the pandemic.

The UN must continue to champion gender equality as integral to COVID-19 recovery plans and challenge regressive forces attacking women’s rights. This requires member states further strengthening international efforts to empower women economically and socially, directing financial support to boost women’s rights movements, and ensuring feminists from the grassroots through to the highest levels of governance are equal participants in policy-making and implementation.

It seems that the President of the General Assembly is starting the process of selecting the next General-Secretary in the right direction. It is now up to individual UN Member States to nominate strong women candidates, as they were encouraged to do the last time and which was enshrined in a 2015 resolution.

With continued transparency and input from civil society helping to curtail opportunities for old-boy network backroom deals, a woman Secretary-General is much more likely to be selected.

While Guterres has said he is available to continue for a second and final five year term, he must participate fully in the upcoming selection process as if his re-appointment was not a foregone conclusion (as has been the case in past re-elections).

Furthermore, as a self-proclaimed “proud feminist” he should do all he can to pave the way for women to be nominated and selected by member states when he does hand over the reins. To a feminist woman.

The author is Global Lead on Legal Equality and Access to Justice at Equality Now*.

*Equality Now is an international human rights organization that works to protect and promote the rights of women and girls around the world by combining grassroots activism with international, regional and national legal advocacy. Its international network of lawyers, activists, and supporters achieve legal and systemic change by holding governments responsible for enacting and enforcing laws and policies that end legal inequality, sex trafficking and exploitation, sexual violence, and harmful practices such as female genital mutilation and child marriage.