The writer is a researcher with CIVICUS, the global civil society alliance based in Johannesburg JOHANNESBURG, South Africa, Apr 29 2021 (IPS) - Access to accurate information is vitally important during the pandemic, so that people can understand how to protect themselves and their families, and to hold their governments to account for their response to the health emergency.

But it is clear that many governments are instead working to hamper the flow of information. Many governments have used the pandemic as a pretext to crack down on the ability of journalists to do their jobs.

While there is an understandable need to limit the spread of false information about the virus, claims of ‘fake news’ are often being used as a smokescreen to imprison journalists and censor independent media organisations critical of governments. Some worrying trends have been in Africa.

Just like the virus, the persecution of the press has no borders, affecting journalists in many countries across the region. In its latest global report, the CIVICUS Monitor, an online platform that tracks civic freedoms, documented that journalists had been detained in at least 28 African countries. This was the top civic rights violation recorded in Africa during the past year.

From Chad to Nigeria and from Somalia to Zimbabwe, journalists have been arrested for their reporting on COVID-19. In Zimbabwe, investigative journalist Hopewell Chin’ono has been arrested three times since July 2020.

The persecution began after he published an exposé alleging corruption in the Health Ministry’s US$60 million procurement of protective equipment. Hopewell was targeted even though his reporting led to the sacking and arrest of the Health Minister.

He was rearrested in November on spurious charges of inciting anti-government protests and then again in January for a tweet alleging police brutality in lockdown enforcement. He is currently out on bail, but faces up to 20 years in jail if convicted of ‘peddling falsehoods’. Other Zimbabwean journalists have also been arrested for their reporting on the pandemic. 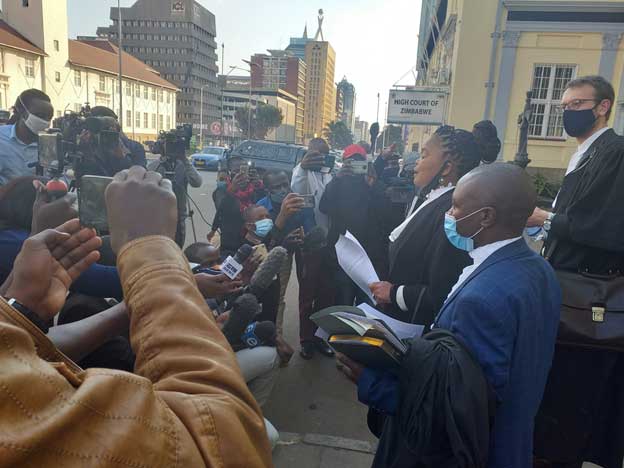 Hopewell Chin’ono’s lead lawyer Beatrice Mtetwa tells journalists outside the High Court that she is disappointed by the court’s decision to dismiss her client’s bail appeal. Credit: Zimbabwe Lawyers for Human Rights

Media outlets have been shut down, in another common tactic used to silence government critics and suppress critical reporting on state responses to the pandemic.

In Tanzania, where media outlets were regularly taken off-air or fined for not toeing the government line under the late President Maghufuli’s regime, the Communication Regulatory Authority suspended multiple outlets for their pandemic coverage, including for publishing death tolls. Tanzania’s official policy of pandemic denial under the late Magufuli saw the official counting of cases cease in the early days of the health crisis.

A similar trend was documented in Zambia, where the authorities have used COVID-19 as an opportunity to cancel the broadcast licence of the popular TV station, Prime TV, which was known for its critical coverage of the government. In April 2020, after the independent outlet’s coverage of the pandemic, the broadcast regulator cancelled the licence on public safety grounds and police prevented staff from leaving the building. The same station was suspended a year earlier for its coverage of parliamentary elections.

Instead of the repression, journalists should be recognised as key allies in debunking lethal disinformation. To make sure people are getting up-to-date, safe and relevant information about COVID-19, governments, independent media and civil society must work together to clearly define what qualifies as ‘fake news’.

Most importantly, to fight disinformation, governments must be more transparent and proactively disclose timely data on the state of the health emergency in their countries. The media must be able to access and interrogate such information.

On World Press Freedom Day, and over a year since the World Health Organization declared COVID-19 a global pandemic, it is critical that independent media are able to operate freely, without fear of reprisals or detention.

Journalists are part of the solution to controlling the virus and combating disinformation. They should not be behind bars for doing their job.