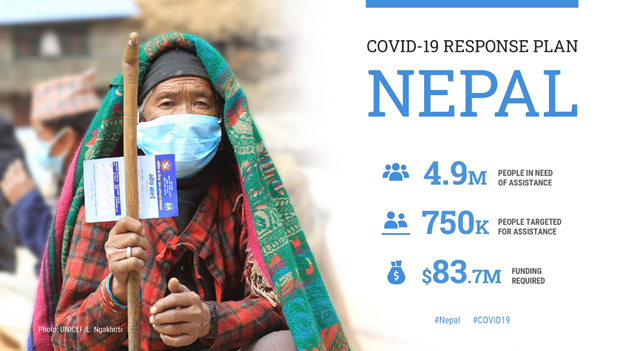 As Nepal faces breaking point amidst its worst COVID-19 outbreak, the United Nations and its partners launched in May 2021 the Nepal Covid-19 Response Plan calling for US$ 83.7 million to mobilize an emergency response over the next three months to assist 750,000 of the most vulnerable people affected by the pandemic. The plan was endorsed by the Nepal Humanitarian Country Team and the Government of Nepal’s COVID-19 Crisis Management Centre and lays out critical areas of support required to complement the Government of Nepal’s response efforts. Credit: World Health Organization (WHO)

KATHMANDU, Nepal, Jul 23 2021 (IPS) - Following the Supreme Court’s decision to reinstall the House of Representatives and appoint– after a prolonged and nasty legal battle– a new Prime Minister, Sher Bahadur Deuba, there is high probability that a government of national unity will be put together in Nepal.

After months of uncertainty and utter disregard of the rule of law by former Prime Minister Sharma Oli, whose attempts to remain in power at any costs has severely impacted the country’s response to a more lethal 2nd wave of Covid 19, the new government has the work cut out.

Not only it needs to do whatever it takes to avoid another and much more brutal outbreak but also it must take the responsibility to reboot the entire health system before the next general election.

Though predictability and certainty are not yet common features of this still young democracy that just few years ago undertook an ambitious path towards federalism, if everything will go smooth, the country will still have to wait one and half year before the next vote.

It is enough time for an experienced though not necessarily effective politician like Deuba that he is embarking on his 5th and possibly last term as Prime Minister, to be ambitious and lay the foundations for the establishment of real national public health system.

Certainly, it is going to be a daunting task especially in a country in which the private sector was enable, in the past two decades, to take advantage and exploit a weak regulatory system to its own advantages.

During the 2nd wave there have been multiple cases of private hospitals extracting exorbitant fees from family members of patients affected by Covid.

No matter several tokenistic attempts at regulating the health care costs during the crisis and far from a real crack down of such practices, it wasn’t unsurprising that the Ministry of Health and Population’s perception of a toothless institution was greatly magnified during this second wave.

It did not help that the first doses of vaccines sent by India months ago were distributed with too loose criteria or with no criteria at all.

For example, banks’ workers and many other representatives of the private industries, including those in the tourism sector, the latter mostly unemployed since the first outbreak last year, were included in the list of essential workers deemed as priority.

I am wondering why not then ensuring in such list also streets vendors or small shop keepers from whom the vast majority of Nepalis still buy their daily groceries or why not simply prioritizing only the elders, many of which had to wait for months and months before receiving the 2nd dose?

It is clear that despite certain proven level of expertise, the Ministry of Health and Population could not prevail in the tough process of decision-making regarding vaccine distribution that was centralized by Oli and his advisors, with their quest of power at any costs and with any means topping any public health’s concerns.

Poor governance and disregard of constitution so predominant with the Oli’s administration costed the lives of thousands of people. Deuba does not need to start from scratch.

First of all, while this scriber is writing, it is certainly positive that the new Prime Minister is inaugurating a new vaccination program.

Provided that several pledges of new vaccines will materialize into real inoculations on the ground in few weeks from now, listening to the experts and ensure that scientific evidence prevails over politicking, will be essential.

The scary truth is that, with every aspect of the lockdown being lifted, the second wave did not really die off yet and it soon could metastasize in a much more dangerous contagion.

The infections are increasing day by day and as per yesterday only in the Kathmandu Valley there were almost 500 cases a day, a figure that might be indicative of a worse scenario soon to come. Getting this right and finally prioritize this emergency is going to be essential.

This means finding an agreement, albeit a temporary one, with the private hospitals that must adhere to common national standards in the provision of Covid 19 related care.

The urgency to avoid a third wave might bring some common sense among the private operators that must drastically reduce the cost of their services for all those Covid patients.

Such agreement could become a template for future and much tougher negotiations that would lead to the establishment of a truly cooperative approach where private operators should become an essential though complementary pillar of a national health system.

Similarly, to what happened for the Covid 19, existing regulations on whatever is legit to be charged on the public for any type of health service is not only scarcely regulated but even less enforced.

Linked to this issue is that any new budget provisions should drastically scale up the national health insurance program that has been implemented so far only through a too timid phase in manner that created a spotty map of the places where such service is accessible.

Ask any citizens of the country and there will be high probability that they never ever heard of such provision.

The insurance not only needs to be accessible everywhere in an easy and predictable fashion but also the max coverage allowed should be increased.

This is not barely enough to cover the real expenses of any major operation even in public hospitals which keep charging the public even if they are much more accessible (or just simply less costly) than their private counterparts.

The legal framework is centered on the Health Insurance Act that was approved in 2017 but what is needed is not only a big push towards its implementation.

There is also a need of an amendment for making it on the one hand more inclusive and on the other, mandatory rather than just voluntary in nature like per the current provisions.

Last but not the least, Oli, in one of his “grandeur” decisions, had declared the creation of 396 new public hospitals.

In the budget that was presented by his former Finance Minister just at the end of May, whose destiny is now totally uncertain with a new government in place, there were provisions for this herculean program whose implementation, provided that the resources will be available, risks to be marred by corruption and rent seeking.

Realizing these hospitals, in cooperation and partnership with the provinces and municipalities who are in charge now of public health, would truly provide a big breakthrough to enable the creation of a real national public health system.

Certainly, Deuba and the coalition of parties that will prop him up in the months ahead, including his Nepal Congress, are much keener than Oli towards the implementation of a truly federal state, a very complex undertaking that would never work out without the full support of parties in power in Kathmandu.

With so much at stake, Deuba would better ensure his legacy by effectively starving off a third Covid 19 wave and by building the columns of a more equitable, just public health system in Nepal.

The Author, is the Co-Founder of ENGAGE, a not-for-profit NGO in Nepal. He writes on volunteerism, social inclusion, youth development and regional integration as an engine to improve people’s lives.