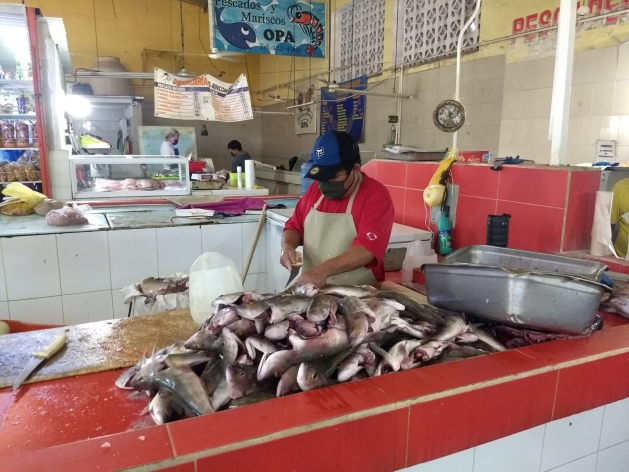 The city of La Paz, capital of the state of Baja California Sur, in northwestern Mexico, is one of epicenters for shark capture. Its products are destined for local markets, such as Nicolás Bravo's, where a vendor cleans fish caught that same day, in July 2021. Credit: Emilio Godoy / EJN-IPS

LA PAZ, Mexico, Aug 26 2021 (IPS) - At “The Lieutenant” (“El Teniente”) fishing site, near La Paz (Baja California Sur’s capital) the boats go by and come in all morning. To chase down sharks, fishers make their way to the Holy Spirit island, some 30 km away from La Paz. They unload the products that will be sold at the city’s fish markets.

Since at least 2016, Mexico has become a strong seller of shark fins to China and Hong Kong, under the Convention on International Trade in Endangered Species of Wild Fauna and Flora (CITES) mechanisms. In the Asian market, shark fins are prized, used to make fin soup and other delicacies.

A fisher in Mexico gets around $2 per kilogram of shark, but the dried fins can cost up to $70 in Hong Kong, according to news and scientific reports. Data from the National Chamber of Fishing and Aquaculture Industries (Canainpesca) indicates that the fin trade alone represents 8-12% of producers’ income.

But the country’s export data and records from CITES, when compared, reveal discrepancies that seed doubt about whether the shark fins indeed originate in Mexico.

The Secretary of Environment didn’t authorize shark fin exports to China in 2020, but the country’s trade statistics show the delivery of 6,407 kg to the Asian nation that year. The exports need a special approval to comply with CITES requirements.

Those numbers show a growing increase of shark fin exports to China and Hong Kong, errors in Hong Kong’s and Mexico’s records, and the probability of illicit fins passing through legitimate trade channels to Asian markets.

Illicit fishing refers to activities such as fishing without a permit, out of closed season, capture of protected species, the use of forbidden fishing gear or giving false information on volumes and captured animals.

For Alejandro Olivera, Center for Biological Diversity (CBD)’s representative in Mexico, the lack of statistical reliability suggests under-reporting. “It’s hard to prove corruption, but it implies that things aren’t being done well, and we are talking about an international body. There should be a better mechanism at CITES, because they rely too much on what the countries report. Every single year there is a debate about it, but a better agreement for certainty and traceability (of the data) hasn’t been reached yet,” he said to EJN.

A 2018 lawsuit filed by environmentalists against the National Commission for the Knowledge and Use of Biodiversity’s (Conabio) International Cooperation and Implementation Direction, seen by EJN, accused that agency of issuing non-detriment finding certificates (NDF), used to evaluate export requests of species protected by CITES, without complying with the international requirements.

The complaint, still pending, states that the authorizations lacked estimates of shark stocks, mortality patterns, population trends and extractions by species, among other aspects. It accuses Conabio of approving the delivery of 1,307.23 kg of hammerhead, smooth hammerhead and great hammerhead shark dried fins through 35 NDF in 2015.

Cantú, a biologist by training, explained that the volume of fins doesn’t match that of the caught sharks. “It means the fishing authorities that manage notice of arrivals don’t do their job. The international rules aren’t fulfilled,” said.

The Fishing and Aquaculture National Commission (Conapesca), the fishing authority, allows it. Conapesca did not respond to repeated requests for an interview. 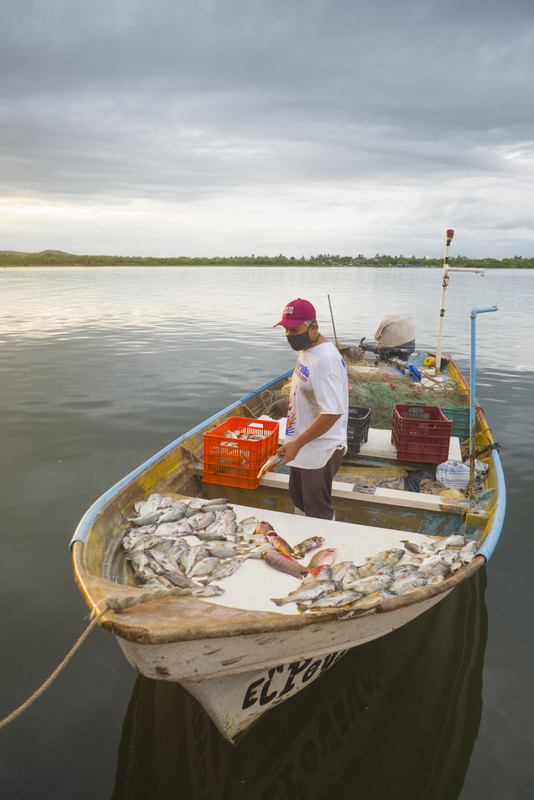 In Mexico, the North Pacific coasts are important shark catch areas. In the image, a fisherman reviews his morning catch in Mazatlán, in the northwestern state of Sinaloa, in August 2021. Credit: Christian Lizarraga / EJN-IPS

Hammerhead sharks give birth yearly or biannually. This slow-growing species reaches maturity at around eight or nine years. In the wild, they can live between 20-30 years, but one serious threat for populations is that they’re captured when they’re young, before they have a chance to breed.

The 2020 technical report “Selection of species for inclusion in the review of significant trade following COP 18: Extended analysis”, by the UN Environment Programme World Conservation Monitoring Centre, found a sharp increase in international trade of hammerhead shark fins, of which Mexico contributes 61% of the global supply.

For the great hammerhead shark, it discovered that Mexico provides 71%. As for the silky shark, the country supplies 2% of the foreign market, and the pelagic thresher, approximately12%. For smooth hammerhead shark dried fins, Mexico supplies 76%.

“We’re among the countries that better document shark fishing. It’s about how we use the best information to agree with the fishing authorities on the volumes of exploitation. The threat of illegal trade is always there but it’s a matter of law enforcement. It’s hard to know its magnitude. The Asian market is pretty irregular, it’s a real vacuum,” he said.

Beginning in 2020, Conabio, which financially depends on the Secretary of the Environment (Semarnat), established volumes of sustainable exports to monitor shark fishing and fin exports. Towards that end, the agency created a coding system, in which green means sustainable use, yellow comes on when the exploitation levels reach 70% and red means a stop for export licenses. This presages a conflict with the fishing sector.

Benítez explained the hammerhead shark has some margin for capture (coded green), the smooth hammerhead and the great hammerhead sharks are near-yellow in the Pacific Ocean, while the silky shark and pelagic thresher are both approaching red.

Conabio is about to publish a book on Mexican sharks included in CITES. Moreover, it will take part in the organization of a global meeting on non-detriment finding certificates (NDF), used to evaluate export requests of species protected by CITES, presumably in 2022.

In its 2018 report “Unintentional partner: How the United States helps the illegal shark fin market”, the Natural Resources Defense Council (NRDC), which advocates for protection of wildlife and the environment, discovered that the US has become a bridge for shark fin exports from at least 10 American countries, Mexico among them.

NRDC identified dozens of in-transit shipments from these countries, principally to Asia, and the majority to Hong Kong. Mexico was the origin of more than a third of the cargo that mainly passed through the Los Angeles and Long Beach ports in California and Honolulu in Hawaii. Due to the different kinds of protection that countries like Costa Rica, Mexico and Peru apply regarding sharks, the organization doubted the legality of those fins.

According to Rosario Álvarez, the scientific network on migratory marine species Migramar’s executive director, shark populations decrease “in an alarming way”, for being considered commercial species, as “if they were chickens”.

Even though there aren’t population assessments for scalloped hammerhead sharks in the northeastern Pacific, Conabio has found reports of a 80% decrease in the last 70 years in adjacent regions. Pelagios Kakunjá, a non-profit organization in Mexico focused on ocean conservation, estimates that it’s overexploited. For smooth hammerhead sharks, there are no population assessments, but Conabio says that they have suffered a lower reduction compared to other hammerhead taxon, whereas Pelagios has found they’re overexploited.

In the case of great hammerhead sharks, there aren’t population assessments, but Conabio has found reports of a 80% decrease in the last 70 years near the northeastern Pacific, and Pelagios estimates they’re overexploited.

“The illegal fin trade passes through Mexico. There is evidence that there’s trade out of the law. There is a lack of an adequate legal framework and of social and environmental regards. We seem to be racing at very different speeds: the speed of extraction exceeds the speed of reaction,” Álvarez said.

The data discrepancy has already reached CITES, which in its thirty-first virtual meeting of the Animals Committee this past May and June, suggested inviting the body’s Steering Committee to review the results of the Convention Secretariat’s study on the apparent difference in the trade of shark products, especially that of the notices of arrival to ports.

However, the Food and Agriculture Organization’s 2021 technical report “CITES and the sea. Trade in commercially exploited CITES-listed marine species” praised Mexico’s “relative success” in reporting trade of hammerhead sharks, “possibly due to the coastal and artisanal nature of fisheries.”

Law enforcement is Mexico’s pending issue, but in its 2018-2020 report to CITES, the country excluded information on law enforcement regarding violations to the treaty and since 2017 the country hasn’t delivered reports on annual illegal trade.

The 2017 “Action plan for North America. Sustainable trade in sharks”, developed by the Commission for Environmental Cooperation –agency of the Mexico-United States-Canada Treaty–, focused on fostering the legal, sustainable and traceable of eight shark species includes policies such as expanding the collection and analysis of shark fisheries and trade data, update shark fisheries management in Mexico, and building enforcement capacity.

Yet, the available evidence shows that Mexico still suffers from delays in those areas.

Defender’s Cantú pointed out that Mexico was always a strong exporter, but “before there was no information and that’s why the species were included in CITES”.

The expert emphasized that any regulation, perfect as it may be, “works provided that the authority applies them. Otherwise, [without enforcement] nothing works. Budget and trained personnel are needed. We have a (fishing) authority who doesn’t want to do its job, another one that more or less wants to do it, but lacks budget and human resources. And a higher authority (the government) that doesn’t care about the environment.”

NRDC suggests that the Latin American countries that contribute substantially to the shark international trade should prioritize domestic law enforcement and international conventions that govern fishing and shark trade, especially the fulfillment of CITES requirements.

Álvarez thinks the solution is categorical: forbidding shark fishing, as Colombia decided in 2020.

“That might discourage the market. There’s an important part of the demand side, as the purchasing level grows in Asia, in addition to the lack of regulation. It’s an unsustainable activity. We saw it before with the turtle and whales in the ’80s”, she commented. (Turtles and whales species were massively hunted, until they got protection from CITES. But turtles are still under threat from illegal fishing and trafficking.)

The conclusions of two workshops on NDF development organized by Conabio in 2019 and 2020 highlighted the importance of the assessment of stocks to measure the level of damage in fishing and of the generation of more information about the use of fishing gears, mortality per captures and the scale of the illegal fishing.

Meanwhile, Benítez, from Conabio, insisted on the importance of staying away from the sustainable limits.

“I’d expect that the export wouldn’t grow that much, for the sake of the species. We have to manage better to have sustainable management for the long term. It shouldn’t be a goal — it is about limits. We’re not interested in maximum exploitation, or in causing a social problem, but we do want to make it clear that we must have limits,” said Benítez.

This story was produced with support from the Internews’ Earth Journalism Network.