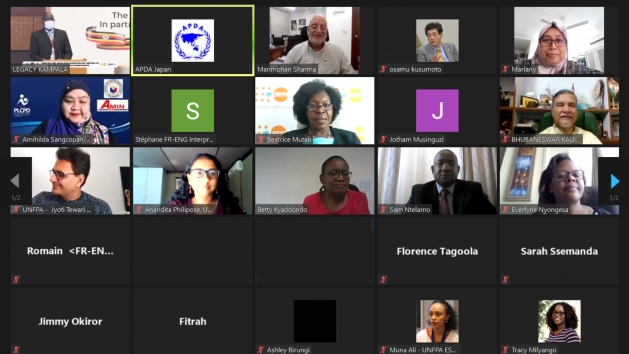 Delegates from Asia and Africa met during a two-day conference to discuss ICPD25 programme of action. Credit: APDA

Ugandan MP Kabahenda Flavia dramatically told the conference that women parliamentarians in her country “stampeded the budget process” to ensure there was potential to recruit midwives and nurses at health centres. Another told of a breastfeeding lawmaker who brought her child to parliament, forcing it to create inclusive facilities for new mothers.

In his opening remarks, former Prime Minister of Japan and chair of the APDA, Yasuo Fukuda, commented that the pandemic had “dramatically changed the world. It has exposed enormous challenges faced by African and Asian countries, which lack sufficient infrastructure in health and medical services.”

With only nine years until 2030 to achieve the Sustainable Development Goals (SDGs)
Fukuda told parliamentarians they needed to respond to the swift pace of global change.

His sentiments were echoed by Cameroon MP Marie Rose Nguini Effa, who said in Africa, the pandemic had “affected the lives of many people, including the aged, youth and women. Many young people lost their jobs while girls’ and young women’s access to integrated sexual and reproductive health information, education and services have plunged.”

“It has shone a spotlight on our health systems and personnel in ways that have rarely happened before. Evidence and data show that gender-based violence, teenage pregnancies and FGM(female genital mutilation) have risen dramatically in the COVID-19 contexts,” she continued. “We have seen the importance of keeping sexual and reproductive health and rights on the agenda to ensure that we reach the most vulnerable with information and services, even in the midst of the global pandemic.”

Addressing how parliamentarians can make a difference, Pakistani MP Romina Khurshid Alam intimated legislation was not the only route.

Other actions were needed to achieve SDGs, especially those relating to women. For example, the act of paying women the same as their male counterparts would more than compensate for the estimated $264 billion costs over ten years of achieving SDG 5 on gender equality.

Alam, who is also the chair of the Commonwealth Women Parliamentarians forum, quoted figures from the World Economic Forum, which had looked at the benefits of pay equity. Each year the discrimination “takes $16 trillion off the table”.

“If we just started paying women the same amount of money that we pay men for the same job. Your country will generate that GDP. We will not have to beg anyone for that money,” she said.

The ‘shadow pandemic’ also threatens to destroy any progress made on agenda 2030, Alam said.
People were put into lockdown to prevent the spread of the disease – but not all people live in three-bedroom houses. Overcrowding in poor areas, the stress of lockdowns led to a 300 percent increase in violence.

Flavia said in Uganda, women’s issues were taken extremely seriously – their role, she said, should not be underestimated.

“Women don’t only give birth. They are the backbone of most economies,” she noted, adding that more than 80 percent of the informal sector is made up of women. She listed various laws created to ensure women are accorded full and equal dignity, including article 33 of the Ugandan constitution, which enshrined this.

Women parliamentarians saw their role as custodians of the ICPD 25 programme as action – and were prepared to act if their demands were not taken seriously, including holding up the budgeting process until critical health posts were funded.

Constatino Kanyasu, an MP from Tanzania, called for collective action.

“Developing countries should merge those efforts with other issues, by addressing Covid-19 together with ICPD+25 commitments horizontally,” she said.

In a presentation shared at the conference, Jyoti Tewari, UNFPA for East and South African regions, showed some progress indices since the ICPD conference, including a 49 percent decrease in maternal mortality before the pandemic.

However, he said there was still a long way to go, with 80 000 women dying from preventable deaths during pregnancy. However, the lockdowns during the two waves of the COVID-19 pandemic had prolonged disruptions to SRHR services.

It was necessary to “sustain evidence-based advocacy to promptly detect changes to service delivery and utilization, and support countries to implement mitigation strategies,” Tewari said.

Ugandan Deputy Speaker Anita Annet Among expressed concern that one in five adolescent girls falls pregnant in Africa – many of whom drop out of school. With schools closed, the situation had worsened.

She called on parliamentarians to be the voice of the voiceless and ensure “you make strong laws that protect the women and youth. Ensure the appropriation of monies that support these marginalized people.”

A declaration following the meeting included advocating for increased budgets to meet the ICPD 25 commitments, including sexual and reproductive health services for all and contributing to the three zeros – preventable maternal deaths, unmet family planning needs, and eliminating gender-based violence.