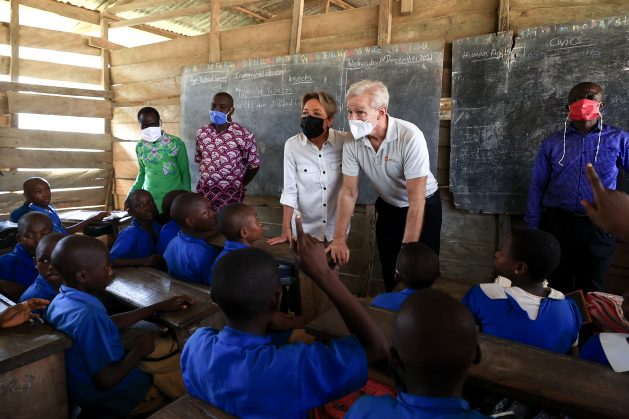 Yasmine Sherif, Director of Education Cannot Wait and Jan Egeland, Secretary General of the Norwegian Refugee Council meet students at the Souza Gare school in the Littoral region, Cameroon. The school hosts displaced children who have fled the violence in the North-West and South-West regions. Credit: ECW/Daniel Beloumou

Yaoundé, Cameroon, Dec 3 2021 (IPS) - Education is under attack in Cameroon. As one of the most complex humanitarian crises in the world unfolds, Education Cannot Wait’s director Yasmine Sherif and the Secretary-General of the Norwegian Refugee Council, Jan Egeland, say the children are pawns for grown men in a political conflict.

In an exclusive interview with IPS from Cameroon, where Sherif and Egeland are on a four-day visit, they told of the impact of this ongoing conflict between armed groups and government forces in this central African country.

“The situation in Cameroon is devastating, and education is under attack. Only last week, an attack in a school killed four children and one teacher. A girl had their fingers chopped off for attending school. The result is fear. Fear of going to school,” says Sherif.

Egeland agrees that children are the victims of violence that has nothing to do with them.

“Conflict between grown-ups on political, cultural, and governance issues that are very real and very important to settle are not being settled in negotiations. They are being settled by armed violence against children and life-threatening attacks on their places of learning,” he says.

In the face of threats, harassment, violence, kidnapping, and death targeted at teachers and school-going children, two out of three schools are closed in the North-West and South-West regions, the epicenter of the ongoing conflict between armed groups and government forces in this Central African country.

There is heightened alarm that the situation has placed an entire generation of children in Cameroon’s North-West and South-West regions at risk of losing lifelong learning opportunities. 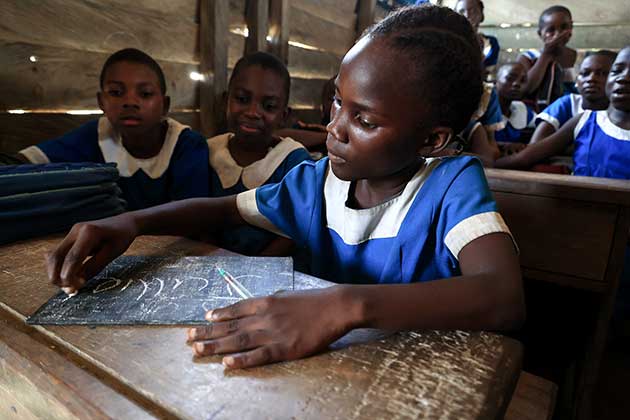 Girl writing on a blackboard at the Souza Gare school in the Littoral region, Cameroon. The school hosts displaced children who have fled the violence in the North-West and South-West regions. Credit: ECW/Daniel Beloumou

Sherif, who heads ECW, the global fund for education in emergencies and protracted crises, and Egeland have urged all involved to end violence against children.

Hundreds of civilians, including children, have been killed since January 2020 in the North-West and South-West regions. Armed groups and government forces are in violent conflict, and the risks and needs of children impacted by the conflict have increased.

“This is among the most complex humanitarian crises in the world today. Children and youth are having to flee their homes and schools, are threatened with violence and kidnapping, and are being forced into early childhood marriage and recruited into armed groups,” says Sherif.

“We call for urgent support from donors to respond to this forgotten crisis. We call for the respect of human rights and adherence to the principles of international humanitarian law and the Safe Schools Declaration – and for partners to redouble efforts so all children and adolescents can get back to the safety, protection, and hope that quality learning environments provide.”

Sherif says nine out of 10 regions of Cameroon continue to be impacted by one of three complex humanitarian crises, including the North-West and South-West crisis, conflict in the Far North, and a refugee crisis of those fleeing Cameroon.

Children are devastatingly affected as over one million children need urgent education support. While impressed by their resilience, courage, and hunger for education, Sherif says this is not enough to keep them in school.

“The children will need protection, school meals, health and psychosocial support, and tools for teachers to do their job,” she says.

To address these multiple emergencies, made worse by COVID-19 and climate change, Sherif says ECW is working hand-in-hand with organizations in Cameroon, the Ministry of Basic Education, Ministry of Secondary Education and UN agencies, the Norwegian Refugee Council, and civil society education partners to build a multi-year resilience programme in Cameroon.

Egeland tells IPS that the partnerships are timely and critical because what is happening in North-West and South-West regions in Cameroon deserves international outrage. 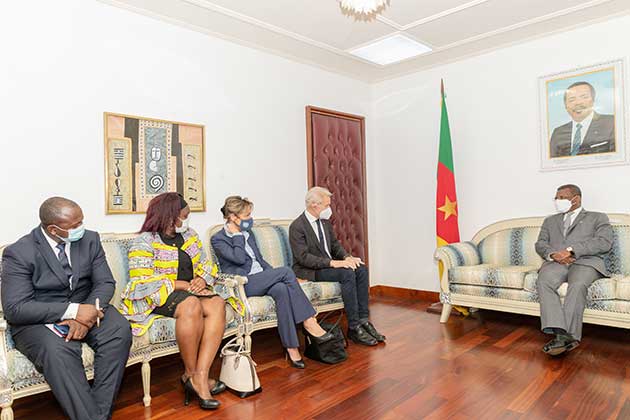 He says more than 700,000 children in Cameroon are “either completely out of school because they lost their school at gunpoint or because they ended up with 90 others in cramped classrooms in the few remaining schools. Children should never be pawns for grown men in political conflict.”

Sherif fears that even more children will exit the education system and not return.

“I feel very strongly about improving and reinforcing the education rights of all children in Cameroon. Just because you live in Cameroon does not mean that you cannot go to school. Legal provisions for children impacted by conflict must be activated,” she says.

With many schools remaining closed or non-operational, Sherif says there is cause for worry. In the absence of urgent, timely, and practical risk management interventions such as building walls around schools and reinforcing on-school security, an entire generation of children in Cameroon could become illiterate.

For schools to reopen, Egeland says that children must be exempted from political grievances. Keeping with international law, he says safe zones or areas established in armed conflict for the protection of civilians must be declared, and genuine negotiation between warring groups activated.

He says negotiations are much needed as the situation is now out of hand – five years since renewed tensions between the government and armed groups imploded into an emergency crisis.

On his visit to Cameroon three years ago, Egeland says an estimated 500,000 people were displaced. Today, the figure has risen to over 700,000 people.

Sherif says the situation is untenable and that a resilient, safe and secure learning environment is the most pressing need for children in Cameroon.

“ECW is contributing US$25 million over three years and calls for other donors to fill the gap, which is estimated at US$50 million. When fully funded, the programme will provide approximately 250,000 children and adolescents with access to safe and protective learning environments in the most-affected areas,” she says.

Egeland says such investments are much needed.

He told IPS the turmoil had not dimmed the children’s dreams of a bright future in nursing, medicine, and law.

There is an urgent need for the international community to focus on Cameroon – a forgotten and neglected conflict.

“Cameroon should no longer be the most neglected in terms of funding per person in need. The country is significantly underfunded despite the ongoing humanitarian crisis and increasing vulnerabilities for children,” he cautioned.

He further says that warring groups must be encouraged to reach compromises because the end of the ongoing conflict will be a beginning full of immense opportunities for Cameroonian children.

Meanwhile, Sherif says the situation is so dire that school-going children dress in camouflage, so violent armed groups do not target them. They need secure environments now – their education cannot wait.