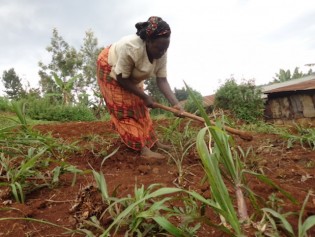 By Esther Ngumbi
Recently, the UK contributed £17 million to support the Food and Agriculture Organization of the United Nations (FAO) to continue their efforts to combat the desert locust surge in East Africa and improve early warning and forecasting systems.

By Esther Ngumbi
African countries are beginning to reopen borders, and this is finally enabling many citizens to resume their normal life. However, there is still an urgent need for African countries to prioritize agriculture to tackle food insecurity issues that have been exacerbated by COVID and will continue to be an issue into the near future. According to the latest estimates by the United Nations World Food Programme, COVID-19’s compounding effects could drive 270 million people into food insecurity.

By Esther Ngumbi
During a crisis, such as the novel coronavirus, whose impact changes with every passing minute, the urge to listen to and watch the news, and get firsthand insights and real time updates can be constant. Indeed, millions of Americans are frequently checking the news. I know I am. What I’ve noticed on three of the major TV stations I’ve watched across the day is the absence of diversity in the experts commenting on the pandemic. This is inexcusable.

Is Our Academic System Ready for a New Coronavirus Normal?

By Esther Ngumbi and Brian Lovett
Institutions of higher education have a responsibility to lead by example and to provide current, high-quality information to the people and communities that support them. This responsibility is no clearer than during a public health and information crisis like the one presented by this novel coronavirus.

By Esther Ngumbi
United Nations World Food Program recently released 2020 Global Hotspots Report. According to the report, millions of citizens from Sub-Saharan African countries will face hunger in the first half of 2020 for several reasons including conflict, political instability and climate-related events such as below-average rainfall and flooding.

By Esther Ngumbi
Recently, Italy declared a State of Emergency because of record-breaking flooding while on 11 November, it did not rain anywhere on the continent of Australia, also breaking a record.

Fighting Climate Change: We Must Not Forget the Soils

By Esther Ngumbi
Around the world, citizens took to the streets to demand their governments address climate change. In the U.S., this widespread activism illustrates the findings of a newly released report by the Chicago Council on Global affairs which found for the first time that the majority of Americans consider climate change a threat and the most critical foreign policy issue facing the country.
Next Page »
ADVERTISEMENT ADVERTISEMENT