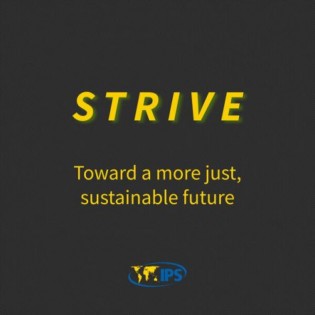 By Marty Logan
In the final months of 2021 you likely saw countless media reports of migrant men, women and children getting blocked at borders trying to enter various countries. Two flashpoints were the Mexico-US border and the border between Poland and Belarus, but there were many others.

By Marty Logan
2020 was a year of tremendous upheaval. The murder of George Floyd, followed by global Black Lives Matter protests, Covid-19 and the stark light that the pandemic shone on inequality within countries and between the global north and south, protests and brutal repression after elections in Belarus, ongoing demonstrations for climate action led by youth around the world, to name just a few.

By Marty Logan
Do you think it’s possible to transform communities that are stagnating from a lack of currency into places where people’s income-generating activities create a vibrant, self-sustaining circular economy?  It is in parts of Kenya that are using the community currency Sarafu, according to today’s guest.

By Marty Logan
Footage of flames engulfing bodies at makeshift funeral pyres and stories of people dying in cars as drivers desperately raced from hospital to hospital seeking a bed. These scenes marked the second wave of the Covid-19 pandemic in India just months ago.

By Marty Logan
“Reconstruction and reconciliation require finances and physical structure, but the families of the victims of the conflict first and foremost need their integrity protected. Physical and financial compensation mean little without justice,” wrote Suman Adhikari nearly 11 years ago, during a ceasefire in Nepal’s Maoist insurgency.

By Marty Logan
Just weeks after giving up her post, the former president of the parliament of Norway's indigenous Sami people has lambasted Sami journalists for shoving aside their culture in the rush to get a 'scoop'.

By Marty Logan
Hiring a private firm to manage the drinking water system in Nepal's capital violates the right to health guarantee in the country's interim constitution, activists are set to argue before the Supreme Court.

By Marty Logan
Hiring a private firm to manage the drinking water system in Nepal's capital violates the right to health guarantee in the country's interim constitution, activists are set to argue before the Supreme Court.

By Marty Logan
A 12-day uprising by Nepal's 'madheshi' (plains) people has forced the revolutionary government to promise it will change the state structure to more fairly distribute power to excluded groups.

By Marty Logan
Five people have died and a curfew has been imposed in a district in Nepal's plains region after a clash between Maoists and activists for regional autonomy left a student dead.

By Marty Logan
Five people have died and a curfew has been imposed in a district in Nepal's plains region after a clash between Maoists and activists for regional autonomy left a student dead.

By Marty Logan
While former Maoist outlaws have traded battle fatigues for grey suits and seats in Parliament, torture victim Pradesh Bahadur Bista is making the rounds of hospitals for proof that his chronic pains were caused by daily torture during 100 days of illegal detention by soldiers of the Nepali Army.

By Marty Logan
Former Maoist rebels entered the parliament that once outlawed them Monday, filling enough seats to become the second-largest party in the temporary government.
Next Page »
ADVERTISEMENT ADVERTISEMENT