TEHRAN, Jun 21 2009 (IPS) – The political crisis that broke out over the Jun. 12 elections entered a new stage here Saturday afternoon as the government’s security forces moved aggressively – and sometimes with lethal force – against demonstrators throughout Iran’s capital city. 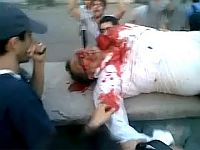 
Back to top
mobile desktop