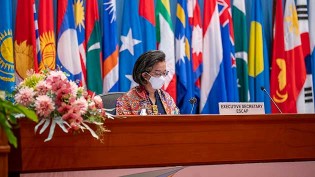 By Neville de Silva
When I ended last month’s column hoping that April would not prove to be hapless Sri Lanka’s ‘cruellest month’ (in the words TS Eliot), I hardly anticipated the current turn of events.

In Sri Lanka, Rajapaksas on the Ropes

By Neville de Silva
With the economy in freefall and basics such as food and fuel in dangerously short supply, there is mounting public anger against a failing and desperate government in Sri Lanka.

A Tale of Two Refugee Crises

By Rachael Reilly and Michael Flynn
Russia’s brutal and devastating invasion of Ukraine has triggered the largest and fastest refugee movement in Europe since World War II. After only a single week, more than one million people had already fled the country.

In the second week of January 2022, Purushottam—locally known as Prashant—a street vendor in central Delhi’s Connaught Place area, died by suicide. It was later discovered that the reason for his death was his inability to pay certain debts.
Next Page »
ADVERTISEMENT ADVERTISEMENT