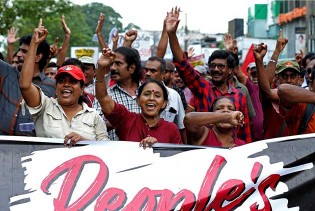 By Andrew Firmin
Economic crisis has provoked a great wave of protests in Sri Lanka. People are demanding the resignation of the president, blamed for high-handed and unaccountable decision making, exemplified by his introduction of an agricultural fertiliser ban in 2021 that has resulted in a food crisis. People don’t just want the president’s removal: they want a change in the political balance of power so that future presidents are subjected to proper checks and balances. Hope comes from the wide-reaching and diverse protest movement that has put aside past differences to demand change.

By Andrew Firmin
It is now clear diplomacy matters little to Vladimir Putin. Despite the efforts of a string of presidents and prime ministers to prevent conflict, on 24 February, Putin started the war he’d been itching for.

By Oliver Henman and Andrew Firmin
Recent protests in Ethiopia have seen people demonstrate in their thousands, angry at their authoritarian government, its favouritism towards those close to the ruling elite, and its failure to share the country’s wealth more equally.
ADVERTISEMENT ADVERTISEMENT