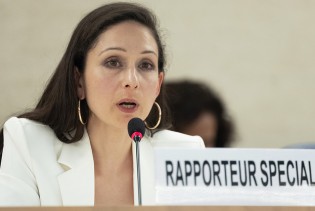 By Jeffrey Moyo
Zimbabwe’s rail transport system may be nearing extinction if the government does not take drastic action to solve the series of operational challenges that have made commuter and goods train services rare here.

By IPS Correspondents
For five centuries, Europe has taken it upon itself to enlighten the world, teaching it ways to address and overcome crises, from ideas and wars to missionary work and genocides.

By Inés Benítez
The May 15 Movement (15-M) which sprang up as huge rallies in public squares in Spain's largest cities to protest against the political, economic and social system, is multiplying as assemblies in local neighbourhoods in provincial capitals and other municipalities.

By Andrea Lunt
More than 200 years ago, one of the United States' founding presidents, Thomas Jefferson, famously remarked: "Every generation needs a new revolution." Today, his words are more relevant than ever, as young people across the world mark 2011 as a year of change.

By Rousbeh Legatis
"The agenda for women's rights and empowerment in each country must be supported by the political leadership," says Norah Matovu-Winyi, Executive Director, African Women's Development and Communication Network (FEMNET).

By Sylvia Borren
While the international community is now talking of a triple global crisis – food, climate and economic - a weeklong session of the World Social Forum (WSF) is coming to a close in Dakar, Senegal.

By Kanya D'Almeida
As the powerful collective energy continues to surge through Dakar, veterans of the World Social Forum (WSF) are taking a moment to examine the history, trajectory and future of the alternative global movement.

By Isolda Agazzi
It is only the second time that the World Social Forum (WSF) takes place in Africa, the first one having been held in Nairobi, Kenya, in 2007. Since the start of the WSF in Porto Alegre, Brazil, 10 years ago, the organisers have been building African participation.

Q&A: Revolutions Are Not Widgets