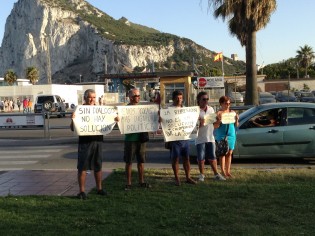 By Alberto Pradilla
"The situation is messed up. Spain is on the verge of a civil uprising and the government is trying to divert attention" by tightening border controls to Gibraltar and provoking tension, complained Manuel Márquez, a delegate for the Socio-cultural Association of Spanish Workers in Gibraltar (ASTECG).

By Alberto Pradilla
One of every three euros that the Spanish government plans to spend in 2013 will go to servicing the public debt.

Millions of Jobless Desperate in Spain

By Alberto Pradilla
The sun is shining in Spain as it does every summer. But millions of people in this crisis-stricken country are living in the shadow cast by Europe’s highest unemployment rate.

By Alberto Pradilla
"This is war. Parliament has got to go! They're trying to make civil servants take the blame for a situation that was caused by the banking sector and which the government has allowed to happen."
ADVERTISEMENT ADVERTISEMENT