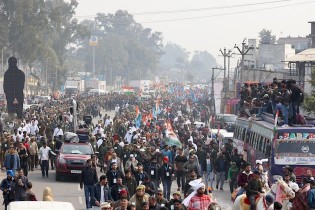 COP27: Climate Justice: Where do the Religiously Marginalised Fit in?

By Mariz Tadros
Climate change reductionism – assuming the causes and the redress for those suffering the worst impacts of extreme weather lies with climate change alone - undermines the rights of religiously marginalised persons, but broadening whose rights are being advocated for in climate change can offer redress.

COP27: Religious Multilateralism: An Endangered Species in the Age of Triple Planetary Crises

By Azza Karam
In this year’s COP 27 two-weeklong summit in Egypt, which concludes November 18, a rough count indicates there will be 40 different sessions organised by, for, and about, religious engagements in/on climate change and related issues. This is likely the highest number of events by and around religious actors, organised at a COP event.

COP27: Bolsonaro’s Defeat is a Triumph for Climate Change Advocates

By Alon Ben-Meir
The electoral defeat of Brazil’s Jair Bolsonaro is a triumph for everyone who is concerned about the peril of climate change. Bolsonaro’s well-deserved defeat could help save the Amazon rainforest, which has been ravaged under his criminal rule, and the process of reversing the looming climate change catastrophe can begin

By Christine M. Sequenzia and Soraya M. Deen
Eleven out of 57 members of the Organization of Islamic Cooperation (OIC) still sanction the death penalty for blasphemy and apostasy, silencing their citizens and emboldening violence by non-state actors.

‘Longings’ Of Ana of Galilee: Voice of Everywoman, Everywhere, And in Every Age!

By Iftekhar Ahmed Chowdhury
The American author Sue Monk Kidd's award-winning novel The Book of Longings has a sensational beginning, despite the simplicity of the phraseology: It starts: "I am Ana. I was the wife of Jesus bin Joseph of Nazareth". It would be impossible for anyone not to swallow this bait with enormous curiosity, and follow through with reading what is well and truly a 'page-turner'. The book is crafted to be breezy and exciting, necessary perhaps to better deliver its message. This historical work of fiction was the subject of discussion at a recent seminar organized by the Dhaka -based 'The Reading Circle'. The event was held in a 'hybrid' format, an experiment of the Circle in consonance with the evolving practices of the Covid era. There was a core of participants in Dhaka, and other members joining in from London, Paris, and Singapore. Chaired by Professor Razia Khan, the list of speakers and commentators included Niaz Zaman, Nusrat Huq, Tanveerul Haque, Ameenah Ahmed, Shahruk Rahman, Asfa Husain, Nazmun Nahar, Sarazeen Ahana and myself. The following essay is based on my remarks made on the occasion.

By Osamu Kusumoto
Shinzo Abe, the longest-serving Prime Minister of Japan, has died. It was a murder caused by a personal grudge rather than political terrorism. And it was not a direct grudge against Mr. Abe. A religious group had supported Mr. Abe, and a murderer with a grudge against the religious group killed him. Murders targeting politicians are often related to political messages or claims. This is a very unique case in that the murder was committed out of a personal grudge, not against the individual for what he did, but against the organization that supported the individual.

Politics in Pakistan: The Captain’s Crisis!

“O, Captain! My Captain! Our fearful trip is done,
The ship has weather’d every rack, the prize we sought is won,
The port is near, the bells I hear, the people all exulting,
While follow eyes the steady keel, the vessel grim and daring….”
Walt Whitman

Chronicle of a Tragedy Unfolded

By Vani S. Kulkarni
The Karnataka court’s verdict to uphold the hijab ban has intensified the protest in the state. The row has been typically perceived by many as manufactured by the politicians pointing to the culture of politics in the state. While the jury is still out there on this, evidence on how state’s local culture constructs and deconstructs religious identity allows drawing conclusions with some definitiveness. The culture of state’s politics is one side of the coin. Considering its flip side – politics of culture, particularly of the religious cultural identity, is just as relevant.

By Mushahid Hussain
The retrenchment of American power in the Middle East and the larger Muslim world, coupled with the war in Ukraine, has provided a geopolitical breather for China. Beijing is effectively deploying this to make strategic inroads into the region, given this vacuum and focus on Europe.
Next Page »

Religion plays a big and in some cases growing role in the socio-political dynamics within countries and often is a factor in civil and cross-border conflict, conflict resolution and peace building. From Burmese monks' marches to the role of religious fundamentalism, this dedicated site gathers IPS stories about how religion affects our world, from daily life to geo-politics.