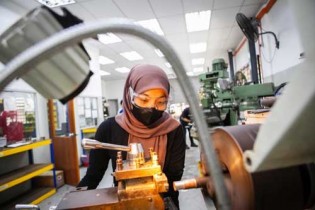 By Nadya Subramaniam and Fauwaz Abdul Aziz
Technical and Vocational Education and Training (TVET) in Malaysia originated from the colonial and early post-colonial governments’ need for trained and skilled manpower to run state agencies and projects.

By Farhana Haque Rahman
Empowered by a global pandemic and the drum beats of war, the strongest despots are growing more despotic, and criminal cartels even more brazen in their violence. Extremists of various hues are also stepping out of the shadows. Just when the world most needs press freedom to thrive, the liberties that societies only really treasure when they are emasculated are coming under more pressure from different directions, old and new.

By Daud Khan
This aphorism which dates back to the late 1940s points out that one’s position on issues (where you stand) is shaped by your relationship with the events taking place (where you sit).

“It Isn’t Easy Being a Journalist in Kashmir”

By Bisma Bhat
My name is Bisma Bhat and I am a journalist in Srinagar, Kashmir. I currently work as a features writer at Free Press Kashmir, a weekly magazine.

By Shawn W. Crispin
One year since a democracy-suspending coup, press freedom is dying in Myanmar. A military campaign of intimidation, censorship, arrests, and detentions of journalists has more recently graduated to outright killing, an escalation of repression that aims ultimately to stop independent media reporting on the junta’s crimes and abuses.

By Sania Farooqui
As countries across South Asia continue to battle the deadly Covid-19 pandemic, causing serious public health and economic crisis, this region, which is home to almost 2 billion people, is also grappling with the erosion of democratic norms, growing authoritarianism, the crackdown on freedom of press, speech and dissent.
Next Page »

Journalism is dangerous work. Dozens of reporters and other media workers are killed in the line of duty each year. Hundreds more face threats, intimidation, and harassment as they risk their lives to let us know what is going on in war zones and as they root out corruption. In the Information Age, the Internet provides us with new ways to disseminate the news even as it poses new threats to press freedoms.

IPS Director General Farhana Haque Rahman was invited by UNESCO as a panelist at the World Press Freedom Day 2017 gathering in Jakarta, in the Plenary Session: Quality journalism: a public good for just, peaceful and inclusive societies.