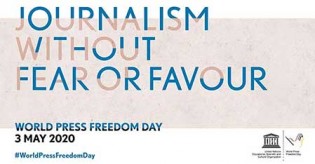 By Farhana Haque Rahman
Mass public pressure backed by the weight of scientific reports is starting to bring governments to their senses as the annual UN climate summit kicks off in Madrid today.

By Farhana Haque Rahman
Statistics and stories. When aid agencies appeal for funding to tackle the latest refugee crisis and journalists do their reporting, then these are the two narratives most chosen -- one impersonal and the other upfront and individual. The sheer numbers can feel overwhelming. The UN refugee agency UNHCR says more than 70 million people are currently displaced by conflict, the most since the Second World War. Among them are nearly 26 million who have fled their countries (over half under the age of 18) and 3.5 million more are registered as asylum seekers.

By Farhana Haque Rahman
Mottled and reddish, the Lake Oku puddle frog has made its tragic debut on the Red List, a rapidly expanding roll call of threatened species. It was once abundant in the Kilum-Ijim rainforest of Cameroon but has not been seen since 2010 and is now listed as critically endangered and possibly extinct.

By Farhana Haque Rahman
Barely a week passes without alarming news of the most recent scientific research into the global climate crisis compounding a growing sense of urgency, particularly the impact on small island states from rising sea levels and extreme weather.

By Farhana Haque Rahman
The year now closing, 2018, culminates an extraordinary period in the quest for a world where sexual harassment and assault are, as the words indicate they should be, rare and punished.

Dear Nobel Laureate Aung San Suu Kyi, We learned today that you will address the Rohingya issue via television in Myanmar on 19 September - over 144 hours from now.

By Farhana Haque Rahman
When you were finally able to accept your Nobel Peace Prize, you spoke eloquently of the ultimate aim of a world in which “every corner is a true sanctuary where the inhabitants will have the freedom and the capacity to live in peace.”

By Farhana Haque Rahman
2016 has been a dramatic year for the world, and for the media. Political dysfunction appears to be on the rise, putting social media under increasing critical scrutiny even as prestigious global commercial news brands capable of acting as the fourth estate are downsizing.

By Farhana Haque Rahman
The new UN Secretary-General Antonio Guterres, who takes office on January 1, arrives with strong credentials -- both as a former Prime Minister of Portugal and an ex-UN High Commissioner for Refugees.

The Real Heresy of London’s New Mayor Is that He Is a Liverpool Fan?

By Farhana Haque Rahman
Sadiq Khan is not just the new mayor of London, but happens to have individually won more votes than any other politician in British history. Prime ministers and members of Parliament run in their home districts, where the total number of ballots are fewer.
Next Page »
ADVERTISEMENT ADVERTISEMENT