2020: A Yet More Devastating Year Closes With At Least Some Signs Of Hope 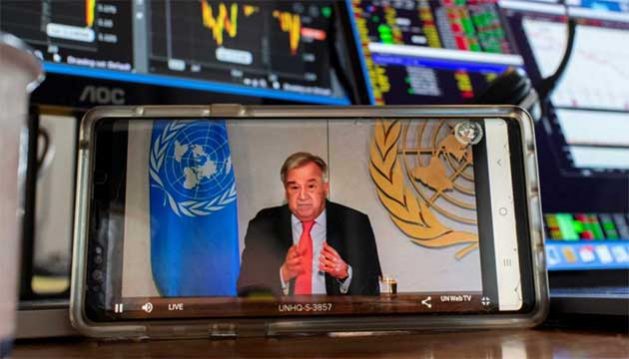 ROME, Dec 23 2020 (IPS) - Despite its grim record of multiple natural disasters and a deepening climate crisis, one could be forgiven for looking back on 2019 with a degree of nostalgia. There is no disguising the extent of the calamity wrought this year by COVID-19, yet as we approach the end of 2020 we may also draw strength from positive developments emerging.

No review of 2020, as seen through the eyes of IPS reporters and contributors around the world, could begin without paying our respects to the nearly 1.5 million people who have died from the coronavirus, many of them care workers trying to save the lives of others.

But the pandemic, declared as such by the World Health Organization on March 11, has inflicted much wider damage in exposing the frailties of governments, societies, economies and health systems, particularly in those countries that chose to ignore the warnings and advice of the WHO and played down the crisis.

The US administration in particular sought to hide its shortcomings by attacking and ultimately withdrawing from the WHO, while in contrast Rwanda, for example, had set up a COVID-19 joint task force even before the pandemic was declared.

But coming on top of the climate emergency, conflict and economic decline, COVID-19 has brought at least seven countries to the brink of famine, leading the UN to earmark emergency funding for Afghanistan, Burkina Faso, the Democratic Republic of the Congo, Nigeria, South Sudan and Yemen. But with international solidarity fraying at the seams, the UN is facing a massive funding shortfall for the estimated 250 million people needing humanitarian aid around the world.

Any hopes that the pandemic might persuade warring parties to cease fire have been dashed as well. New conflicts have broken out and old ones have resumed. Thousands are believed to have died in fighting in the enclave of Nagorno-Karabakh in Azerbaijan. The Horn of Africa is being destabilised again as Ethiopia’s Prime Minister Abiy Ahmed, winner of the 2019 Nobel peace prize for making peace with Eritrea, launches an offensive against the region of Tigray, driving refugees into Sudan where the World Food Program, the 2020 Nobel peace laureate, is struggling to cope.

This year, the 25th anniversary of the Beijing Declaration and Platform for Action, was to have been a landmark moment for gender equality, but the coronavirus pandemic has instead widened inequalities for girls and women across every sphere. While men are more likely to die from COVID-19, women are facing the full blow of the socio-economic fallout as well as seeing a reversal in equality gains made over the last two decades, according to an all-women panel of international thought leaders, meeting virtually for an IPS Webinar.

Susan Papp, Women Deliver’s managing director for Policy and Advocacy, told IPS: “To achieve the Sustainable Development Goals and have a strong response and recovery to COVID-19, we must apply a gender lens in order to address the unique needs of girls and women, and leverage their unique expertise.”
Instead, violence against women and girls, particularly domestic violence, rose sharply in many countries.

Racism too was back on the front pages with a vengeance, driven by police killings in the US of George Floyd, Ahmaud Arbery and Breonna Taylor which sparked a wave of mostly peaceful but sometimes violent demonstrations across the world, fuelling the Black Lives Matter movement and demands for an end to racial injustice.

Prompted by the killing on May 25 of George Floyd in Minneapolis, UN Secretary General Antonio Guterres made an impassioned speech, saying the values of reason, tolerance and mutual respect were being challenged by nationalism, irrationality, populism, xenophobia, racism, white supremacism and different forms of Neo-Nazism.

With communities under such stress, large economies shrinking and freedom of movement restricted, a fall in harmful global warming emissions was one dividend to be hoped for under lockdown. Alas, not much at all. The World Meteorological Organization, releasing its annual greenhouse gas bulletin in November, said accumulated CO2 levels in the atmosphere had clearly increased despite a cut in emissions of between 4.2% and 7.5%. “The lockdown-related fall in emissions is just a tiny blip on the long-term graph,” said WMO Secretary-General Petteri Taalas.

Against such a dire backdrop, and with hopes of a reprieve dashed by a second wave of COVID cases and the new variant in the final months of 2020, IPS reporters continued to chronicle the valiant efforts of aid workers, activists, scientists and politicians, many well away from the COVID limelight.

With Africa acutely aware of the need to establish food sustainability and security for its rapidly growing population, the International Institute of Tropical Agriculture (IITA) pressed on with its Enhancing Capacity to Apply Research Evidence (CARE) project, with funding from the International Fund for Agricultural Development (IFAD),enabling 80 young African scholars to develop workable policies to expand agribusiness and youth involvement.

Improving nutrition is vital to tackling the Non-communicable diseases which have been critical in driving the death toll from the coronavirus. The need to address nutritional challenges through food systems has never been so critical, enhancing the importance of the UN 2021 Food Systems Summit, supported by the Barilla Center for Food & Nutrition which has ranked 67 countries in The Food Sustainability Index developed with the Economist Intelligence Unit.

The battle against communicable diseases goes on too, even tackling persistent and now relatively rare relics such as leprosy. While falling worldwide, cases have increased in Brazil in recent years however, and Yohei Sasakawa, WHO Goodwill Ambassador for Leprosy Elimination, insists he will keep working for a world where people affected by leprosy and all those suffering from various forms of social discrimination all have a place in inclusive societies.

This too should have been the year of COP26, the critical climate crisis conference which thanks to COVID-19 will be staged in 2021 instead, in Glasgow. Some governments have hesitated to step up their Paris Agreement commitments to cut emissions but the Dominican Republic’s President Luis Abinader arrived at his inauguration in August in an electrically driven car as a symbolic gesture of his intentions, working with the support of The Climate Action Enhancement Package (CAEP), an initiative of the NDC Partnership.

Devastating wild fires in Australia which continued into 2020 and the summer eruption of vast blazes from California to Washington state were a stark reminder that whatever happens with the pandemic, the world is still failing to act coherently in tackling the climate emergency.

Which takes us to those year-end signs of hope. Having defeated Donald Trump in the US elections, president-elect Joe Biden appointed former secretary of state John Kerry as climate envoy for when the new Democratic administration takes office in January. Four years ago, on behalf of the US, Kerry signed the Paris climate agreement, which Trump left and Biden has promised to rejoin, along with US membership of WHO. Kamala Harris, a California senator, will become the first female vice president of the US.

Biden’s victory and the news that COVID-19 vaccines by Pfizer are now being being distributed in a number of countries have shown high rates of efficacy leading us to hope that the pandemic will be in retreat within months – though a tough northern winter still lies ahead – and the US will once again soon play a leadership role on the international stage.

High levels of global cooperation are required, not just in ensuring that vaccines are distributed all over the world, but also in preparing for the next pandemic which could prove even worse.

Coverage of Covid-19 naturally dominated the news in 2020 but lockdowns around the world did little to slow the killings of reporters in the most dangerous of countries, with Mexico remaining among the worst. According to the Committee to Protect Journalists, 40 journalists and media workers were killed around the world in the first 11 months of 2020, compared with 51 in all of 2019.

The toxic polarisation of US politics, as witnessed by the unedifying spectacle of Trump’s refusal to concede while making unsubstantiated accusations of electoral fraud, may outlive the pandemic, however. Populist-driven politicians like Trump and Brazil’s President Jair Bolsonaro have also corrupted public faith in scientists and expertise in general, at the risk of undermining a broad take-up of vaccines once approved by regulatory authorities.

This disastrous decline in respect of evidence-based truth came to the boil in 2020, fuelled by a rampant and mostly uncontrolled social media (even if Trump’s tweets did have health warnings attached).

Cynical manipulations of public opinion – be they for political or financial gains – make it even more vitally important that IPS Inter Press Service continues to give a voice to the voiceless and fosters evidence-based reporting of development news with a strong sense of social responsibility. In this IPS plays a unique role among news outlets.

While thanking our network of dedicated reporters around the world and our editors for their work in 2020, special mentions go to IPS correspondent Neena Bhandari who won the NSW Premier’s Multicultural Communciation Award for the Best Print Report for a two-part series for our reports on Modern Slavery/Human Trafficking: https://www.ipsnews.net/2020/05/modern-slavery-asia-pacrific-fuelled-widespread-poverty-migration-weak-governance-part-1/
https://www.ipsnews.net/2020/05/forced-marriage-organ-trafficking-rife-asia-pacific-part-2/
And to Ghana correspondent Albert Oppong Anash for winning the Ghana Journalists Association Science Award for his report on dangerously high levels of aflatoxins in crops:
https://www.ipsnews.net/2019/10/ghanas-grains-groundnuts-face-increasing-contamination-amid-increasing-temperatures/
And finally to our correspondent Jewel Fraser who has produced a number of podcasts for IPS and credits our support for her win of this bursary for emergingproducers: https://www.wcsfp.com/entries/emerging-producers

As we stumble into 2021 preparing to rebuild and relaunch, the UN Secretary General has clearly defined the mission that lies ahead and the science and tools to help us.

“Our planet is broken,” Guterres warned in his State of the Planet speech on December 2, defining the “central objective” of the UN in 2021 to fight the climate and biodiversity crises which will involve building a global coalition to reduce emissions to net zero by 2050.

All nations are called upon to end fossil fuel finance and subsidies, shift the tax burden from tax payers to polluters, integrate the goal of carbon neutrality into all economic and fiscal policies, and help those who are already facing the impact of climate change.

The 2021 agenda has to be ambitious and radical. As Guterres said: “The science is clear…. We face a moment of truth.”

The author, a former senior official of the Food and Agriculture Organization of the United Nations and the International Fund for Agricultural Development, was Director General of IPS Inter Press Service, between 2015-2019. She is Senior Vice President IPS and Executive Director IPS North America.