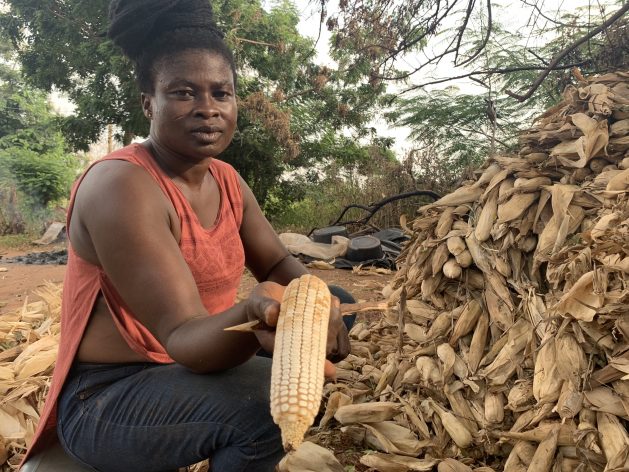 BONO EAST REGION, Ghana , Oct 16 2019 (IPS) - Adwoa Frimpomaah, a smallholder farmer from Dandwa, a farming community in Nkoranza, in Ghana’s Bono East Region, and her two children have been consuming insect-infested and discoloured grains produced from their three-acre farm.

“Just look, I harvested this maize a week ago and after de-husking, majority of the cobs are either rotten, mouldy, or discoloured. I spent all my resources on this farm so I will sell the good grains, and wash the darkened grains, take out the rotten ones and eat it because we have no food,” she tells IPS.

Part of the yield from the April to July farming season, the grains that Frimpomaah and her family consumed are discoloured and mouldy because of the humidity and high temperatures here.

Dr. Rose Omari, Senior Research Scientist at the Science, Technology and Policy Research Institute, Council for Scientific and Industrial Research, describes these discoloured and mouldy grains as potentially being contaminated by harmful aflatoxins, which are both toxic and carcinogenic.

Researchers say that Ghana, like many West African countries, has high levels of aflatoxins in a majority of its staples, such as maize, peanuts, millet, and sorghum.

“Consumption of both maize and groundnut results in high human aflatoxin exposure in Ghana. However, most Ghanaians have little to no knowledge of either what aflatoxins are or the health risks posed by these toxins,” a 2018 report titled ‘Prevalence of Aflatoxin Contamination in Maize and Groundnut in Ghana’ states.

“Aflatoxins are one of the most potent and dangerous groups of mycotoxins worldwide. Over four billion people in developing countries are repeatedly exposed to aflatoxins, contributing to greater than 40 percent of the disease burden in these countries,” an explanation on the characteristics of aflatoxins states.

This is in addition to economic losses.

“The trade sector has been affected as well. Commodities from Ghana (peanut butter, spices, and edible seeds) exceeding tolerance thresholds have been rejected in European borders. As a consequence, Ghana faces a threat of an export ban of aflatoxin-susceptible commodities if necessary actions to reduce aflatoxin levels in trade commodities are not taken,” the 2018 report titled ‘Prevalence of Aflatoxin Contamination in Maize and Groundnut in Ghana’ states.

Other small holder farmers are also feeling the impact.

“Yesterday an aggregator came here to convince us to sell a 100-kilogram sack of maize for GHC 90 ($16). We do not get the right market because of high levels of aflatoxins that affects the quality of our grains,” smallholder farmer Regina Dabiali, 30, tells IPS.

“It is demotivating for us to work hard throughout the season and not receive our deserved wage. We are not progressing in life.” 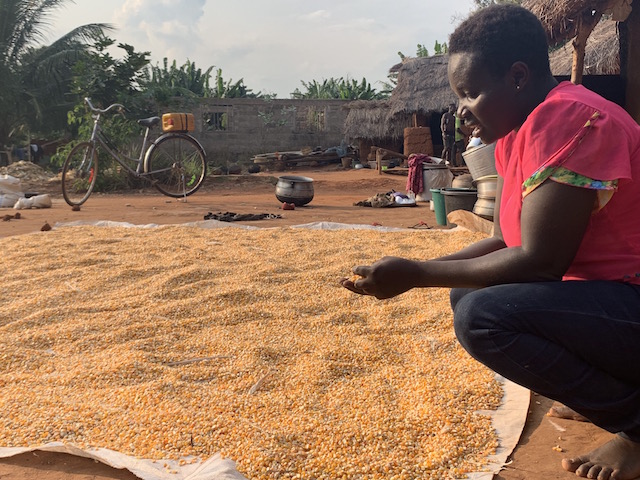 Ghanian smallholder farmer Regina Dabiali says they are increasingly losing out on harvests as their grains are becoming affected by aflatoxins. Credit: Albert Oppong-Ansah/IPS

People unwittingly exposed to the toxins

Gladys Serwaa Adusah, the leader of the farming cooperative, Middle Zone Women Farmers, says that aflatoxin contamination is not only robbing people of income, but also is “deadly and scary”.

“I know that some traders in their quest to maximise profit prepare and sell unwholesome corn dough by mixing aflatoxins contaminated grains with the good ones. It is used to prepare a variety of dishes, including porridge, kenkey and banku, (local dishes) which many people eat unknowingly,” she says.

Omari tells IPS that studies conducted show that the continuous intake of food that contains high levels of aflatoxins, is detrimental to the health of both adults and children. In adults, she says, studies validate that the accumulation of low levels of aflatoxins over time damages the human liver, resulting in liver cancer. It also causes acute health conditions including, vomiting, abdominal pains, coma, and death when highly contaminated products are consumed.

Omari says, “It is a fact that in sub-Saharan Africa children are exposed to aflatoxins very early in life, including in utero through maternal food intake, during breastfeeding, through weaning and post-weaning periods through foods prepared from aflatoxin-contaminated peanuts and maize.”

“This leads to malabsorption, micronutrient deficiencies, impaired immune function, and vulnerability to gut infections, which all lead to impaired growth and malnutrition.”

Omari says, according to the latest Ghana Multiple Indicator Cluster Survey, stunting in Ghana is highest among children under the age of five in the Northern Region and lowest in the Greater Accra region.

Referencing a study she conducted in 2018, together with other researches, Omari reveals that over 64 percent of weanimix (food made of maize, peanuts and beans) samples tested for high levels of aflatoxins, above 10 parts per billion (ppb) codex standards for process foods.

“The prevalence levels in this country are very high. These products ideally should not be on the market because safety-wise it is not wholesome. Most especially it is food for children who are the most vulnerable, ” she says.

However, according to the Food Sustainability Index, a global study on nutrition, sustainable agriculture and food waste developed in collaboration between the Barilla Centre for Food and Nutrition Foundation and the Economist Intelligence Unit, Ghana has a malnourishment prevalence score of 74.2 out of 100, where 100 equals the highest sustainability and greatest progress towards meeting environmental, societal and economic Key Performance Indicators.

Though quality Assurance Manager at Nestlé Ghana, Raphael Kuwornu, tells IPS that the issue of high levels of aflatoxins is of great concern to the company, “because we produce food for both adults and especially infants”.

“As a result we are working with a roadmap, which would see a continuous reduction in aflatoxin from 0.5ppb to 0.2ppb by 2020 for companies that supply us with maize grains,” he says.

Temperatures soar and so does prevelance of aflatoxins

Conditions favourable for the development, growth and dispersion of these fungi is between temperatures of 18 to 42° Celsius.

Since 1960, she states, Ghana’s whole mean annual temperature rose by 1° Celsius and projections shows a further increase. “This is anticipated to have a major impact on the crop production system. The situation is not mild it is a serious issue,” she stresses.

Dr. Emmanuel Tachie-Obeng, a Principal Programme Officer at the Ghana Environmental Protection Agency, confirms to IPS that the rising temperature will fuel the production and spread of aflatoxins.

Tachie-Obeng says aflatoxins levels in maize may increase rapidly if not checked in areas such as Northern Volta, Central and Bono regions.

A solution that is not yet available to all

Last year, scientists at the International Institute of Tropical Agricultural (IITA) in collaboration with the United States Department of Agriculture – Agricultural Research Service and the Kwame Nkrumah University of Science and Technology developed and tested a bio-pesticide called Aflasafe that controls the fungi that produces aflatoxins in the soil.

Aflasafe is made from four non-aflatoxin producing  types of fungi native to Ghana, preventing crop infection, contamination, and reducing aflatoxins by between 80 and 100 percent.

Dr. Daniel Agbetiameh, Aflasafe Technical Advisor at IITA, tells IPS that the all-natural product is applied before crops are harvested and it displaces the aflatoxin-producing moulds by first occupying and then “colonising” the space these poison producers would otherwise occupy.

“With four kilos of Aflasafe, we can protect an entire acre of maize, groundnuts or sorghum. The result is increased farmer income, and better consumer health,” Agbetiameh notes.

He adds that aflatoxin management is a pipeline of events that starts from the farmer to the consumer so each actor needs to play their role in reducing levels of aflatoxins.

Frimpomaah, Adusah and Dabiali want the government to consider including Aflasafe on the list of inputs offered to farmers under its flagship programme Planting for Food and Jobs.

Until then, Dabiali says that smallholder farmers like herself, are “sweating for nothing”.