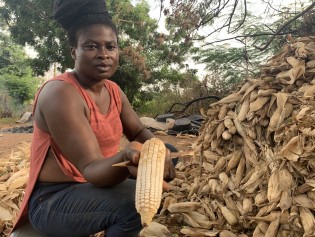 By Albert Oppong-Ansah
In the scorching Upper East Region of Ghana, the dry seasons are long and for kilometres around there is nothing but barren, dry earth. Here, in some areas, it is not uncommon for half the female population to migrate to the country’s south in search of work, often taking their young children with them.

By Albert Oppong-Ansah
It was 20-year-old Fizer Boa who first migrated south to Ghana’s capital, Accra, to work in the local Abobloshie market as a porter or “Kayayei”.

By Albert Oppong-Ansah
Smallholder farmer Suleman Mustapha Simbia, 40, is pleased with the introduction of an insurance initiative called the Ghana Agriculture Insurance Programme. The programme is being implemented in this West African nation to help farmers who had been suffering from loss of income as a result of the bad weather conditions that affect their yields.

By Albert Oppong-Ansah
It is a school day but 13-year-old Musah Razark Adams, a Grade 5 primary school pupil in Wuba, northern Ghana, is standing in a rice field wielding a “koglung” – a sling shot to hit birds with.

By Albert Oppong-Ansah
In order to ensure that he and his family survive this year's failed harvest, Adams Seidu, like farmers in other rural communities in Ghana’s Northern Region, has implemented a strategy for survival. They are using what Seidu calls the "one-zero-one strategy" for children, and the "zero-zero-one strategy" for adults.
ADVERTISEMENT ADVERTISEMENT