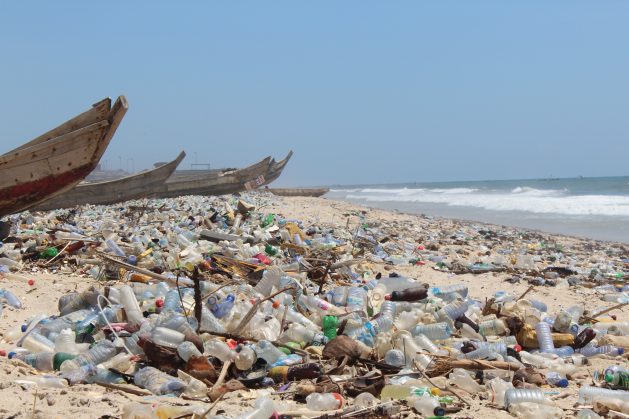 About 2.58 million metric tonnes of raw plastics are imported into Ghana annually of which about 73 percent of this effectively ends up as waste. Credit: Credit: Albert Oppong-Ansah/IPS

ACCRA, Dec 21 2018 (IPS) - Twelve-year-old Naa Adjeley lives in Glefe, a waterlogged area that is one of the biggest slums along the west coast of Accra, Ghana. The sixth grade student, his parents and three siblings use 30 single-use plastic bags per day for breakfast.

When they finish eating the balls of ‘kenkey’, fried mackerel, and pepper sauce, the plastic bags that the food was individually wrapped in are dumped into the river that runs through the slum, eventually ending up in the ocean, which lies a mere 50 metres from their home.

In one month, this family alone contributes over 900 pieces of single-use plastics to the five trillion pieces of microplastic in the ocean. This is because their community of over 1,500 households, which sits on a wetlands, does not have a waste disposal system.

So assuming that their neighbours also dump their waste into the river and that they consume similar amounts of plastics per day, this means they add over 1.3 million pieces of single-use plastics to the sea each month.

The situation is the same in all the other settlements that are close to degraded lagoons around the ocean.

With all of these being in different stages of development, according to a recent study by the People’s Dialogue on Human Settlements (PD) Ghana, a non-governmental organisation. Professor Alfred Oteng-Yeboah, Chair of the Ghana National Biodiversity Committee, recalls that 10 years ago food was packaged with leaves and women went to the market with woven baskets or cotton bags.

“Now because of civilisation, every food item or prepared food bought in this country is first wrapped in a single-use plastic and then is kept in plastic carrier bags. If Accra has a population of over 2.6 million and everyone uses a single plastic every day, just calculate how much plastic waste is generated per day,” he told IPS.

About 2.58 million metric tonnes of raw plastics are imported into Ghana annually, of which 73 percent effectively ends up as waste, while only 19 percent is re-used, according to the country’s Environmental Protection Agency.

Sadly, less than 0.1 percent of the waste is recycled, meaning all the plastic waste generated ends up in the environment.

John Pwamang, Executive Director of the Environmental Protection Agency, is worried about the discharge of plastics into the various lagoons, and ultimately in the sea. “The reckless manner in which we throw away waste has become the most insidious threat to the ocean today,” he told IPS.

“We have to keep reminding ourselves that we are fast reaching the point where there will literally be more plastics in the sea than fish. Our fishermen will agree with me as they already are experiencing it. They always have more plastics than fish in their trawls. I am inclined to believe that the situation in Ghana may be more dire than it would appear,” he said.

Dr Kofi Okyere, a Senior Lecturer at the Cape Coast University, says lagoons are home to diverse species. There are 90 lagoons and 10 estuaries with their associated marshes and mangrove swamps along Ghana’s 550-km coastline stretch.

“Although I cannot put precise statistical figures, most of the lagoons, especially those located in urban areas, have been heavily polluted within the last decade or two. The pollutants are largely domestic and industrial effluent discharge, sewage, plastics, aerosol cans and other solid wastes, and heavy metal contaminants (lead, mercury, arsenic, etc.) from industrial activities,” he told IPS. 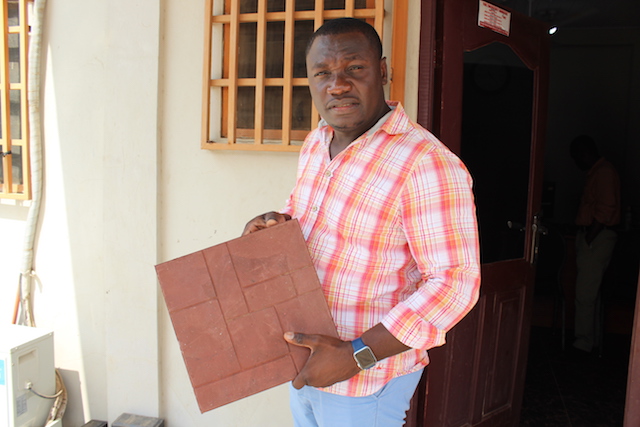 Nelson Boateng, Chief Executive Director of Nelplast Ghana Limited, is one of a group of people and companies that are finding alternative uses for plastic waste. He is holding a paving brick made from recycled plastic. Credit: Albert Oppong-Ansah/IPS

However, while a large number of Ghanaians are still using plastic, and discarding it, there are a few people and organisations that are putting the plastic to better use.

The company uses 70 percent sand and 30 percent plastic to manufacture the pavement blocks, but the ratio of the two materials changes depending on the kind of pavement project.

Walking IPS through the process in an interview, he explains the plastic waste is mixed with sand and taken through a melting process, and then the pavement slab is ready.

“So far we have paved many important areas, including residential areas, the premises of the Action Chapel, the frontage of Ghana’s Ministry of Environment Science, Technology and Innovation and some walkways in the country.”

“The advantage of plastic pavement blocks compared to the conventional cement blocks is that it is 30 percent cheaper, it does not break, there is no green algae growth, it does not fade. A square metre of our plastic paves cost GHC 33 (6.9 dollars) while the concrete cost 98 (20.20 dollars) I am doing this because I love the environment and I did all this on my own to beat plastic,” he said.

Currently, Boateng is recycling 2,000 kilos of plastic waste, but his factory, which is situated on a one-acre piece of land at the Ashaiman Municipal Assembly, has the capacity to produce 200,000 plastic pavement blocks.

Of the over 500 waste pickers who sell plastics to Boateng, 60 percent are women who depend on this as their livelihood. With the price of a kilo being 10 US cents women make a minimum of 10.40 dollars per sale.

Ashietey Okaiko, 34, a single mother and plastic picker of Nelplast Ghana limited, confirmed to IPS that she earns 31 dollars on average per sale, and that is what she uses to take care of her family.

“Because people now know that plastic waste is valuable, many women who are now employed are picking plastics. The company needs support to be able to buy more because sometimes when we send it they do not buy,” she says.

Boateng stated that pickers could collect up to the tune of 10,000 kilograms a day, saying, “I feel bad telling them I cannot pay due to financial constraints.”

Similar to Boateng’s innovation is the efforts of the Ghana Recycling Initiative by Private Enterprises (GRIPE), an industry-led coalition under the auspices of the Association of Ghana Industries (AGI), a non-governmental organisation, that is manufacturing modified building blocks out of plastic.

The initiative, carried out in conjunction with the Council for Scientific and Industrial Research, is pending certification by the Ghana Standard Authority for commercial use.

There are also other innovators such as Seth Quansah, who runs Alchemy Alternative Energy, which is converting plastic waste and tires through internationally approved and environmentally sound processes into hydrocarbon energy, mainly diesel-grade fuels.

Through the Ghana Climate Innovations Centre, and Denmark and the Netherlands through the World Bank, Quansah has received mentorship and is preparing to expand the company.

Ghana’s Minister of Finance and Economic Planning, Ken Ofori Atta, says the Ministry of Environment, Science Technology and Innovation (MESTI) is in the process of finalising a new National Plastic Waste Policy, which will focus on strategies to promote reduction, reuse, and recycling.

But Helen La Trobe, an environmental volunteer in Ghana, tells IPS, “African industry should seek innovative approaches to reduce plastic use and plastic waste in all its forms by replacing plastic with other innovative products and reducing, reusing and recycling where replacing is not currently possible.”

She also wants the government to provide adequate public rubbish bins at trotro stops (bus stops) and markets to have these frequently emptied.

She says plastic is indestructible and breaks into smaller and smaller parts, called microplastics, but it takes more than 500 years to completely disappear.

According to Trobe, microplastics and microbeads, tiny polyethylene plastic added to health and beauty products such as some skin cleansers and toothpaste, absorb toxins and industrial chemicals from the environment. As fish and other marine life ingest tiny pieces of plastic, the toxins and chemicals enter their tissue and then the food chain, which ultimately affect humans.

While Boateng does not believe that production of plastic is a problem, but that authorities need to support innovators and there is a need for a behavioural change, he adds, “The more the support, the cleaner the environment. If we are serious of ridding the country and the sea of plastics this is the way forward. When people go to the beach to clean up, the waste ends ups in the land field site, which is still in the environment.”