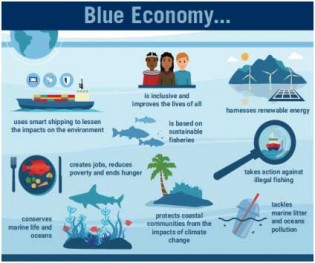 By Ruth Waruhiu
By efficient management, the sustainable exploitation of resources in oceans, seas, lakes and rivers—also known as the blue economy—could contribute up to $1.5 trillion to the global economy, according to the Organisation for Economic Cooperation and Development, an intergovernmental organization comprising of 36 countries.

By Busani Bafana
Fish will soon be off the menu, unless global leaders strike a deal ending multi-billion dollar harmful fisheries subsidies blamed for threatening world fish stocks and widening the inequitable use of marine resources.

By Lisa Stadelbauer
Throughout history, oceans, seas, lakes and rivers have provided life and livelihoods to people around the world. Today, they are a multi-trillion-dollar global economy supporting hundreds of millions of people and helping drive economic growth in all corners of the world.

By Mahawa Kaba Wheeler
The blue economy has quite rightly been described as the ‘New Frontier of the African Renaissance’. Its potential for a continent on which almost two thirds of its states have a coastline, whose trade is 90 percent sea-borne and whose lakes constitute the largest proportion of surface freshwater in the world, is enormous.
Next Page »
ADVERTISEMENT ADVERTISEMENT