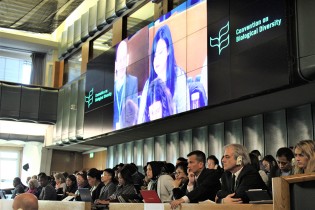 By Maged Srour
The Education Relief Foundation (ERF), jointly with the Republic of Djibouti, convened the III ForumBIE 2030 on Balanced and Inclusive Education On January 27-29 2020. This third ForumBIE 2030, with the overall aim to develop strategies for achieving the United Nations Sustainable Development Goal 4 (SDG 4) on inclusive and equitable quality education, concluded with the signing of the Universal Declaration on Balanced and Inclusive Education, which established a new international organization : 'Organization for Educational Cooperation'.

Climate Strike: Hundreds of Thousands Unite for the Planet’s Future

By Maged Srour
Friday, Mar. 15 saw hundreds of thousands of young people across the world take to the streets to join the climate strike. “We are demonstrating today for our planet and for our future. This is the place where we and those who come after us will live,” Jennifer, a 16-year-old girl from Rome, the Italian capital, who opted to join the protests, told IPS.

By Maged Srour
“The Italian and other European authorities are engaging – on the migration issue – in a policy which has the foreseeable results of numerous deaths.” It is a grim warning from expert on international law, refugees and migration issues, and member of the Global Legal Action Network (GLAN), Itamar Mann.

By Maged Srour
In Italy, over 400,000 agricultural labourers risk being illegally employed by mafia-like organisations, and more than 132,000 work in extremely vulnerable conditions, enduring high occupational suffering, warns the fourth report on Agromafie and Caporalato.

By Maged Srour
Debating on migration as an emergency is a huge mistake and treating it as such opens the door for illegal and unfair activities, says a migration expert.

By Maged Srour
As Yemen’s people struggle to survive amid what has been described as the world’s worst humanitarian crisis, the stranglehold by both government coalition forces and rebels over the country’s main ports of entry and distribution is cutting off a lifeline of support to 22 million people.

By Maged Srour
Even if arrivals of migrants into Italy by sea have decreased between 2017 and 2018 so far, recent events in the Mediterranean rim have strongly drawn attention to the migration issue and a fierce debate is now underway among European countries.
Next Page »
ADVERTISEMENT ADVERTISEMENT