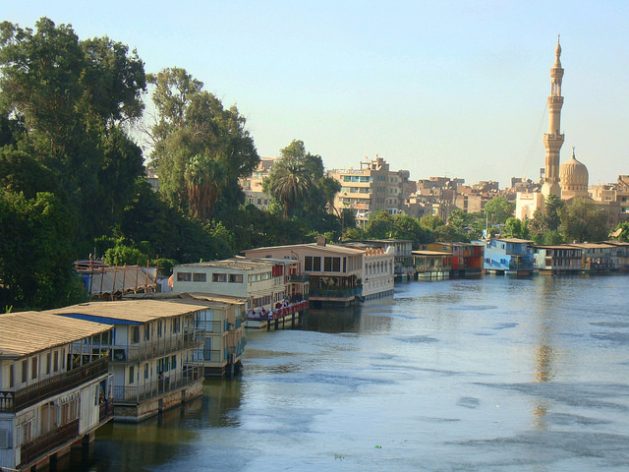 Houseboats line the Nile bank in Cairo. Some 85 million Egyptians depend on the Nile for water. According to the United Nations, Egypt is currently below the U.N.’s threshold of water poverty. Credit: Cam McGrath/IPS.

ROME, Sep 27 2018 (IPS) - Local residents in Cairo are becoming concerned and discontent as water scarcity is reaching a critical point in the capital and the rest of the country.

Although not all areas of the country are affected in the same way, many Cairo residents say they don’t have water for large portions of the day. And some areas are affected more than most.

“Where my grandmother lives, in a central area and near a hospital, water is almost never missing, but where I live with my family in a more peripheral area, water is missing several times during the week if not during the day,” one local resident from Cairo, who did not want to be named, tells IPS.

According to the United Nations, Egypt is facing an annual water deficit of around seven billion cubic metres and the country could run out of water by 2025, when it is estimated that 1.8 billion people worldwide will live in absolute water scarcity.

“The water goes away all the time, we don’t know how to handle this issue. The other day I even opened the tap and the water that came out was stinking of sewer,” the Cairo resident adds.

As highlighted in the ‘Egyptian Journal of Aquatic Research’, problems affecting the Nile River’s flow are many and range from inefficient irrigation to water pollution. In addition, the uncontrolled dumping of anthropogenic waste from different drains located along the Nile River’s banks has significantly increased water contamination to a critical level, warns the research. The pollution of the river—considered the longest river in the world—is an issue that has been underestimated over the past few decades. “Most of the industries in Egypt have made little effort to meet Egyptian environmental laws for Nile protection, where, the Nile supplies about 65 percent of the industrial water needs and receives more than 57 percent of its effluents,” the study says.

As so many people rely on the Nile for drinking, agricultural and municipal use, the water quality is of concern.

The reality is that the Nile is being polluted by municipal and industrial waste, with many recorded incidents of leakage of wastewater and the release of chemical waste into the river.

But Dr. Helmy Abouleish, president of SEKEM, an organisation that invests in biodynamic agriculture, says there is increasing awareness in the country about its water challenges.

“I can see the awareness towards the water insecurity challenge is now spreading in society more than before,” Abouleish tells IPS. “We all should be quite aware of the fact that whatever we are doing today, our children will pay for it in the future. None of the current resources will be available forever,” he adds.

SEKEM has converted 70 hectares of desert into a green and cultivated oasis north east of Cairo, which is now inhabited by a local community.

These futuristic innovations is what Egypt needs more of, considering that water availability is progressively worsening in the country.

“In Egypt rainfall is limited to the coastal strip running parallel to the Mediterranean Sea and occurs mainly in the winter season,” Tommaso Abrate, a scientific officer in the Climate and Water Department at the World Meteorological Organisation (WMO), tells IPS.

“The amounts are low (80 to 280 mm per year), erratic and variable in space and time hence rainfall cannot be considered a reliable source of water.”

“Climate models indicate that Egypt, especially the coastal region, will experience significant warming and consequent substantial drought by the end of the century, while rainfall is expected to show just a small decrease in annual means,” Abrate says.

He warns that other factors like abstraction (removal of water from a source) and pollution, have major effects on water quality.

Another concern is the fact that the country uses 85 percent of its water resources for agricultural activities—with 90 percent of this being used for conventional agriculture.

But agricultural wastewater, which carries the residual of chemical fertilisers and pesticides, is drained back into the Nile River.

It is a vicious cycle that is worsening the quality and the sustainability of Egypt’s farmlands. However, this year the Egyptian government and partners announced the allocation of about USD4 billion in investment to address the water shortage.

“Major efforts are being invested in the desalination of water from the Red Sea and the Mediterranean (for example the mega scale project in Ain Sokhna, which will purify 164,000 cubic litres per day). A regional centre unit will be established to follow water movement using the latest remote sensing techniques to combat this problem,” Abouleish adds.

SEKEM says that it is working to develop a “sustainable and self-sustaining water management system in all of Egypt.”

“We foster several research projects that are developed by the students and the research team at Heliopolis University to realise this mission. For instance, researching water desalination models from salt water, recovery systems for water from the air as well as waste water recycling systems is now considered in our core focus,” says Abouleish.

The U.N. agrees that in the next few years Egypt will face a water crisis of considerable size, which will require a more effective management of the available, scarce resources. This should involve a modernisation of the irrigation systems to avoid the current waste.

If water scarcity is not addressed by those accountable, there is a risk that in the coming decades, a country of nearly 80 million people could run out of water. It could result in a humanitarian crisis that would probably destabilise the entire Mediterranean region with unpredictable consequences.