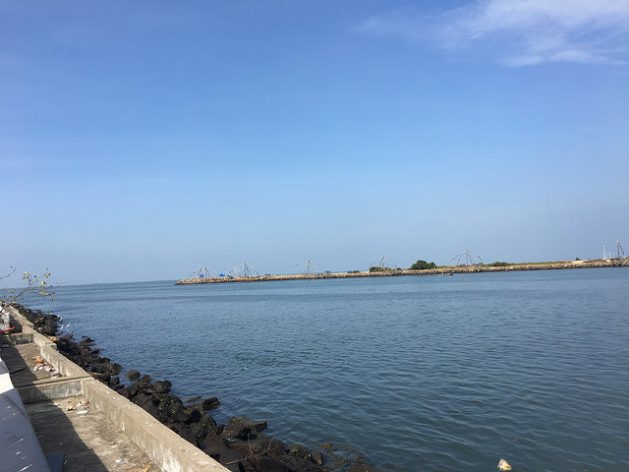 NEW DELHI, Mar 16 2018 (IPS) - As Cape Town inches towards ‘Zero Hour’ set for July 15, 2018, the real threat of water scarcity is finally hitting millions of people worldwide. For on that day, the South African city’s 3.78 million citizens — rich and poor, young and old, men and women — will be forced to queue up with their jerry cans at public outlets for their quota of 25 litres of water per day.

Who knew things would come to such a sorry pass for the rich and beautiful metropolis, ironically lapped by the aquamarine waters of the Atlantic and Indian Oceans? An ominous cocktail of deficient rainfall, devastating droughts and poor planning, say conservationists, have made Cape Town the first major city to run out of fresh water.

By 2040, there will be no drinking water in almost all of India.

The issue of water scarcity was first raised in the United Nations Conference on Environment and Development at Rio de Janeiro, Brazil, in 1992. Since then, each year, March 22 is observed across the world to shine the spotlight on different water-related issues. The theme for World Water Day this year is — ‘Nature for Water’ — Exploring nature-based solutions to the water challenges we face in the 21st century.

But even as the world is letting out a collective sigh for Cape Town, spare a thought for India. By 2040, there will be no drinking water in almost all of India. A UN report on water conservation published in March 2017 reveals that due to its unique geographical position in South Asia, the Indian sub-continent will face the brunt of the water crisis and India would be at the epicentre of this conflict.

By 2025, the report predicts, nearly 3.4 billion people worldwide will be living in ‘water-scarce’ countries and that the situation will become even more dire over the next 25 years.

With the planet’s second largest population at 1.3 billion (after China’s 1.4 billion), and expectant growth to reach 1.7 billion by 2050, India is struggling to provide safe, clean water to most of its populace. According to data from India’s Ministry of Water Resources, though the country hosts 18 percent of the world’s population, its share of total usable water resources is only 4 percent. Official data shows that in the past decade, annual per capita availability of water in the country has plummeted significantly.

If that isn’t scary enough, a glance at the World Bank’s latest statistics reveals the magnitude of the problem: 163 million Indians lack access to safe drinking water; 210 m have no access to improved sanitation; 21 percent of communicable diseases are linked to unsafe water and 500 children under age five die from diarrhoea each day in India.

In 2016, a whopping 300 districts (or nearly half of India’s 640 districts) were under the spell of an acute drinking water shortage across India. The government then had to operate special trains at great expense just to carry water to the affected places.

Surface water isn’t the only source reaching a breaking point in India. The country’s freshwater is also under great stress. This is largely because State policies have failed to check groundwater development. With continued neglect and bureaucratic mismanagement and indifference, the problem has intensified.

Grassroots efforts like those led by Rajendra Singh, who won the prestigious Stockholm Water Prize, presented annually by the Stockholm International Water Institute (SIWI), in 2015, have had a positive effect. His pioneering work in rural development and water conservation, starting in the 1980s, brought some 8,600 rainwater storage tanks, known as johads, to 1,058 villages spread over 6,500 sq km in nine districts of Rajasthan. Five seasonal rivers in the state which had nearly dried up have since become perennial.

But adverse fallouts from water shortage aren’t just limited to people. They impact the Indian economy too.

“As an agrarian economy, India relies heavily on agriculture. There is aggressive irrigation in rural areas where agriculture provides the livelihood for over 600 million Indians, However, technological advances in agriculture haven’t kept pace with the population explosion,” explains economist Probir Choudhury of Reliance Capital.

As a result, he says, even as much of the world has adopted lesser water-intensive crops and sophisticated agricultural techniques, India still uses conventional systems and water-intensive crops. An excessive reliance on monsoons further leads to crop failures and farmer suicides.

Wastage by urban population is already a great challenge in Indian cities. By far the greatest waste occurs in electricity-producing power plants which guzzle gargantuan amounts of water to cool down. More than 80 percent of India’s electricity comes from thermal power stations, burning coal, oil, gas and nuclear fuel.

Now researchers from the US-based World Resources Institute, after analysing all of India’s 400 thermal power plants, report that its power supply is under threat from water scarcity.

The researchers found that 90 percent of these thermal power plants are cooled by freshwater, and nearly 40 percent of them experience high water stress. The plants are increasingly vulnerable, while India remains committed to providing electricity to every household by 2019.

“A severe lack of regulation, over privatization and entrenched corruption are the salient reasons pushing the country to a water crisis,” says Dr. Chintamani Reddy, a water expert and former professor of geography at Delhi University.

Worsening the situation, adds Reddy, are regional disputes over access to rivers in the country’s interior. Clashes with neighbours — Pakistan over the River Indus and River Sutley in the west and north and with China to the east with the River Brahmaputra — have become increasingly common.

But it’s not all doom and gloom. Thankfully, some measures are underway to improve the scenario. Indian farmers are being sensitized about the latest irrigation techniques such as drip irrigation, and utilizing more rainwater harvesting to stem the loss of freshwater sources. Modern sanitation policies are being drafted that both conserve and prudently utilize water sources.

Massive investments in wind energy and solar energy, along with rejection of fossil fuel facilities in water-stressed places, are also being vigorously pursued. India has a target for 40 percent of its power to come from renewables by 2030 under the Paris Agreement on Climate Change.