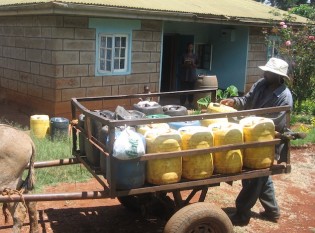 By Tharanga Yakupitiyage
As old and new challenges continue to threaten its access, the UN has dedicated the next decade in order to protect a crucial but fragile natural resource: water.

By Doug Brown
On World Water Day, March 22, universal access to clean water continues to be a privilege, when it should be a right. Experts predict that by 2030 the global water demand will exceed supply by 40%.

By Matthias Schmale
World Water Day (March 22) could not come at a more critical time for the people of Gaza who are facing a humanitarian catastrophe The recent decision by the United States to reduce funding for the United Nations Relief and Works Agency for Palestine Refugees in the Near East (UNRWA), jeopardizes its role as a critical source of clean drinking water when Gaza’s supplies slow to a drip.

By Torgny Holmgren
Going into World Water Day, I have an ambivalent feeling. This year’s theme The Answer is in Nature can sound almost like mockery considering how badly parts of the world have been hit in recent years due to water-related natural disasters, be it floods, storms or droughts.

By Yeonju Jeong
Freshwater makes up only 2.5% of all water we have on earth. Readily accessible freshwater – which is found in rivers, lakes, wetlands and aquifers – accounts for less than one per cent of the world’s water supply. It is vital for the existence of nearly every species on earth.

By Miroslav Lajčák
At the start of the seventy-second session of the General Assembly of the United Nations I emphasized our common goal: peace and a decent life for all people on a sustainable planet. Many leaders echoed this overarching priority at the general debate and beyond.

By Vladimir Smakhtin
“You cannot manage what you do not measure” is a long-familiar saying to many, nowhere more so than in professional water circles at almost every level.

By Ramu Damodaran
One of the first resolutions adopted by the United Nations General Assembly, on the location of the headquarters of the Organization, gives the United Nations “exclusive rights over the subsoil of land conveyed to it, and in particular the right to make constructions underground and to obtain therefrom supplies of water.”

By Sanjay Wijesekera
When disaster strikes, or conflict rages, families soon discover their most urgent need - water. In such precarious situations, access is usually limited or non-existent, and children and their families are forced to put themselves in further danger in the quest for water.

By IPS World Desk
The UN General Assembly will launch the International Decade for Action: Water for sustainable development (2018-2028) on World Water Day, 22 March 2018. According to UNGA President Miroslav Lajcak, outlining his priorities for 2018, the event will “contribute to the review of SDG 6” during the 2018 session of the UN High-level Political Forum on Sustainable Development (HLPF).

By Tharanga Yakupitiyage
“Water is life”—a slogan that arose from the anti-Dakota Access Pipeline movement is one that resonates not only in the U.S., but around the world as millions still lack access to clean, safe water.

By IPS World Desk
World Water Day on March 22nd gives us an opportunity to reflect on the one simple truth: water is life.

By Rudolph Cleveringa
I listened to a Haitian farmer share solutions with neighbouring water users on how best to allocate scarce water resources. I learned about the resolution of inter-village water conflicts after sitting in a longboat for hours on the Ganges Delta in Bangladesh. On the dry floodplains of Ethiopia, I heard how local solutions benefitted women and outperformed ‘imported’ ones.

By Baher Kamal
During the final exams of Spanish official high school of journalists, a student was asked by the panel of professors-examiners: If scientists discover that there is water in Planet Mars, how would you announce this news, what would be your title? The student did not hesitate a second: “There is life in Mars!” The student was graduated with the highest score.

By Manipadma Jena
In Asia, it likely will not be straightforward water wars.
Next Page »
ADVERTISEMENT ADVERTISEMENT