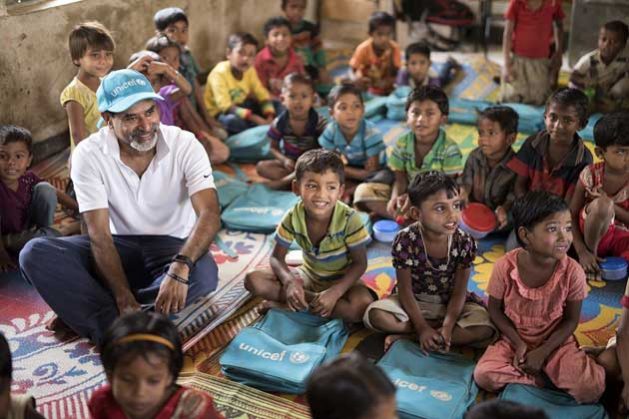 UNITED NATIONS, Mar 19 2018 (IPS) - When disaster strikes, or conflict rages, families soon discover their most urgent need – water. In such precarious situations, access is usually limited or non-existent, and children and their families are forced to put themselves in further danger in the quest for water.

During such times, water and sanitation experts are often the first responders to communities affected by conflict and natural disasters. They work to ensure safe access to water, which paves the way for other vital interventions such as health, nutrition, education and protection.

As a young engineer, I was deployed by an international aid agency to Rwanda in 1994 in the aftermath of the civil war and horrific genocide. I arrived in Kibeho in the wake of suffering and great loss: shallow graves on roadsides; blood-stained walls in the local church; the unmistakable smell of rotting flesh.

Amid the death and destruction, it was vital to focus on the immediate needs of the children whose lives remained at risk from malnutrition, waterborne diseases and diarrhea.

For those of us lucky enough to have easy access to drinking water and a functioning toilet – the lack of water, sanitation and hygiene (WASH) is not a major concern. But for the one in four children around the world who live in countries affected by conflict or disaster, it is an overwhelming preoccupation and a matter of survival.

In times of conflict, more children tend to die from diseases caused by unclean water and poor sanitation than from direct violence.

In Kibeho, children walked up and down steep hillsides to fetch drinking water from streams and unprotected springs polluted with human and animal feces. I remember meeting Aimee, an emaciated little girl, in a makeshift shelter made of branches and thatched with dried leaves. Aimee was malnourished, severely dehydrated, and in desperate need of medical attention. 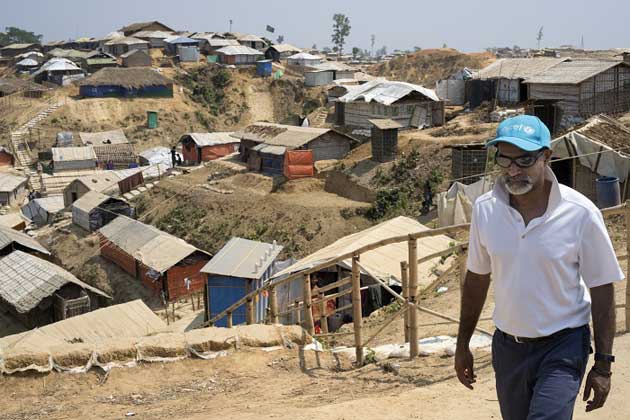 Sanjay Wijesekera, UNICEF’s global Chief of WASH, visits Kutupolong camp for Rohingya refugees in Cox’s Bazaar District, Bangladesh on 12 March 2018. Since an outbreak of violence began on 25 August 2017, more than 670,000 Rohingya people have sought refuge in neighboring Bangladesh. UNICEF and partners are working to provide for the needs of this enormous refugee population who will be all the more vulnerable during the upcoming monsoon and cyclone seasons. Credit: UNICEF

Despite her condition, she managed a smile as we hurried to get her the urgent medical care she needed. Her resilience gave fresh meaning to our job – to install a water supply in her village – which was a major camp for thousands of Rwanda’s internally displaced people.

I saw the same strength and resilience in Myanmar when I visited displaced populations of Rohingya in Rakhine state in 2013. The ground on which people pitched their tents – their makeshift homes – was low-lying and waterlogged.

The lack of sanitation and hygiene made living conditions not just unbearable, but a huge risk to life especially for children and their families living on hard-to-reach islands that were only accessible by boat.

Children, once again, were visibly malnourished and although UNICEF and partner organisations were providing water, children and families still had to walk long distances to collect it. It was an overwhelming task that called for commitment and persistence.

In the face of this adversity I was amazed by the great resilience demonstrated by women who described their shared care system which helped them cope with their difficult circumstances.

United by their loss and grief, households partnered with each other to cook, fetch water, gather firewood, care for children and tend to the sick. There was no complaining, no anger. Just hope, pragmatism, and a pooling of meagre resources.

Since the outbreak of violence on 25 August 2017, more than 670,000 Rohingya people have sought refuge in Bangladesh. During my visit, there this month, I was reminded yet again of the importance of maintaining the humanitarian response of providing safe water and sanitation to people affected by conflict while sitting with refugee children in a learning center in Kutupolong refugee camp in Cox’s Bazaar.

Their smiles and laughter were echoes of resilience that must be bolstered by those working to meet the needs of this enormous refugee population, particularly as the approaching monsoon and cyclone season brings with it health risks and hygiene challenges.

Over the past six years, I have witnessed the humanitarian response of delivering water, sanitation and hygiene in times of conflict and disaster. I’ve seen the profound impact it has for children who have lost so much and yet remain incredibly resilient.

We share the strength and determination of children like Aimee and the women and girls in Myanmar and Bangladesh, and we remain committed to preserving the rights of every child to water, sanitation and hygiene.

*UNICEF launched a fundraising appeal to support children and families affected by conflict and disaster globally. More than a fifth of the appeal will go towards UNICEF’s work on WASH. UNICEF is the leading humanitarian WASH agency in emergencies, providing over half of the emergency WASH services in humanitarian crises around the world.