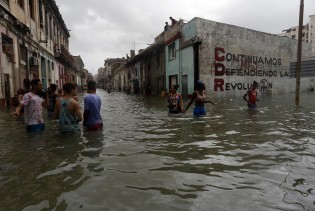 By Baher Kamal
“There are new challenges to all states: among them, the real threat to multilateralism... South-South and triangular cooperation can contribute to a new multilateralism and drive the revitalisation of the global partnership for sustainable development.”

By Martin Khor
The United Nations’ leading development organisation UNCTAD recently obtained a renewed mandate for its work, but not without difficulty. This is because the developed countries are now much more reluctant to give concessions to the developing countries, thus showing up the present shaky state of North-South relations and of development cooperation.

By Martin Khor
The last World Health Assembly (WHA) in Geneva (23-28 May) discussed the manifold global health crises that require urgent attention, and adopted resolutions to act on many issues. We are currently facing many global health related challenges, and as such multiple actions must be taken urgently to prevent these crises from boiling over.

By Roberto Azevêdo
There is a misconception, by some, that the World Trade Organization (WTO) is a barrier to regional integration. It is one of a number of misconceptions that do not match up with the facts like the perception that the WTO is a rich man's club. Today the WTO has 162 members and rising at all stages of development. 43 of those members are African countries and rising. The organization now covers around 98% of world trade. It is a truly global organization, one where everybody has an equal say. And it is an organization which supports regional integration in Africa. Indeed, I would say that the need for better integration across the continent is indisputable.

By Anis Chowdhury and Jomo Kwame Sundaram
Many well-meaning people believe that “good governance” is key to inclusive development. But research claiming that “good governance” is essential for rapid growth suffers from serious methodological or conceptual limitations. Existing definitions are extremely broad, suffer from functionalist tautology, or mainly refer to corruption.

By Mbom Sixtus-Yaounde
“They have reduced the quantity of food they used to give us and we still do not know why. But we are managing. We are refugees and we have no choice. All they give us is rice and some soya beans” John Guige, a Nigerian resident and primary school teacher in the Minawao refugee camp in Cameroon’s Far North region, told IPS.

By Miriam Gathigah
For two decades, Dickson Kamau only grew maize on his 0.5 hectare (ha) of land earning himself the nickname Kamau wa mbembe or Kamau who owns maize in his native Kikuyu language.

By Ignatius Banda
Sijabuliso Nleya has been kept busy in the past few weeks digging up sand. He is not a sand poacher like scores of people who local district councils across the country say are digging along dry river beds for sand used in the construction of houses. "The situation is terrible," said Nleya, who owns a plot in Douglasdale, a small farming community on the outskirts of Bulawayo.

By Pratyush Sharma
China’s strength in South-South Cooperation (SSC) lies in its carrying out big-ticket infrastructure projects in diverse developing countries. It is remarkable in terms of project scale, speed and cost-effectiveness and has been playing a positive role in promoting partner’s nation-building, economic development and social progress. However, the swift completion of China’s infrastructure projects also has its sets of problems like little or no paper-work leading to lack of transparency, oversight and post-project monitoring. The backlash against Chinese labourers employed by Chinese companies in developing countries has been routinely highlighted by the international media with allegations of skirmishes with the local population, corruption coupled with resource theft.
Next Page »
ADVERTISEMENT ADVERTISEMENT