Miroslav Lajčák, President of the 72nd Session of the UN General Assembly, in his address to the 41st annual ministerial meeting of the Group of 77

UNITED NATIONS, Sep 25 2017 (IPS) - When the Charter of Algiers was adopted 50 years ago, it marked the unity of the Group of 77. This unity has not wavered since then. 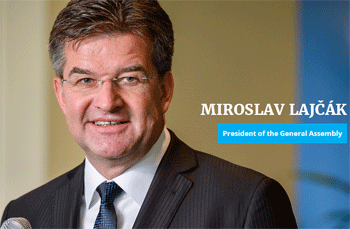 The G77 is the biggest group at the UN, made up of more than two thirds of Member States. It is also the most diverse– bringing together perspectives and priorities from across the world.

Today I want to focus on the key role played by the Group of 77 in strengthening our multilateral work. And I want to identify opportunities for stronger cooperation, as we head into the 72nd Session.

I will first point to the Group’s commitment to maintaining momentum around the 2030 Agenda and the Paris Climate Agreement.

These two frameworks involve big commitments. And big commitments need loud reminders to ensure they are met. The Group of 77 has spoken in a united voice. Over the past two years, it has worked to remind us all of the financial pledges made to humanity and to the planet. And I intend to add my voice over the coming year.

G77 members have also played a major role in promoting specific goals and issues. We have seen this through initiatives to mobilize youth for Sustainable Development. We will see this again, with the launch of the International Decade for Action on “Water for Sustainable Development” in 2018. And the Group’s commitment to combating climate change will be clear throughout COP23, which will be chaired by Fiji.

In addition, the Group has also acted as an import platform for south-south cooperation. I stand ready to support the preparation leading to the Second UN Conference on South-South Cooperation, to be hosted by Argentina in 2019

This focus on financing and partnerships is very much in line with the priorities of my Presidency. I intend to work with the Group of 77 throughout the coming year to identify opportunities for the sharing of ideas and lessons learned.

Second, I want to stress that an active G77 is crucial in other areas.

In 2018 the General Assembly will be charged with adopting Global Compacts for Refugees and Migrants. To succeed, we must focus on the needs of people, rather than our individual positions or ideologies. And we will need active engagement from the Group of 77.

Additionally, I will convene a High-Level Event on Sustaining Peace in April 2018. It will offer us an important opportunity to strengthen UN actions around peace and prevention. I intend to consult many G77 members as we work towards this event.

Finally, another opportunity for better cooperation lies in our collective goal for a stronger United Nations.

The 72nd Session will see UN Member States consider the reform agenda of the UN’s Secretary-General. This will apply to the UN development system, peace and security architecture, and management. I am committed to facilitating open and inclusive dialogue on reforms. The G77 will be a key partner in this process.

For the UN to carry out the mandates set by Member States, it needs adequate funding. We will need a timely agreement on the UN regular budget for 2018-2019. I commend the Group for its active engagement in this area.

But, more importantly, the Group can shed light on the needs and priorities of the people living in these countries.

Many of them are facing challenges. Some have experienced the devastating impact of Hurricane Irma and Maria. Others are dealing with the effects of terrorism, conflict, or drought.

These people, however, are also creating opportunities. They are working to mediate conflicts – start new businesses – and advocate for people and the planet.