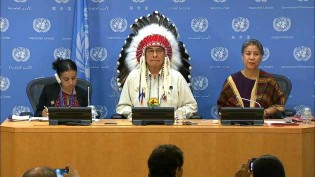 By Miroslav Lajčák
First, I want to talk about how we got here. It was nearly 100 years ago, when indigenous peoples first asserted their rights, on the international stage. But, they did not see much progress. At least until 1982 - when the first Working Group on Indigenous Populations was established.

Migration Should Not be Politicized, Warns General Assembly President

By Miroslav Lajčák
This week, we began intergovernmental negotiations on the Global Compact on Migration. Therefore, it has never been more important to have a fact-based discussion on this issue. To start us off, I want to make main three points. First, I want to stress that migration is a fact. It is not an idea. It is not a theory. It is not a trend. It is a fact.

By Miroslav Lajčák
When the Charter of Algiers was adopted 50 years ago, it marked the unity of the Group of 77. This unity has not wavered since then.
ADVERTISEMENT ADVERTISEMENT