This article forms part of the special IPS coverage of the Solutions Forum, a high-level conference of Small Island Developing States (SIDS) to be held Aug. 30-31. 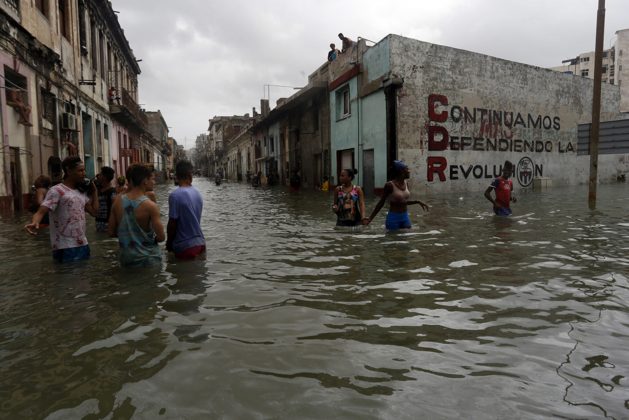 Local residents stand in the water on a street flooded by the sea in the Centro Habana municipality in the Cuban capital in September 2017 in the wake of Hurricane Irma, one of the most intense storms in recent decades in this Caribbean island nation. CREDIT: Jorge Luis Baños/IPS

HAVANA, Aug 25 2021 (IPS) - Cuba, already beset by hurricanes, floods, droughts that deplete its main water sources, among other natural disasters, has seen its socioeconomic difficulties, similar to those faced by other Caribbean island nations, aggravated by the COVID-19 pandemic.

Despite the complexity of its domestic situation, Cuba has offered its best health resources to small island nations in the region and more than a dozen of them have received Cuban medical brigades to help them face the emergency created by the pandemic.

With differences and similarities, the Caribbean region shares the fate of other Small Island Developing States (SIDS), which are particularly vulnerable to the impact of climate change but are responsible for only 0.2 percent of the carbon dioxide (CO2) emissions that cause global warming.

"For Cuba and the rest of the Caribbean island nations the greatest challenges in relation to the implementation of the 2030 Agenda involve the indispensable creation of measures for adaptation to climate change." -- Marcelo Resende

The SIDS will hold a Solutions Forum on Aug. 30-31, promoted by the United Nations Food and Agriculture Organisation (FAO) and sponsored by Fiji, to exchange experiences on how to move forward in the midst of the climate and health crisis towards achieving the Sustainable Development Goals (SDGs) in just a few more years.

The virtual conference is based on the premise that the 38 SIDS that are members of the United Nations and the other 20 associated territories, beyond their differences in size and development, share common challenges as island nations and can also share successful sustainable management initiatives that can be replicated in the other members scattered throughout the developing regions of the South.

“SIDS are characterised by unique development needs and extreme vulnerability. Frequent exposure to hazards and natural disasters intensified by climate change” negatively impacts Cuba, as well as the rest of the countries, FAO representative in Cuba Marcelo Resende told IPS.

He said this Caribbean country “has a lot of expertise and know-how in the integration of environmental sustainability, disaster risk management and climate change adaptation, so this exchange and transfer of knowledge will be positive.”

Cuba, the largest island in the Caribbean, faces increased frequency and intensity of extreme hydrometeorological events – not only tropical cyclones, but also drought, major floods, rising temperatures and sea level rise, which scientists currently project to reach 29.3 centimetres by 2050 and 95 centimetres by 2100. 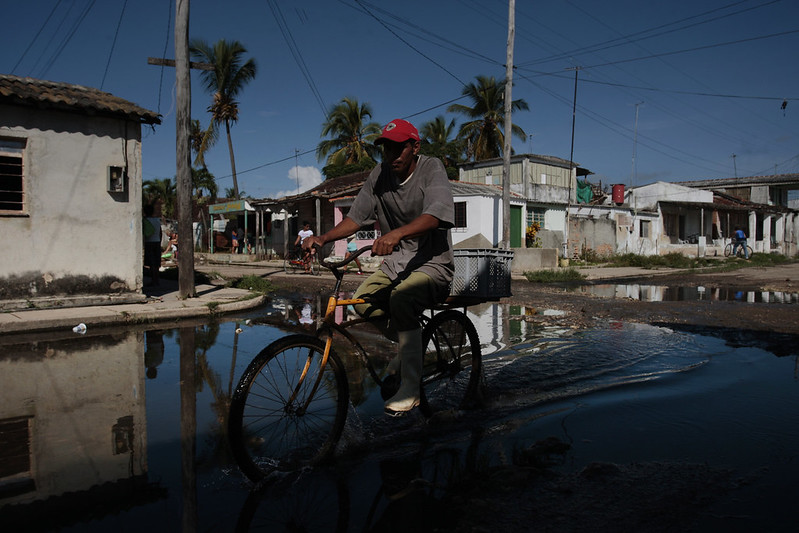 A man rides his bicycle along a flooded street in the town of Batabanó, in southern Mayabeque province in western Cuba, an area of low-lying, often swampy coastal areas prone to frequent flooding during hurricanes and heavy rains. CREDIT: Jorge Luis Baños/IPS

Of the country’s 262 coastal settlements, an estimated 121 are at risk from the climate crisis. Of these, 54 are located on the south coast and 67 on the north coast, almost totally impacted in September 2017 by Hurricane Irma, which reached winds of 295 kilometres/hour and became one of the most intense storms in recent decades.

A prevention system that involves everyone from the government to urban and rural communities makes Cuba one of the best prepared Caribbean nations when it comes to prevention and mitigation of risks in case of disasters, despite the generally substantial economic damages.

In addition to legal measures to prevent human activities that accelerate the natural erosion of areas bordering the sea and the relocation of vulnerable settlements, this year the project “Increasing the climate resilience of rural households and communities through the rehabilitation of productive landscapes in selected localities of the Republic of Cuba” (Ires) began to be implemented.

The “Coastal resilience to climate change in Cuba through ecosystem based adaptation – MI COSTA” project was also created. Both initiatives are supported by the Green Climate Fund, an instrument of the United Nations Framework Convention on Climate Change (UNFCCC).

In addition to boosting the resilience of rural communities and protecting coastal communities, both projects are aimed at generating information that will facilitate the scaling up of the use of ecosystem-based adaptation practices at the national level, and the model can be used in other island nations with similar conditions.

“The impacts that are already being felt today associated with climate variability and the country’s vulnerability imply a large economic burden, which is becoming even more critical given the limitations and difficulties in accessing international financing,” said Resende.

The FAO representative noted that according to the executive secretary of the Economic Commission for Latin America and the Caribbean (ECLAC), Alicia Bárcena, Caribbean SIDS will not achieve the sustainable development committed to in the 2030 Agenda if they fail to find effective ways to adapt to climate change.

“This means that for Cuba and the rest of the Caribbean island nations the greatest challenges in relation to the implementation of the 2030 Agenda involve the indispensable creation of measures for adaptation to climate change,” Resende stressed. 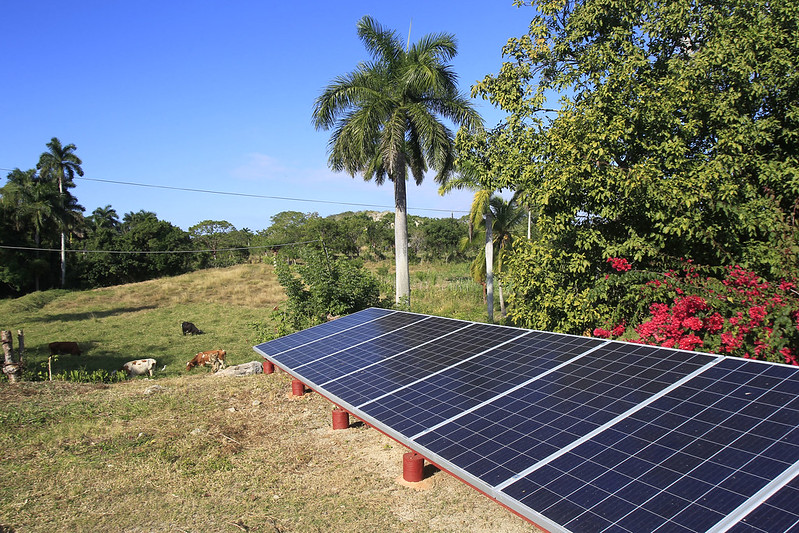 A row of solar panels on La Finca Vista Hermosa farm in Guanabacoa, one of Havana’s 15 municipalities, represents one of the small energy innovations that are part of the responses by some farms in Cuba aimed at making their production more sustainable. CREDIT: Jorge Luis Baños/IPS

Improving sustainability, resilience and nutrition-based approaches to food systems, strengthening enabling environments for food security, as well as empowering people and communities for these strategies are also important challenges.

In this regard, Resende said that “Cuba is impacted by the steady degradation of its natural resources for food production (soil, water and biodiversity), and faces difficulties in the current context for the production, transformation and conservation of food,” which has repercussions on the instability of the physical availability of products in the markets.

For this island nation, which imports most of the food it consumes, these impacts are a challenge, “so the authorities are promoting an agenda of transformations and improvements in terms of supply and inclusive, sovereign and sustainable food systems, in compliance with the 2030 Agenda and as a priority that the country will face in the immediate future and beyond,” he said.

In July 2020 the Cuban government approved a National Plan for Food Sovereignty and Nutritional Education, which identifies as fundamental pillars the reduction of dependence on food and input imports, various intersectoral actions to bolster local food systems, and the mobilisation of educational, cultural and communication systems to strengthen food and nutritional education.

According to the objectives of the Global Action Programme on Food Security and Nutrition in Small Island Developing States, food systems should support local and family production, while providing a sufficient quantity of varied and nutritious quality food for their population, at a reasonable cost.

This transformation can help curb SIDS dependence on imports, as well as promote healthy eating and reduce obesity. 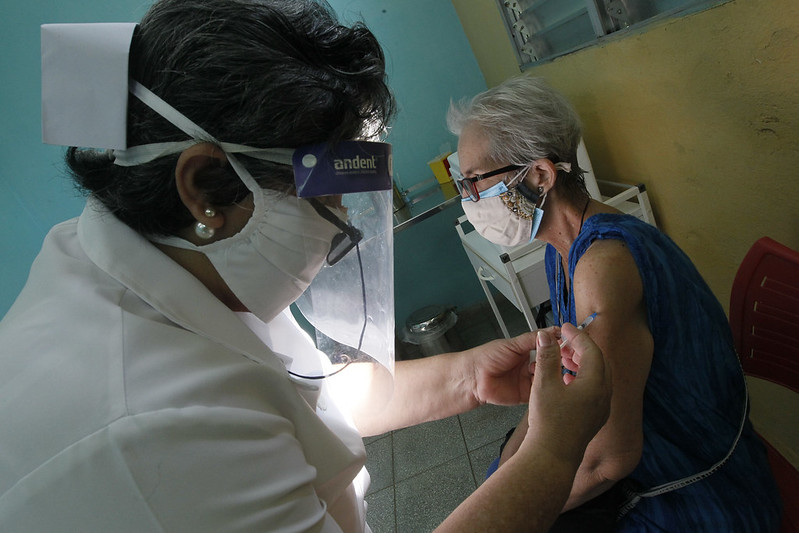 A patient receives the third dose of the Abdala anti-COVID vaccine at a hospital in Havana. Cuba has developed three vaccines against the coronavirus that could be used in other Caribbean island countries once all the steps for their international use have been completed. CREDIT: Jorge Luis Baños/IPS

The resurgence of COVID

The resurgence of the COVID-19 epidemic since late 2020 exacerbated the tension in Cuba’s weakened economy, which had to devote more resources to its hospital system, overwhelmed by the higher number of infections. However, Cuba already has three vaccines of its own: Abdala, Soberana 02 and Soberana Plus.

Authorities on the island have reaffirmed that the national biotechnology industry is in a position to produce by the end of 2021 at least 100 million doses of the vaccines, with which it intends to immunise the entire Cuban population before the end of the year as well as offer them to neighbouring countries, such as other Caribbean SIDS.

As of August 20, 27.8 percent of the island’s 11.2 million inhabitants had received the required three doses of one of the three locally produced vaccines.

On Aug. 11, the director of the Pan American Health Organisation (PAHO), Carissa F. Etienne, said that in the Caribbean, COVID cases have been on the rise in the Bahamas, Cuba, Jamaica, Martinique, Puerto Rico and Dominica – all members of the SIDS with the exception of Puerto Rico.

“In the last month, infections increased 30-fold in Martinique and there was a significant increase in hospitalisations,” she said.

Etienne announced that PAHO would use its Revolving Fund to help countries in the Latin American and Caribbean region acquire sufficient vaccines to curb the spread of COVID-19, on top of the assistance offered by Covax, a global mechanism to support the development, manufacture and distribution of vaccines.

The pandemic has severely impacted tourism, which many Caribbean economies and SIDS in general depend on. According to official figures Cuba’s tourism revenues fell in 2020 to 1.15 billion dollars – a 56.4 percent drop from 2019.

In addition to domestic problems, the tightening of the U.S. embargo is seriously hampering the Cuban economy, which shrank two percent in the first half of this year, after a 10.9 percent decline in 2020. Recovery will depend on curbing the epidemic and the rallying of the tourism industry.

(With reporting by Luis Brizuela from Havana.)