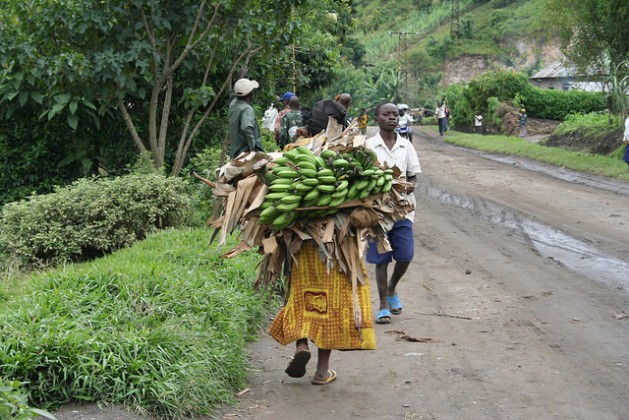 Africa is not trading enough with Africa to boost economic development, but a new free trade area could change all that. Credit: Busani Bafana/IPS

BULAWAYO, Zimbabwe, Sep 9 2016 (IPS) - Getting just a sliver of the global trade in goods and services worth more than 70 trillion dollars, Africans have every excuse to decide to trade among themselves.

Many argue that it is the only way to leverage trade to secure a better life for the continent’s more than a billion people who need food and jobs.

The Africa rising narrative might be getting the much needed validation to tackle widening inequality, joblessness, generalized poverty, food and nutritional insecurity that eclipse successes in meeting some of the development targets included in the newly agreed Sustainable Development Goals (SDGs).

A rich but poor Africa

The narrative of a poor Africa is about to change. That is, if Africa stands together as much as it did in fighting for its political independence. This time the fight is for a place on the global trade stage. After years of negotiations and the establishment of several free trade blocs, the signing of the Continental Free Trade Area (CFTA) agreement targeted for December 2017 could set Africa on a new development path.

The three regional economic communities have a combined GDP in excess of 1.3 trillion dollars and a population of 565 million. However, the TFTA, which has been signed by 16 of the 26 member countries, is yet to be ratified to come into force, a blow for the journey to the CFTA.

In their paper on the adoption of the TFTA, Calestous Juma, Professor of the Practice of International Development and Director of the Science, Technology, and Globalization Project at the Belfer Center for Science and International Affairs at  Harvard University, and Francis Mangeni, COMESA Director of Trade, Customs and Monetary Affairs, view regional trade as part of a broader strategy for long-term economic transformation.

They argue that African trade integration measures combine the facilitation of free movement of goods and services, investment in infrastructure, and promotion of industrial development as part of the long-term political vision to unleash the continent’s entrepreneurial potential through regional trade culminating in the African Economic Community by 2028. Global trade is an undisputed source of economic development and a decider between the rich and the poor as it facilitates wealth creation and spurs innovation in every sector.

According to United Nations Conference on Trade and Development, global trade is on the rise but developing countries, many in Africa, account for a small share of this global commerce. Foreign direct investment has gone up in Africa from 9 billion dollars in 2000 to 55 billion in 2014, but rich countries have benefitted more, a situation the first target of the expired Millennium Development Goal 8 sought to address through the development of an open, rule based, predictable and nondiscriminatory trading and financial system.

While an equitable trade system is a global ideal, Africa has the potential to turn the trade tide in its favour by transforming political will into action. Africa has a wide range of natural and mineral resources making beneficiation industries a viable investment option that will help cut unemployment and eliminate poverty which dog many countries in Africa.

“The proposed Continental Free Trade Area will expand the continent’s regional investment to West Africa which is currently not covered by the tripartite consolidation of COMESA, EAC and SADC,” Juma told IPS. “This will enlarge investment opportunities for Africans to invest across the continent. A larger continental market will also make African more attractive to foreign investors.”

Juma, who is writing a book on the CFTA to be published to coincide with signing of the agreement in 2017, believes that a larger single market will enable African factories to operate at full capacity, which will in turn stimulate greater technological innovation.

“The impact on innovation will include greater movement of skills to the continent from outside and across the continent between countries. Africans will be able to learn new skills from their foreign counterparts which will help to strengthen the continent’s technological base,” he said.

Africa has as many trade opportunities as it has obstacles to realizing the free movement of goods, services and people. One of the major obstacles to the CFTA identified by Juma is adjusting national laws and practices to enable countries to implement the agreement. Resistance will come from firms that have been previously protected from external competition. A solution, Juma is convinced, lies in balancing corrective measures with incentives.

“The agreement needs to include remedies and incentives that help countries to adjust to the new regime,” he said. “In this regard, the agreement should not be about free trade but it should also have provisions for infrastructure and industrialisation. It should be an economic development agreement, not just a free trade arrangement.”

Africans not trading with Africans

Statistics from COMESA indicate that inter-Africa trade is a paltry 12 percent compared to trade with Europe and Asia, at nearly 60 percent. At the heart of the poor intra-African trade are prohibitive national trade measures. It is easier to buy products from Europe than for African countries to sell to each other.

Trade policy harmonisation and reducing export/import duties are critical to freeing the movement of goods and people. Last month, the African Union launched the electronic Pan African passport, paving the way for free movement across borders and an important step towards a free trade zone. The passport, initially for African heads of state, foreign ministers and diplomats, will be available to African citizens by 2018.

African governments under the African Union have established the Continental Free Trade Agreement Negotiating Forum which has met several times to hammer out modalities of the continent wide free trade zone mooted in 2012. African Union Commissioner for Trade and Industry, Fatima Haram Acyl, told the first meeting of the negotiating forum in February 2016 that the Continental Free Trade Area will integrate Africa’s markets in line with the objectives and principles of the Abuja Treaty.

It remains for Africa to up investments in road, rail and air infrastructure, communications and seamless service delivery and agriculture which are disproportionate among the 54 member states creating unease as to what a single market will mean for both poor and rich economies.

Economic disparities present a hurdle Africa must overcome as many of Africa’s 54 countries are small, with populations of less than 20 million and economies under 10 billion dollars. National markets would be insufficient to justify investments as adequate supply of inputs and sufficient demand would be too expensive or out of reach that a bigger market will achieve.

The consulting firm McKinsey predicts consumer spending in Africa will rise from 860 billion dollars to 1.4 trillion by 2020, potentially lifting millions out of poverty should a single market be inaugurated.

The United Nations Economic Commission for Africa (UNECA) has calculated that the CFTA could increase intra-African trade by as much as 35 billion dollars per year over the next six years.

Concluding CFTA negotiations this year in good time for the 2017 deadline could open a new chapter in African trade and chart a new path towards economic independence and growth. The only question that remains is, will it happen?