Maria Andrade, a plant breeder at the International Potato Centre, is among the four winners of the 2016 World Food Prize. She is a member of AGRA’s Board. 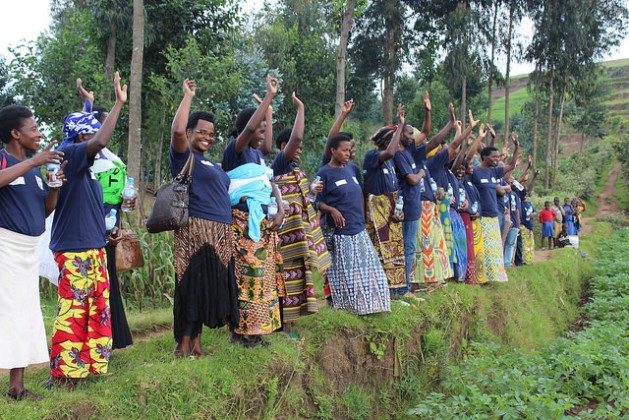 NAIROBI, Kenya, Sep 6 2016 (IPS) - Africa is a continent where, at least outwardly, we like to celebrate our diversity—the rich variety that can be found in our many cultures, languages, fashions, flora and fauna. That’s why it’s perplexing to see such a large segment of the African population depending on a very small number of food crops, like maize, rice and wheat.

And it’s more than just boring to the palate. It’s severely diminishing the quality of our diets and making our farming systems more vulnerable, especially during severe droughts like the one that hit Southern Africa this year.

I’ve learned from my work with sweet potatoes that we can turn Africa's “Cinderella crops” into the belle of the ball.

Meanwhile, there has been a lot of talk lately about how Africa’s agriculture sector is primed to become a new economic engine for a continent that has become too dependent on commodities like oil. This week, Heads of State and top officials from across Africa and around the world are coming to Nairobi for the African Green Revolution Forum, where there could be millions of dollars in new commitments for Africa’s smallholder farmers.

But Africa is unlikely to achieve its agriculture potential, or be prepared to deal with challenges like drought that climate change will make more frequent, unless we change our thinking about crop diversity.

For the last two decades, my work has revolved around developing and promoting nutritionally enhanced sweet potato. It has convinced me that, with the right approach, farmers will cultivate a wider variety of crops and consumers will embrace the new additions to their dinner table.

Africa is actually blessed with a wealth of crop diversity. Much of it – including sorghum, yam and cowpea – is native to the continent. But many other crop types have arrived via trade, like banana, pigeon pea and wheat from Asia, and beans, cassava and maize from the Americas. But rather than capitalize on this full basket of food options, we’ve bet too heavily on just a few crops.

Take the case of maize in Eastern and Southern Africa. Yes, it can grow in different farming environments and supply large amounts of calories. But the crop has weaknesses. It’s susceptible to drought and pests and its nutritional quality is mediocre.

And while recent research has delivered more resilient and nutritious maize varieties, these are not sufficient. The fact remains that in many regions, rising temperatures and increasingly erratic rainfall will cause maize yields to fall—by up to 22 percent in many areas and up to 60 percent in South Africa and Zimbabwe, according to a 2015 report from the Montpellier Panel.

There is a strong body of research showing that farmers are much less likely to suffer catastrophic losses from pests, disease or drought if they plant a broader array of crops. Today, the devastation caused by outbreaks of lethal necrosis in maize and stem rust in wheat is greatly intensified by the lack of alternative crops. In Malawi, while drought ruined maize and bean crops this year, farmers growing naturally hardy, nutritional crops like chickpea and sweetpotato fared much better.

If the benefits are so clear, then why don´t farmers just spontaneously diversify? The answer is that they may want to diversify, but often don’t due to policy and institutional barriers. When crops like maize started to dominate, governments and the private sector accelerated their take-over by providing subsidies, research and other support.

Meanwhile, other potentially useful crops like cassava and sorghum were neglected, sometimes acquiring derogatory labels like the “poor man’s crop” or “crop for marginal lands.”

It doesn’t have to be this way. I’ve learned from my work with sweet potatoes that we can turn Africa’s “Cinderella crops” into the belle of the ball.

First, we need research that is focused on adding value to these crops and further enhancing their already natural resilience. In the case of sweetpotato, we bred for higher levels of beta-carotene (the chemical precursor of vitamin A), better drought tolerance and virus resistance.

A second critical task: farmers need a reliable source of healthy seed. This is not easy for crops typically ignored by local and multinational seed companies, especially if they are propagated with bulky and perishable plant parts like sweetpotatoes. For sweetpotato, we worked through local farmer networks and international non-governmental organizations (NGOs) to achieve large-scale multiplication and dissemination of improved planting material.

Finally, marketing and branding, not something that comes naturally to researchers like myself, have to be part of the picture. We employed a variety of marketing and communications tools to make consumers aware of the many benefits of the sweetpotato – as a staple food, animal fodder, snack and ingredient in processed foods.

The theme for the upcoming African Green Revolution Forum is “Seize the Moment” and I can’t think of a better time for influential leaders attending this meeting to make crop diversity a central part of their plans for African agriculture. Just as many will admire the colorful dress of West African attendees, they should also be embracing a larger mosaic of food crops for our farmers. I’ve already seen the good things that happen when a big colorful splash of orange-fleshed sweet potato is added to African farms and African diets.