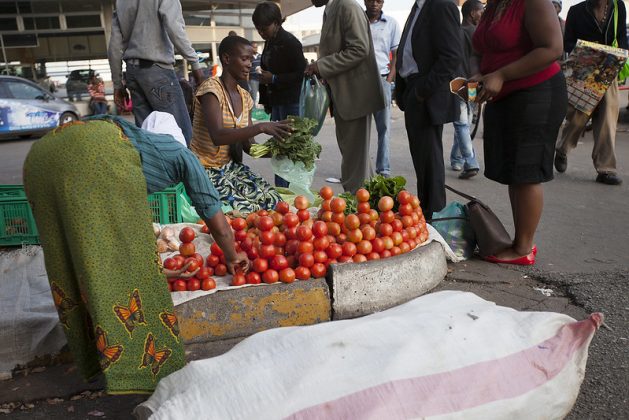 Zimbabwe needs urgent economic and political reforms to transform its economy amidst a growing national crisis, researchers say as more than 7 million Zimbabwean are food insecure owing to a projected 50 percent fall in the 2019 cereal harvest. Credit: Jeffrey Moyo/IPS

The country has been reeling from one of the worst droughts in decades, with the United Nation’s World Food Programme (WFP) identifying Zimbabwe as one of the 15 critical emergencies around the world at risk of crisis without rapid intervention.

“As a reform strategy, the CwA framework has the potential to support Zimbabwe’s economic transformation agenda,” the study published last week by the South African Institute of International Affairs (SAIIA), an independent public policy think tank, stated. It further noted that the compact was relevant to Zimbabwe’s re-engagement agenda and the Transitional Stabilisation Programme (TSP), which was introduced in 2018 as a blue print to turn around the economy.

But a crisis of governance and financial stewardship has long been stalking Zimbabwe, a Southern African nation that was once a model of economic success and democracy in Africa. Life has become difficult for its citizens who have to battle with a high cost of living and many things are in short supply from water to electricity to monetary currency, jobs, food and even political freedoms.

The report pointed out that Zimbabwe’s economic woes are multi-faceted — a result of a combination of factors, including economic mismanagement, chaotic land reform, indigenisation policies, political instability and fiscal mismanagement driven by corruption.

Yet despite its relevance, the compact has failed to raise enthusiasm among Zimbabwean policymakers, and few economic stakeholders are aware of it, the study found, pointing out that the Zimbabwe government is desperate and preoccupied with finding a quick solution to the economic crisis.

The study also made a note that there is no reform culture among the custodians of reforms in Zimbabwe.

Besides, the country’s multilateral debt, estimated at over $8,2 billion, has prevented any potential inroads with the international organisations involved with the compact.

“Clearance of multilateral debt arrears: the sanctions rhetoric seems to have taken the centre
stage ahead of reform implementation,” noted the study, adding that, “This behaviour has promoted corruption and stands in the way of reforms; hence there is no CwA for Zimbabwe.”

Economic analyst, John Robertson, said nobody agrees with the government on the point of economic sanctions imposed by the Western countries on individuals accused of human rights abuses in Zimbabwe.

“The sanctions are not applied to the country; the sanctions did not cause the country’s failure. The failure is caused by our decision to close down our biggest industries,” Robertson told IPS, referring to the destruction of the agriculture sector and the collapse of the manufacturing sector.

“The policy choices that we made have caused so much damage to our productive sectors starting with agriculture,” said Robertson, adding, “We imposed upon ourselves a serious handicap when we said the land in the country no longer has market value land so [people with] land can no longer borrow against ownership rights to that land because the land is now the property of the state.”

David Moore, researcher and political economist at the University of Johannesburg, told IPS that if the ruling Zimbabwe African National Union – Patriotic Front (ZANU PF) party had maintained its neo-liberal and white-farmer-friendly economic promises it might have kept the “west” on its side.

But cabals and corruption cannot be dismantled – they are the pillars of the party, he said. And so the military-party complex so tight that it cannot be untied: they are integral parts of the country’s political economy.

Academic and social commentator, Rudo Gaidzanwa, concurred saying it will take pushing to get ZANU (PF) ruling party and its military allies to undertake political and social reforms.

“The types of political and economic reforms that the civilians want will undermine the interests of the militarist elements in the state and the security sector,” Gaidzanwa, a Sociology Professor at the University of Zimbabwe, told IPS.

“ZANU won’t stand for anything that undermines their hold over the state and the society. It is not likely that any meaningful reform will occur unless dramatic social and political changes occur in Zimbabwe,” she said, adding that the ZANU PF led-government and elites have used economic sanctions as a convenient excuse to evade responsibility for economic and social crises.

Sanctions have not prevented the president and his cohorts from pillaging mineral resources. The current chaos was ideal for pillaging resources and undermining the rule of law and democracy, she said.

“Rigged elections are an issue because they prevent the will of the people from prevailing,” Gaidzanwa told IPS. “The present situation over contested presidential elections between (Nelson) Chamisa and (Emerson) Mnangagwa is symptomatic of that struggle…These issues have dogged our elections for decades and remain unresolved hence our dire economic and political situation.”

Economist and former parliamentarian, Eddie Cross sees the situation differently, saying Zimbabwe, despite its current challenges, has a good start to turn around its economic fortunes.

“We have a fiscal surplus, government salaries are down to a third of the budget from over 95 percent, we have a balance of payments surplus and nearly $1 billion in bank accounts,” Cross said, adding that Zimbabwe’s domestic debt has been devalued and exports are highly profitable.

“[Political] Stability is no longer an issue – it’s a done deal, what is a problem is financing and this is going to be a challenge because we really have to look after ourselves,” Cross, a member of the Reserve Bank of Zimbabwe’s Monetary Committee, told IPS in an interview. “A couple of billion dollars would be useful. Perhaps we can persuade Mrs. [Grace] Mugabe to bring some money back from abroad.”

Cross believes Zimbabwe can benefit from the G20 CwA even though the country is a pariah state.

“I think Brexit is important and also the IMF and if we play our cards right and get on with reforms I see no reason why we cannot be in a very different place in 2021.”