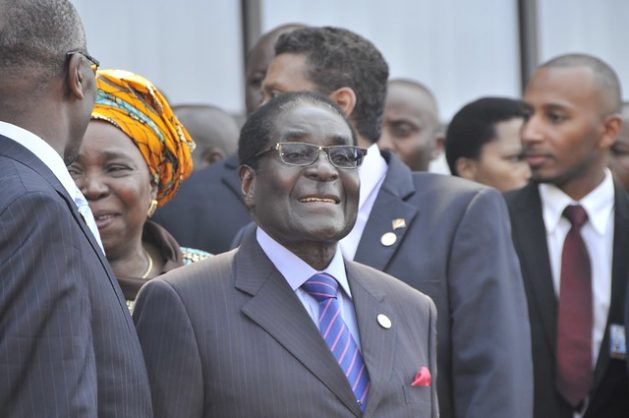 Former Zimbabwean President Robert Mugabe in 2013 pictured here at a Southern African Development Community heads of state summit in Malawi where he was given a standing ovation. Mugabe died of an undisclosed illness on September 6, 2019 in Singapore. Credit: Kervin Victor/IPS

Mugabe – the oldest African leader when he was removed from power in November 2017 – died of an undisclosed illness in a hospital in Singapore on Sept. 6.

Once a revered hero who liberated Zimbabwe from the brutal colonial rule in 1980, Mugabe ruled the country for 37 years before he was deposed in a military coup in 2017. Mugabe’s once-trusted comrade and enforcer, who later turned foe, Emerson Mnangagwa, became president in a 2018 election which was disputed by the opposition.

Describing Mugabe as the iconic leader of the struggle for national liberation, Mnangagwa paid a glowing tribute to Mugabe who sacked him as vice-president in 2017.

“A pan Africanist fighter, Comrade Mugabe bequeaths a rich an indelible legacy of tenacious adherence to principle on the collective rights of Africa and African(s) in general and in particular the rights of the people of Zimbabwe for whom he gave his all to help free,” Mnangagwa said in tribute broadcast hours after he confirmed Mugabe’s death on his official twitter account.

The fighter Mugabe was known for many things, including securing and protecting his own hold on power after he became the country’s Executive President in 1987, the same year he forged an uneasy unity accord between the country’s main political parties, the Zimbabwe African National Union Patriotic Front  (Zanu PF) and the Patriotic Front Zimbabwe African People’s Union (PF Zapu).

“There is no doubt that Robert Mugabe will go down as a colossus in Zimbabwean history,” David Coltart, former Education Minister and human rights activist, told IPS.

“He has a remarkable impact on Zimbabwe both positively and negatively and his positive legacy is that he fought a bitter struggle with Joshua Nkomo to end white minority rule that will be an enduring legacy. The other positive legacy is he expanded a quality education to all Zimbabweans and he must be given credit for that. He built on the legacy of Garfield and Grace Todd from the 1950s and expanded education.”

Coltart concedes to Mugabe’s less than illustrious legacy, noting that Mugabe perpetuated the violence of the former minority white Rhodesian Front government by disrespecting the rule of law and constitutionalism, growing corruption, abuse of office and the destruction of the Zimbabwean economy which forced hundreds of thousands to leave this southern African nation.

“History will tell on balance whether his legacy is more positive than negative,” Coltart said. “There is no doubt he was revered within Zimbabwe and revered throughout Africa. Indeed one could argue that he was more popular in the rest of Africa than he was in Zimbabwe himself. There is no doubt he mellowed in the final few years of his life, he mellowed in the inclusive government and reached out to the [opposition] MDC [Movement for Democratic Change] and the country settled to a certain extent and the country grew.”

“As Education Minister I worked well with him and we had a good functional relationship and we managed to stabilise the education sector and get it on a growth trajectory again, but of course during that period corruption continued to flourish in the country and after 2003 he allowed corruption to continue and allowed the constitution to be breached in the many ways that it was,” he said.

From liberator to dictator

Praised as a nation builder at independence when he extended the hand of reconciliation across the racial divide, Mugabe was not only a political liberator per se. He sought to liberate his country from poverty too, promoting investment in education, social welfare, industrialisation and food security.

In 1998, Mugabe was awarded the 100,000-dollar Africa Prize for Leadership for the Sustainable End of Hunger given by the Hunger project, a New York global aid organisation in recognition of his stewardship in Zimbabwe’s agriculture success story. The country’s agricultural programmes were praised for having ”pointed the way not only for Zimbabwe but for the entire African continent in fighting against hunger”, the organisation had said at the time.

Tragically, Zimbabwe is today no longer the food security champion in part as a result of its well-meaning but poorly executed land reform programme in 2000.

But Mugabe was a gifted orator with a quick wit and memorable sound bites. The fight for land and self-rule became hallmarks of this tenure.

“We fought for our land, we have fought for our sovereignty, small as we are, we have won our independence and we are prepared to shed our blood…so Blair keep your England and let me keep my Zimbabwe. We are still exchanging blows with the British government,” Mugabe once said in a famous spat with the then British Prime Minister Tony Blair.

David Moore, researcher and political economist at the University of Johannesburg, said Mugabe manipulated the very deep factions and divisions both in Zimbabwean society and the political system to his advantage, starting from the formation of Zanu PF in 1963. Mugabe, Moore told IPS, had a knack of getting people to do his dirty work and finding allies when he was in trouble. For example, Mugabe made alliances with the war veterans in 1997 that pushed him onto the fast track land reform and triggered an economic meltdown that the country has battled to recover from.

“We cannot forget the Gukurahundi where he destroyed a political party and ended up with almost a genocide evolving from that, so l mean anybody who says he is a hero is really missing the point,” said Moore. Gukurahundi is remembered as a series of massacres on civilians and members and officials of Joshua Nkomo’s Zapu that were carried about by the Zimbabwe National Army.

Moore added that this ability to manipulate and work out and exacerbate these factions kept Mugabe in power and Zanu PF unified to a degree even though the unification was based on subterfuge, lying, deceit and playing groups against each other.

“It is a complicated and contradictory legacy how this shy, almost paranoid guy managed to stay on top of the heap and created also a culture of corruption, even though he would say, we need a leadership code,” Moore said.

The emergence of the political party MDC led by trade unionist Morgan Tsvangirai in 1999 unnerved Mugabe. Mugabe’s turned to violence in the elections in 2000, 2005 and 2008 of which the opposition claims to have won outright.

Violence in the form of beatings, torture and of late kidnappings became emblematic of Mugabe’s intolerance of dissenters. Individuals and civil society were not spared.

Human rights activist an Mugabe critic, Jenni Williams, was a victim. As the national coordinator of Women of Zimbabwe Arise (WOZA), she was arrested a number of times as the organisation continues to pursue a “non-violent struggle for socio-economic rights”.

“Unfortunately Mugabe’s leaves a legacy of repression and persecution which overshadows any good he may have done,” Williams said.

“I find it hard to mourn a man who caused me such personal persecution and suffering. Under his rule and orders I faced arbitrary arrest, inhuman and degrading treatment and constant persecution by prosecution. I am just one of many who suffered the mayhem of his rule and hatred of the people of Matabeleland leading to mass murder.”

Williams says the dictatorship system Mugabe nurtured is still in place and no real development and economic recovery can be achieved without serious reforms at all levels. Therefore poverty levels are systemically increased out of cruelty.

Burying Mugabe will close a chapter in the life of founding figure but the economic and political fortunes triggered from his rein are worsening.

It is not only food that Zimbabwe is in short supply of these days. Many other things, such as lack of health care and education, can be traced to the ill-informed policies that Mugabe enforced in securing his hold on power.