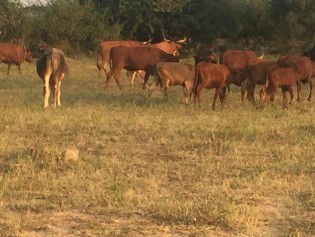 By Jeffrey Moyo
Edious Murewa has for years boasted of owning a 10-hectare piece of land, but now the 52-year-old is full of regrets. He faces poverty years after he invaded part of a farm once owned by a white commercial farmer.

By Jeffrey Moyo
At his house in Mabvuku, a high-density suburb in Harare, the Zimbabwean capital, 86-year-old Tinago Murape claims his grandchildren starve him. Not only that, but Murape, who now walks with the support of a walking stick, said his three grandchildren – grown-up men with their wives and children living in his house, accuse him of bewitching them.

By Jeffrey Moyo
In Chitungwiza, right next to the highway, 36-year-old Nesbit Gavanga and his five colleagues use shovels as they load trucks with sand. The six apparently are in the business of sand-poaching and openly explain that every other day they engage in running battles with environmental officials who seek to curtail land degradation here. The group’s informal sand quarry lies 25 kilometers southeast of the Zimbabwean capital Harare.

By Ignatius Banda
Before Zimbabwe imposed lockdown measures last March as part of global efforts to curb the coronavirus pandemic, Grace Mashingaidze* would attend workshops in Harare arranged by a nongovernmental organisation assisting trafficked women who had safely made it back home.
Next Page »
ADVERTISEMENT ADVERTISEMENT