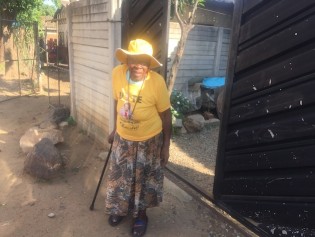 By Jeffrey Moyo
Emaciated and with their ribs jutting out, Evans Sinyoro’s cattle lie on the ground overlooking a dry patch of land while the small earth dam nearby is also dry, thanks to the El Nino-induced drought wreaking havoc across Zimbabwe.

Tichaona Muzariri, 44, a villager based at Range in Chivhu, a town 143 kilometers south of Harare, the Zimbabwean capital, quit his job as a teacher in 2009 to start a rabbit farm on a small scale with three does (female rabbits) and one buck (male). With around US$30 as capital, Muzariri waded into rabbit farming back then. Today, his rabbit farm breeds nearly 3,000 rabbits every year and slaughters up to 120 every week for sale to grocery stores, restaurants and hotels.

By Miriam Gathigah and Jeffrey Moyo
Keziah Juma is coming to terms with her shattered life at the shanty she shares with her family in Kenya’s sprawling Kibera slum where friends and relatives are gathered for her son’s funeral arrangements. While attending an antenatal clinic, Juma who is only 16 years discovered that she had been infected with HIV. “I went into shock and stopped going to the clinic, that is why they could not save my baby and I have been bed-ridden since giving birth two months ago,” she told IPS.

By Jeffrey Moyo
With unusually hot and dry weather beating down on this Southern African nation, climate change and the accompanying drought have cost farmers much of their cattle herds. In response, many ranchers are turning to goats to preserve their livestock assets.
Next Page »
ADVERTISEMENT ADVERTISEMENT