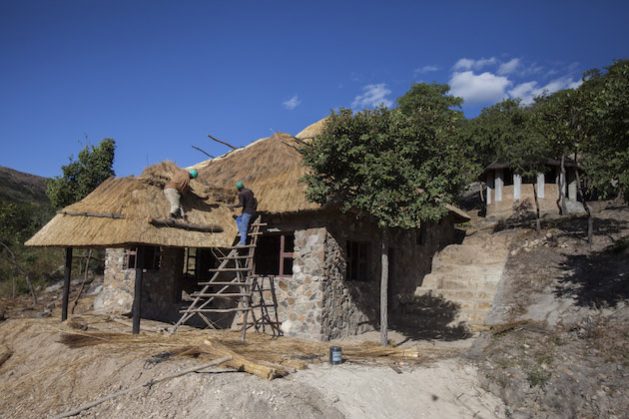 Workers pictured at a home in Zimbabwe’s Mwenezi rural district, where 44-year-old Davison Chihambakwe, based in neighbouring South Africa, has helped upgrade and modernise some of the houses belonging to his family. He uses the money he sends after fleeing this country’s economic hardships 15 years ago. Credit: Jeffrey Moyo/IPS

Harare, May 31 2022 (IPS) - Two decades ago, Trynos Mahamba left Zimbabwe for the United Kingdom, but back home, he has changed the lives of his relatives.

Since the day after he left, Mahamba (53) has been sending money home while Zimbabwe’s economy faltered amidst violent land seizures from commercial white farmers during Zimbabwe’s land reform programme.

In neighbouring South Africa, 44-year-old Davison Chihambakwe, who left this country in 2007, claims he has built a giant construction empire, and, with it, he said, has also made a difference back home.

Even in neighbouring Botswana, 39-year-old Langton Mawere, who left Zimbabwe in 2008 at the height of its economic crisis, has ‘made it’ back home. He has set up a property business by sending money for developments managed by others on his behalf.

Speaking from the United Kingdom, Mahamba says he sends money to his aged parents living in the Zimbabwean capital Harare. The money reaches them through WorldRemit – a money transfer company.

“I have made sure that without failure, I send about 2000 Pounds (sterling) to my ailing parents who are now in their eighties because they need monthly medical check-ups and food as well,” Mahamba told IPS.

“None of my close relatives or family members are suffering back home because I make sure I send them money to meet their daily needs.”

He sends the money through another international money transfer company Western Union, to his relatives like 32-year-old Denis Sundire, based in Harare.

Sundire says that his SA-based cousin has supported him since college.

“Davison (Chihambakwe) supported me since my college days, and even to this day, as I struggle to get a job, he still sends me money for my upkeep. That’s why he is becoming more and more successful. He is so kind,” Sundire told IPS.

Zimbabwe battles 90 percent unemployment, according to the Zimbabwe Congress of Trade Unions (ZCTU), although the government has downplayed that to 11 percent, claiming people are working in the informal sector.

Mahamba, Chihambakwe and Mawere all said they fled this Southern African country searching for greener pastures as economic hardships visited this country.

As a result, hundreds of Zimbabwean economic migrants who fled this country have over the years become the panacea to the African nation’s worsening financial woes.

Zimbabwe’s economic migrants like Mahamba, Chihambakwe and Mawere are breathing life into the country’s faltering economy through the remittances they send back home.

Chihambakwe boasts of modernising his rural village in Masvingo province in the Mwenezi district. He claimed he has helped some of his poor villagers build modern houses, doing away with the thatched huts.

For many like Chihambakwe, helping his village and loved ones from his South African base has also increased diaspora remittances into Zimbabwe’s economy.

According to the Ministry of Finance, remittances from outside the country were said to have reached US$1,4 billion in 2021, up from US$1 billion a year before.

Yet even as Zimbabwe’s economic migrants in countries like South Africa make strides, they frequently face xenophobic sentiments and, at times, attacks.

In South Africa, the Quarterly Labour Force Survey (QLFS) results for the fourth quarter of last year showed the official unemployment rate reaching over 35 percent, the highest rate since 2008, when the QLFS began.

He (Motsoaledi) made the remarks on foreign nationals at an ANC regional conference in the Eastern Cape in South Africa.

Referring to migrants that he said have flooded South Africa, Motsoaledi said, “something is going wrong in our continent, and SA is on the receiving end.

“When people do wrong things in their countries, they run here.”

“We are the only country that accepts rascals. Even the UN is angry with us that SA has a tendency, because of something called democracy, to accept all the rascals of the world,” the South African Minister was quoted saying.

As Zimbabwean migrants breathe life into their country’s struggling economy via remittances, with xenophobia climbing to new heights in South Africa, a gardener, 43-year-old Elvis Nyathi from Zimbabwe, was this year stoned by a mob in the neighbouring country before being burnt to death ostensibly for being a foreigner.

Dlamini was arrested and now faces housebreaking, theft, and malicious damage to property charges after Dudula members descended on a suspected “drug house” in Soweto in March.

However, even within the ruling ANC, there have been mixed messages about the operation, with some indicating support, although SA President Cyril Ramaphosa distanced his government from the Dudula machinations.

“The concerns that we have is that we have got a vigilante force-like organisation taking illegal actions against people who they are targeting, and these things often get out of hand, they always mutate into wanton violence against other people”, Ramaphosa said.