This feature is part of a series to mark International Women’s Day, March 8. 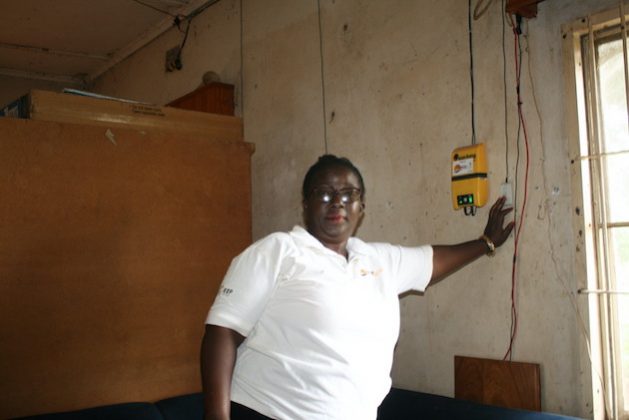 Chiedza Murindo decided to do something about the power poverty in rural Zimbabwe. She installed a three-light solar home system and now has light. Women are playing an increasing role in alternative energy strategies. Credit: Tonderayi Mukeredzi/IPS

Harare, Zimbabwe , Mar 4 2022 (IPS) - Electricity transmission lines run through Chiedza Murindo’s home in Murombedzi, a small town in Zvimba district in Mashonaland West province, but her house has no electricity. That is the harsh reality for much of Zimbabwe’s rural population, where only 13% of households live without power compared to 83% of urban households.

Disgusted by the energy poverty around her, Murindo became one of the first customers in her area to purchase a three-light solar home system from PowerLive Zimbabwe. This woman-led social enterprise uses mostly women to sell, distribute and install solar energy systems on a pay-as-you-go (PAYG) model to off-grid rural households.

“The Home 60 has three lights, including a sensor light. We don’t have electricity right now, so we use the system to light the home, charge phones, and security at night. Our neighbours who don’t have the system also come to charge their phones with us,” she tells IPS.

Murindo, a teacher at Sabina Mugabe High School, is among dozens of women that PowerLive Zimbabwe has employed to sell and install its products.

“I get a commission for the sales I make from marketing and selling the solar systems, so that adds to my income and help in bringing food to the table,” she says.

“I’ve always wanted to do something to empower the girl children. The ‘how’ part came later. But having worked for a solar energy company, I thought I could provide solar systems to off-grid rural areas with women as our sales agents. After all, women are more affected by energy poverty,” Yeti, who founded the company in 2018, tells IPS.

She says the project has raised the standard of living for many households, particularly women whose confidence has grown because they can earn money. Children benefit from being able to study after dark. And people’s health has improved away from the toxic use of fuel-based lighting.

Since its inception, the energy start-up has distributed 4 789 solar homes systems to over 20 000 households in ten of the country’s districts. The project isn’t just focused on solar lights but distributes solar products for productive uses like solar water pumps, fridges, hair clippers and entertainment.

According to the African Development Bank, Africa has the highest percentage of women entrepreneurs globally. Yet, they face a cocktail of gender-specific challenges in accessing finance, with a finance gap of around $42 billion.

But for a start-up, Yeti’s PowerLive has been particularly lucky in accessing finance. In 2020, it got a 350 000 Euro grant from a clean energy financier, EEP Africa; then, in late 2020 and 2021 secured a combined US$400 000 from the Energy Access Relief Funding (EARF) and the Distributed Finance Fund (DFF).

“The funding had helped us a lot, to buy more systems, employ more sales agents, and employ more people and pay salaries when we were in lockdown for seven months,” she says.

“Going down to December 2020, we hadn’t made any sales, and in as much as we were paying salaries, we had no income, our customers were not paying, and our stock had run out. So, it was a challenge. That’s when we got funding from AERF, meant to assist companies that had been affected by COVID-19.

“It came just at the perfect time when I was beginning to think we need to start downsizing, but we didn’t, which was also the same for the funding from the DFF. It just helped us get more stock and to maintain people,” she says. 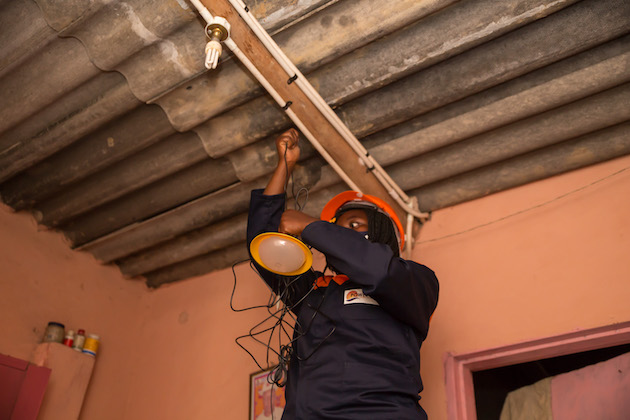 Dorothy Hove, executive director of Women Resource Centre Network, a gender and development organization, says the establishment costs of available renewable options like solar were still high for rural households, who are unwilling to change from traditional energy sources to modern technology.

Although girls and women are primarily responsible for the bulk of household work, access to modern energy alternatives was not sufficient to guarantee gender equality.

“Women can play a key role in the green energy transition as responsible consumers, particularly in the household, but also in business and policymaking where measures to support greater access by women to clean and affordable renewable energy are lacking.

“Women’s empowerment and leadership in the energy sector could help accelerate the transition to a low-carbon economy by promoting clean energy and more efficient energy use, as well as help to tackle energy poverty. The just transition should also include a gender perspective, to guarantee equal opportunities for both men and women in the workforce,” she says.

According to a 2019 report from the International Renewable Energy Agency (IRENA), renewable energy employs about 32% of women globally compared to 22% in the energy sector overall.

In Zimbabwe, Hove estimates women account for less than a quarter of employees in the energy sector, which decreases with seniority levels.