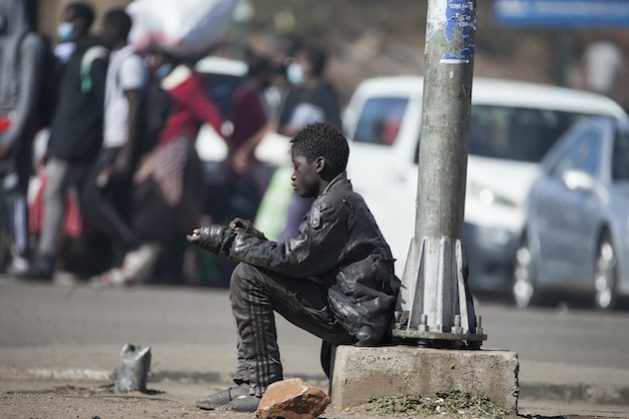 Rising inflation and the Ukraine war has added to the woes of Zimbabweans, where even the middle class struggle to buy a loaf of bread. Credit: Jeffrey Moyo/IPS

Harare, Aug 19 2022 (IPS) - With inflation at 256.9 percent, 49-year-old Dambudzo Chauruka can no longer afford to buy bread despite working as a civil servant in Zimbabwe.

Bread now costs 1,30 USD in Zimbabwe, up from 0,90 cents five years ago when former Zimbabwean President Robert Mugabe was toppled from power in a military coup.

Not only that, but the cost of a kilogram of choice beef has risen to 9 USD, while five kilograms of chicken drumsticks now cost 21,000 Zimbabwean dollars, about 22 USD.

“I can’t afford bread every day. If I spend money buying bread every day, I will run out of money to pay rent and buy groceries for my family,” Chauruka told IPS.

In May 2022, the Consumer Council of Zimbabwe said a family of five required 120 000 Zimbabwean dollars a month in local currency to survive, about 300 USD. Still, it could be much higher this time amid ever-rising inflation.

Amidst galloping inflation, petrol price in Zimbabwe has fluctuated, a major determinant in the pricing of basic goods and services here.

From 1.77 USD per liter recently, petrol now costs about 1.60 USD even as it was pegged at 1.41 USD in January before war broke out in Ukraine following the invasion of the East European nation by Russia.

As a result, for many underpaid working Zimbabweans like Chauruka, starvation has pounced as they grapple with the country’s galloping inflation and subsequent poverty in the towns and cities where they live.

Chauruka and his family are residents of Kuwadzana high-density suburb in the Zimbabwean capital, Harare.

Now with the ongoing Russia-Ukraine war slowing down food exports to many developing countries like Zimbabwe, many urban dwellers like Chauruka and his family have had to contend with starvation amid rising food prices.

Since the start of the Russia-Ukraine war, according to the Grain Millers Association of Zimbabwe (GMAZ), wheat prices have surged from 475 USD to 675 USD per tonne.

As a result, bread for many urban dwellers known for years to afford it has suddenly turned into a luxury.

For urban Zimbabweans who have to party with their hard-earned money to put every morsel of food on their tables, the agreement would import smiles as well.

One Zimbabwean, relieved at the news, is 57-year-old Nyson Mutumwa, a senior government employee.

“Now, I’m optimistic the Russia-Ukraine deal to unblock food passages to countries wanting food imports would relieve many nations of food shortages and cause a fall in food prices,” Mutumwa told IPS.

Russia and Ukraine are among the world’s biggest food exporters, especially wheat, to developing countries like Zimbabwe.

Yet Russia’s invasion of Ukraine this year led to a de-facto blockade of the Black Sea, resulting in Ukraine’s grain exports sharply dropping.

With the new agreement between the warring countries, even retail shop owners in Harare, like 48-year-old Jonathan Gunda in Mbare, the oldest township in Harare, are in high spirits.

“I had suspended the selling of bread and buns. In fact, I had canceled selling off all wheat products, but with the new agreement between Russia and Ukraine, this may mean I will be back in business,” Gunda told IPS.

“SADC region has water, has land, has clever people, so we are able to produce in this region. Let’s diversify and let’s produce for ourselves,” WFP’s Haile said then.