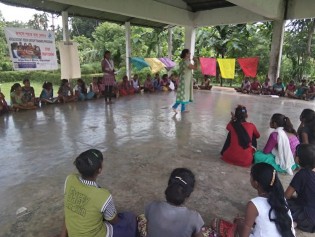 By Rina Mukherji
Fourteen-year-old Priti Pyne was returning from school in Basra village in South 24 Parganas, West Bengal, when she and a friend came across a cold-drink seller selling an attractive-looking drink. The moment the girls sipped it, however, they felt dizzy. When they woke up, it was on a Delhi-bound train at Sealdah station in Kolkata. With the help of other passengers, the girls managed to get off the train.

By Rina Mukherji
One of the worst fallouts of the COVID-19 pandemic has been the closure of industries in India, which caused thousands of migrant labourers to return home to villages in Uttar Pradesh, Bihar and Bengal. In a region where the poorest have always been subjected to bonded labour, child labour and slave trafficking, it has meant revisiting the past.
ADVERTISEMENT ADVERTISEMENT