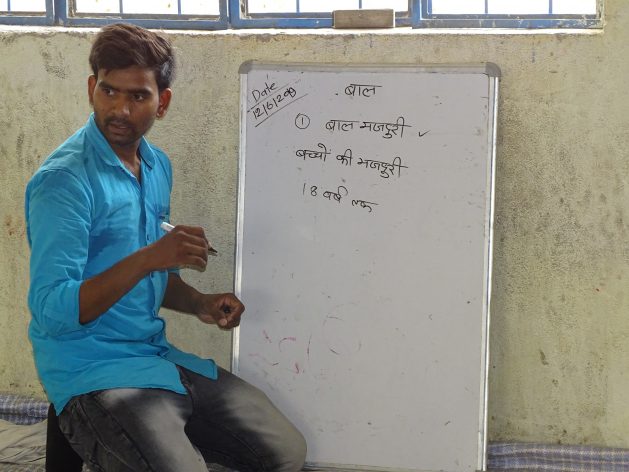 Trafficking survivor Devendra Kumar Mulayam, who hails from Shahapur in the Chandouli district of Uttar Pradesh, had to begin working at age 12 to help pay off the two loans his father had taken out. Credit: Rina Mukherji/IPS

PUNE, India, Sep 22 2020 (IPS) - One of the worst fallouts of the COVID-19 pandemic has been the closure of industries in India, which caused thousands of migrant labourers to return home to villages in Uttar Pradesh, Bihar and Bengal. In a region where the poorest have always been subjected to bonded labour, child labour and slave trafficking, it has meant revisiting the past.

Of late, as the country has progressed into a loosening of COVID-19 restrictions, and some workers — who comprised the bulk of the skilled labour in industrial belts — have returned to work.

Bonded labour formally ended in India with the passing of the Bonded Labour System (Abolition) Act, 1976.

But in the underdeveloped districts of Uttar Pradesh and Bihar, where feudal lords exploited the lower castes and had them work for free on their lands in the past, it continues to exist in invisible forms, drawing sustenance from within the casteist social structure that has confined Dalits and Mahadalits to illiteracy and grinding poverty.

The Mahadalits, are especially vulnerable, with their abjectly low literacy of 9 percent, as compared to the Dalit literacy level of 28 percent. First-generation learners for the most part, the Dalits and Mahadalits are generally unable to access government schemes that guarantee a better future. Often, the inability to pay back a small loan of Rs 5,000 ($68) or Rs 2,000 ($27) sees entire families being bound into slave or bonded labour in brick kilns, or farms owned by the person they are indebted to for generations.

At times, families are forced to pledge a minor child to work for an unscrupulous trafficker, according to the Freedom Fund.

The health infrastructure in eastern Uttar Pradesh and in Bihar districts along the Nepal border has always been wanting.

While the COVID-19 pandemic may have worsened the situation but matters become compounded as many villages in Bihar faced the fury of unprecedented floods last month, which saw almost 8.4 million people affected.  Integrated Child Development Services (ICDS) centres in Bihar have collapsed, with the unprecedented floods straining them to the hilt.

Children are more at risk because of the current circumstances than previously.

Human trafficking for slave or bonded labour may either see a child being sent to a place thousands of kilometres away from home, or across the border into Nepal. Within India, the modus operandi involves sending children from Uttar Pradesh, Bihar or Bengal to a southern state where unfamiliarity with the local language prevents the child labourer from escaping or negotiating a way out and returning home.

With so few options, parents are sometimes lured with a lump sum of Rs 5,000 ($68) to Rs. 10,000 ($136) paid in advance, as Manav Sansadhan Evam Mahila Vikas Sansthan ( MSEMVS) executive director Dr. Bhanuja Sharan Lal told IPS. MSEMVS is an NGO that focuses on the eradication of child labour.

No option but to make children work

But the stories many of the survivors have to relate are harsh.

Wage labourer Umesh Mari from Mayurba village in Sitamarhi district in Bihar, had to take a loan of Rs 300,000 ($4,080) for his wife’s medical treatment.

Since Sitamarhi lacks healthcare facilities needed for serious medical problems, the family had to admit her to a hospital in the adjoining district of Muzaffarpur.

Unable to repay the loan, the family, comprising of four children and son-in-law, had no option but to look for additional, better-paying jobs.

It is how 13-year-old Ramavatar and his brother-in-law Kesari were recruited for a tile fitting job across the border, in Malangwa in neighbouring Nepal. The job promised a wage of Rs 300 ($4) per day. Once there, they found that the conditions entailed working from 9 am until 7 pm with just a half-hour break. It was bonded labour.

There was little food, and erratic or no payment for months. The recent COVID-19 lockdown helped Ramavtar escape and return to his village, as IPS found. However, the family remains worried on account of their unpaid loan. Chances are, Ramavatar may find it hard to resist the trafficking mafiosi, and may have to return to an enslaved existence in bonded labour in another factory once again.

Take the case of Devendra Kumar Mulayam, who hails from Shahapur in the Chandouli district of Uttar Pradesh. The second among five siblings of a landless Dalit family, Mulayam  told IPS how the family became desperate for a source of income following two loans that his father had to take — one was for the marriage of his elder sister marriage and second following an accident that resulted in this elder sister sustaining a sever head injury, which occurred after her wedding.

As the eldest son in the family, 12-year-old Mulayam had to drop out of school and start looking for a job, while his younger siblings had to forgo their education.

Courtesy of a recruiter, Mulayam soon found his way to a textile factory in Coimbatore, where he was hired as a loader, at Rs 150 ($2) per day in 2010.

He was made to work for 12-15 hours each day, and the payments were erratic. Worse still, he had to pay for his own treatment wherever he was injured during work.

Mulayam and his fellow-workers remained closely guarded and were never allowed to move away from either their workplace or living quarters.

Any breach of “discipline” or error at work invited severe beatings. In 2011, when things became unbearable, Mulayam and 18 other fellow workers decided to protest. Theirs was one of the worst forms of bonded labour.

Recounting the horror, Mulayam told IPS, “We were heavily assaulted, and thrown out. Scared of being rounded up by the police and sent back to the clutches of our tormentors, we kept hiding in the forested tracts adjoining the town, for five days. Thankfully, I could manage to tell my family members back home of my plight. They sought the help of a local NGO, which managed to secure my release and arrange for my  return.”

Despite the pandemic, children are still being bonded.

“We recently rescued nine children from Jaunpur in Uttar Pradesh who were trafficked to a panipuri [an Indian snack]   factory in Telangana after their parents were paid an advance of Rs 10,000 each.  Once there, they were made to work from 2 am every morning to 4 pm in the evening. They were only given their meals, and had to work for free. Similar circumstances had driven eight children from Azamgarh (in Uttar Pradesh) to a textile factory in Gujarat where they were used as slave labour,” Lal told IPS.