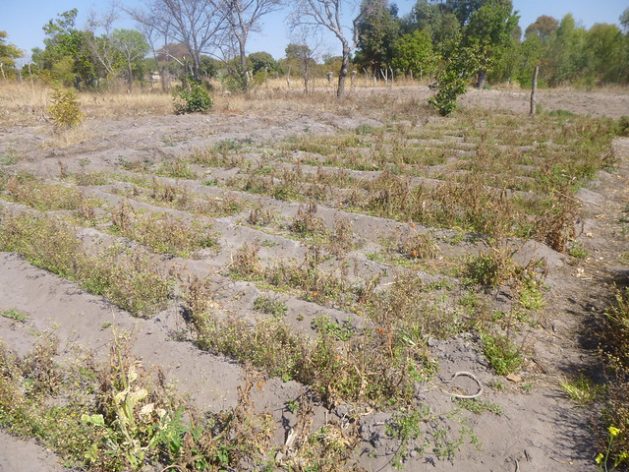 Earlier this year, the Zimbabwean government announced that it would take over all under-utilised land and redistribute it to deserving farmers, irrespective of their race and colour. Credit: Jeffrey Moyo/IPS

MARONDERA, Zimbabwe, May 28 2019 (IPS) - For subsistence farmer Rogers Hove—who proudly brandishes a worn out letter for his five hectare piece of land he obtained from government following the chaotic land seizures from white commercial farmers over two decades ago—what matters most to him, “is to see my piece of land in my possession”.

At the age of 78, Hove has little else to show for the land he owns.

Hove has not made much money from it. Other than three thatched huts built from plain home-made brick, there is not much else on the land, let alone cattle—the ownership of which is regarded as a symbol of wealth.

“One day things will be alright and I may be able to farm productively the same way white farmers used to do here before we stepped in to take over our land,” Hove tells IPS.

But 20 years ago, Hove was 58 when former President Robert Mugabe’s government embarked upon a violent land reform programme that saw many black Zimbabweans taking ownership of huge swathes of land once occupied by white farmers—who were loathed by the now 95-year-old former Zimbabwean president.

Despite boasting of owning one of the most fertile pieces of land in Mashonaland East Province, Hove admits that many resettled farmers like himself have fallen on hard times.

“Yes, I have this land, but since I took over, I have not produced much because I have no means to do my farming properly. Other farmers who have the means often have to assist me, but that has not changed anything either,” Hove says.

Instead of tending to the farm, Hove’s wife, Agness, 70, is busy by the roadside selling trinkets and cigarettes to passersby.

“Maybe we will have food if I do this. We have nothing from our farm. Well-wishers give us handouts,” Agness tells IPS.

All their seven children have their own families living far from their aged parents, who have fixed their hope on the piece of land they invaded during the country’s chaotic land reform programme.

In Zimbabwe, it never rains, but pours for underperforming farmers like Rogers and Agness. Under President Emmerson Mnangagwa’s government, many of these farmers risk losing their land.

Earlier this year, the Zimbabwean government announced that it would take over all under-utilised land and redistribute it to deserving farmers irrespective of their race and colour.

Briefing parliament at the time, Douglas Karoro, Zimbabwe’s deputy Minister of Lands, Agriculture, Water, Culture and Rural Development, said “in the event that the government decides to distribute the land to people, it’s our policy to make sure that the distribution exercise is done fairly.”

But before struggling resettled farmers like Rogers face the boot from their land, for now the Zimbabwean government awaits completion of a land audit in order to implement the new policy.

At the time the then agriculture minister Douglas Mombeshora was quoted as saying, “what we are doing now is identifying farms and plots where land is not being utilised at all or not being used to its potential with a view to distributing it to others.”

Farmers like Hove pin the blame on government for their failures to successful farm the land seized from white commercial farmers.

“Government has always promised to help us with inputs to improve our farming, but only those that support the ruling Zanu-PF party benefit from the inputs while the majority like us suffer on the land we say we now own,” says Hove.

As such, the 71,000 families who resettled on farms once owned by white commercial farmers face an uncertain future.

Consequently, hunger has not spared them either as they have become victims of the country’s incessant droughts despite owning swathes of rich agricultural land.

“I have each year depended on food from donor organisations as my land hardly gives me adequate food since I settled here in 2001,” Menford Mutimbe, a 71-year old resettled subsistence farmer from Marondera, with eight children and two wives, tells IPS.

However, Zimbabwe’s resettled farmers have no guarantee of ownership to the pieces of land they repossessed from white farmers.

So for them, according to other farmers like Mutimbe, “getting capital from banks to sustain our farming activities is hard.”

“What we have are mere offer letters which banks have not taken in as collateral although government has made efforts to have our 99 year leases used as collateral to help us get loans,” Mutimbe said.

Last year, Zimbabwe’s central bank agreed to accept 99-year leases from resettled farmers as collateral after government changed the law to allow the 99-year leases to be transferable and bankable.

Despite the move, suffering continues for struggling farmers like Hove who says “banks are rejecting my lease for no clear reasons.”

Independent economists like John Robertson know the reason for this.

Soon after the government declared the state to be the owner of all land in the country, even the 99-year leases cannot be trusted.

“Government resented the influence of commercial farmers and decided that the best way to dis-empower them was to take away their property rights. They portrayed the move as a means to redress racial imbalances that were imposed by colonisation, but government also cancelled the ownership rights of black farmers,” Robertson tells IPS.

Ben Gilpin, director of the Commercial Farmers Union (CFU), says the situation for resettled farmers is different as “former commercial farmers had property rights that enabled them to finance short-, medium- and long-term capital requirements.”

“Once these were undermined, the financial sector fled. Former farmers were responsible for the risk involved…if they failed, the lenders would have recourse,” Gilpin tells IPS.

Yet as resettled farmers like Hove cling to the hope of using their leases as collateral to get bank loans, Robertson has nevertheless painted a grim picture about this optimism.

“The collateral value of the land was cut to zero when the government declared all agricultural land in the country to be the property of the State. This meant that the farmers could not offer title deeds to the banks as security for loans; so ever since Land Reform, the farmers had no access to bank finance,” says Robertson.

“My main analysis is that Zimbabwe’s economy is in bad shape; it affects agriculture. It’s ridiculous to expect agriculture to do well when the country’s economy is choked. Financial markets are not doing well. Where can government get money to support them (resettled farmers)?” Rukuni tells IPS.