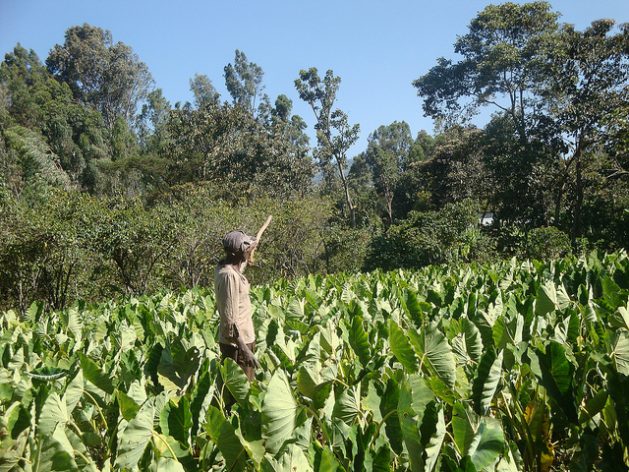 ILLINOIS, United States, Mar 15 2019 (IPS) - The latest UN Food and Agriculture Organization’s annual Africa Regional Overview of Food Security and Nutrition Report highlighted drought as one of the key factors contributing to the continuing rise in the number of hungry people in sub-Saharan Africa. And in South Africa, the Government’s Crop Estimates Committee announced that the country would harvest 20 percent less maize in 2019 because of drought conditions.

Drought, a period of inadequate rain or no rainfall, is the main cause of crop yield loss in Africa, ultimately causing food insecurity and famines. In early 2018, over 15 million people from countries ranging across the continent — including Somalia, Ethiopia, South Africa and Kenya — were affected by drought.

Drought isn’t uncommon in Africa. It happens somewhere on the continent every year. But weather patterns are becoming more unpredictable, as well as more severe. For example, the droughts of 2014, 2015, 2016, and 2017 made headlines across the continent and total cost the region an estimated at USD$ 372 billion.

To deal with this, various stakeholders — from national governments to non-governmental organizations — have used different approaches, like food aid and funds, safety net systems ( like water storage) to help cover citizens during droughts and the implementation of irrigation schemes. But to ultimately become drought resilient, Africa’s smallholder farmers must grow drought tolerant crops. Growing drought tolerant crops has many benefits including increasing on farm crop yields.

Drought tolerant crops — like maize, cowpeas and rice — have been bred through conventional plant breeding techniques or biotechnology and continue to grow and produce even when rains fail. They’ve been around since the 20th century, but the last two decades have seen an increase in drought tolerance research that targets staple crops like maize, rice and wheat.

Nonetheless, the uptake of  these crops has been promising. Though the scale with which they are adopted by farmers varies by country, about 40 million smallholder farmers across sub-Saharan Africa benefit are using more than 200 drought tolerant maize varieties, benefits that include increases in crop yields.

But, there are still several hurdles to overcome.

For example, unlike traditional seeds, drought tolerant seeds have to be bought every year. Though drought tolerant crops produce seeds, they lose some of their drought protection capacities so farmers are encouraged to buy new seeds, not save them from the previous harvest. Many farmers are afraid of being locked in this cycle of financial obligation.

Secondly, just like any other new technology, there are several determinants to whether it’s successfully adopted by farmers. For the case of drought tolerant crops, research shows that early adopters to drought tolerant maize are more educated and have better access to agricultural extension personnel.

Nevertheless, research has demonstrated that the pros of adoption, and costs involved, outweigh the cons. And the good news is that drought tolerant crops are available across Africa. For the past decade, institutions like the International Maize and Wheat Improvement Centre, Kenya’s Agricultural Research Institute and private foundations like the Bill and Melinda Gates Foundation have invested in breeding and strengthening the adoption of drought tolerant crop varieties across the continent.

Importantly, there are benefits of planting drought tolerant crops including producing larger crop yields. According to research, planting climate resilient maize varieties in most environments leads to 25% more crop yield. This is because these crops are still able to grow in periods when the rains fail. In Zimbabwe, for example, farmers earned USD$240 more per hectare when they planted drought-tolerant maize varieties because of larger yields.

Of course, even though there are benefits to planting drought resistant varieties, they aren’t a silver bullet. There are other steps farmers must take to make the most out of planting these tolerant varieties. For example, they must still look after the health of soils and practice mulching — covering soil between plants with a layer of material to keep the soil moist — to keep moisture in during periods of drought.

But they are still a smart strategy and investment for Africa’s smallholder farmers. They offer a buffer to drought, both now and in the future, bringing greater yields, improved incomes and increased food security.

Esther Ngumbi is Distinguished Post Doctoral Researcher, Entomology Department at the University of Illinois at Urbana Champaign, Illinois. She was the 2015 Clinton Global University (CGI U) Mentor for Agriculture and 2015 New Voices Fellow at the Aspen Institute.