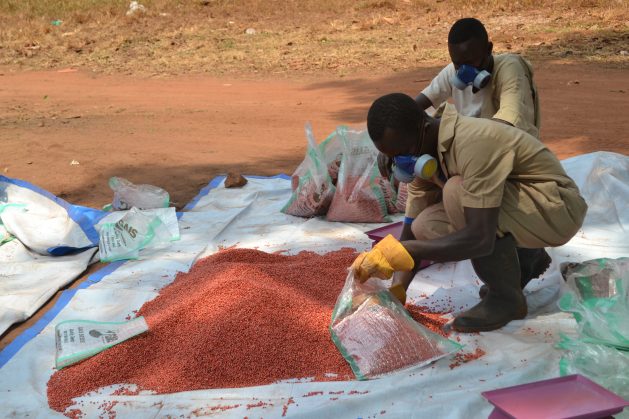 Former rebel fighters from South Sudan’s civil war, manually packing improved sorghum seed in Yambio, South Sudan. over 1,900 ex-fighters have been taken through rehabilitation programmes, and have been released to join vocational training and engage in agribusiness, with others being integrated into organised forces. Credit: Isaiah Esipisu/IPS

“We are preparing our land this early because we are never sure when it is likely going to rain, and yet we cannot afford to miss out on the seed production programme, which is our new source of livelihood,” said Antony Ezekiel Ndukpo, a father of 19 children and a smallholder farmer based in Yambio region.

Africa’s youngest nation does not have reliable weather and climate information services, and this forces farmers to rely on traditional methods of forecasting, which are no longer accurate due to what experts say is climate change. However, the process of multiplying drought-tolerant seed is being taught to local farmers through a new initiative meant to promote peace in the country.

The Alliance for a Green Revolution in Africa (AGRA), in collaboration with the Gbudue State and the Netherlands government, is working with a local seed company and local smallholder farmers to produce fast-maturing improved seeds of different, drought-tolerant crop varieties that can be planted in the coming seasons by thousands of young men and women fighters who are returning home from the conflict.

Since 2013, South Sudan has experienced war between the government and opposition chiefs, which has led to deaths of thousands and the displacement of hundreds of thousands. According to the United Nations, since 2013 “more than 2.2 million refugees have fled across the border, famine in some areas, and a devastated economy.” 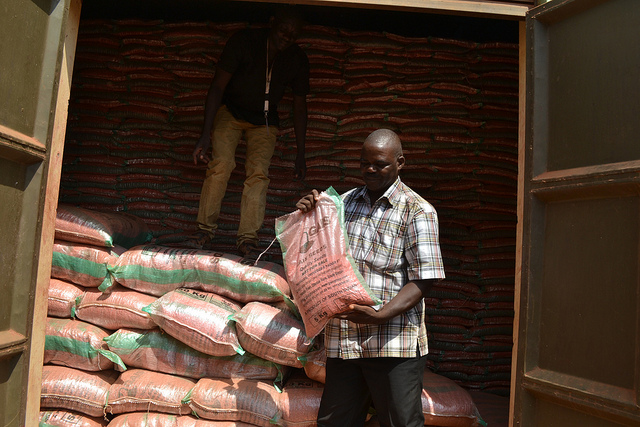 Antony Ezekiel Ndukpo with a packet of certified maize seed that he and other smallholders like him have produced in Gbudue State. Local smallholder farmers are being taught to produce fast-maturing improved seeds of different drought-tolerant crop varieties. Credit: Isaiah Esipisu/IPS

Farmers are taught how to take the pure versions of breeder’s and foundation seed and produce certified seed.

Breeder’s seed is produced from a pure or nucleus seed. This is further bred under supervised conditions into foundation seed for the sake of producing certified seed.

“As much as we are seeking peace, we must face the reality and use climate-smart techniques so as to make a meaningful change especially for a country that has just been at war,” said Dr Jane Ininda, a plant breeding expert at the AGRA.

“We need to give farmers drought-tolerant seeds because we are never sure of the climatic conditions ahead, and we need fast maturing varieties to escape the drought in case the duration of the rainy season turn out to be too short,” Ininda told IPS.

Over the course of the last six years a number of peace agreements have been signed, and as a result, many young people who had been recruited by rebel groups have begun returning home. In order to reintegrate them into normal life, the government wants them to start engaging in income-generating activities.

Previously “the government could apprehend and imprison all the ex-fighters returning from the bush,” Pia Philip Michael, the Gbudue State Minister for Education, Gender and Social Welfare, told IPS in an exclusive interview. “But we later found that most of them were children aged between 12 and 17 years, and the best way to help them was to draft a re-integration proposal and implement it.”

According to the minister, nearly all the returnees confessed that they joined the rebel groups because they were promised a constant salary of 200 dollars every month, and “this points to a livelihood issue,” he said.

According to the Governor of Gbudue State, Daniel Badagbu, guns cannot be used to win the war. “All we need is to create jobs, especially for the youth by introducing them to agribusiness and giving them livelihood skills through vocational trainings,” he told a United Nations Mission that visited Gbudue State late February.

In Gbudue State alone, over 1,900 ex-fighters have been taken through rehabilitation programmes, and have been released to join vocational training and engage in agribusiness, with others being integrated into organised forces.

“Creating livelihoods and economic empowerment is the only way of creating peace,” reiterated Badagbu.

“It all begins with seed,” said AGRA’s Ininda. “If we have to make a difference, then we need to avail certifiable seed to all famers, and it should be compatible with the prevailing climatic conditions,” she told IPS.

Unfortunately, the country does not have a system for seed certification in place. AGRA and its partners were forced to import breeder’s and foundation seed from the National Agricultural Research Organisation (NARO) in Uganda.

To multiply, the seed has to be planted in an isolated place, so that it does not collect pollen grains from other varieties of maize to maintain purity. The farmers are also taught about agronomic practices and what works best to ensure good quality seed, how to irrigate the seed in low rainfall in order to sustain growth.

“In the two states, we concentrate on improved seeds of fast-maturing maize varieties, groundnuts, sorghum and cowpeas, which are the most appreciated food crops in these two states,” said Rahul Saharan, the Chief  Executive Officer for GAIS.

The farmers have already produced the first season of foundation seed.

While in most countries these processes are supervised by seed certifying agencies, because there are none present in South Sudan, GAIS does this.

The main aim of the project is to have sufficient seed that can be distributed to many farmers to improve their harvests. The country heavily relies on food aid, and that is evident at the Juba Airports, where the number of United Nations cargo and mission planes outnumber commercial jets.

“We are happy that we can now produce improved seed from our own soils. I believe this will yield better than the seeds we’ve been planting, which were grown in different places with different environmental conditions,” said Ndukpo.

According to the Netherlands Director-General for International Cooperation Reina Buijs, it is only by taking action that peace will prevail in South Sudan.

“It is good to see the government, the private sector, the civil society, the clergy, and the people come together for the sake of peace,” Buijs told IPS. “There can be many nice words on paper, or spoken, but if it does not translate in concrete actions, people cannot believe any more.”

“It feels great to see the donor support being translated into future hope for the people and in implementing the peace agreement,” she said, adding that the Netherlands would be proud to continue supporting such initiatives in South Sudan.